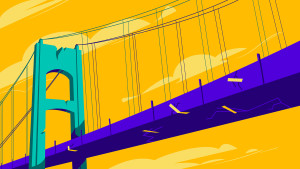 This week, President Trump met with Democratic lawmakers to talk infrastructure and apparently agreed to invest $2 trillion into US roads, bridges, and more.

Wow. And why is it all saying ‘halp’?

It is...sort of. Most federal funding for things like highway maintenance and transit projects comes from the Highway Trust Fund, which gives grants directly to states. But that fund – which relies heavily on a gas tax that hasn’t been raised in decades – is on track to run out of money by 2021. In 2015, President Obama signed a bill greenlighting more than $300 billion for infrastructure over five years. But it still wasn’t enough. And if you did the math, you know that fund expires...next year.

Spoiler, it’s money. The US needs an estimated trillions of dollars to make its infrastructure shiny and new again. The upside is that infrastructure is considered a rare bipartisan issue among Republicans and Democrats. The bump in the road is that they haven’t yet agreed on how to pay for the upgrades. Or which pieces of infrastructure – beyond roads and bridges – will be addressed. We get into the latest funding debate on Capitol Hill in Skimm This.

Enter: the gas tax, the main source of funding for the Highway Trust Fund. It hasn’t been raised on the federal level in over two decades. And there are a lot of opinions about whether that should happen in order to fund infrastructure's piggy bank.

Globally...The US ranks highly on economic competitiveness...for now. But some EU countries – like Norway and Germany – built their infrastructure with resilience in mind. And have an easier time bouncing back quickly after disruptive events like storms and cyberattacks. Without fixing infrastructure – and with the growing threat from things like climate change – the US risks becoming less competitive than countries with infrastructure built to last.

You...When you drive, take a plane, use public transit, use the internet, or drink tap water you’re relying on US infrastructure. That experience can be safe and efficient...or not. Meanwhile, how lawmakers choose to address the issue (or don’t) could impact your wallet at the gas station, during tax season (if parts of Trump’s tax law are reversed to help pay for updates), or potentially years down the road as the US continues to grow its national debt.

Infrastructure touches pretty much every aspect of everyday life. And a lot of it is crumbling. Many see addressing this as an investment in the economy and public safety for future generations. The challenge is figuring out the fine print.