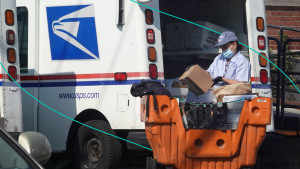 Snail mail is about to have a new meaning. In early October, the US Postal Service started implementing changes that include delayed deliveries on mail and packages, and price hikes for things like stamps and priority mail. The measures are part of a 10-year plan to raise revenue and cut costs for the agency, which has been facing major financial problems for years.

Even if you haven’t mailed a letter since 2009, the changes could impact millions of Americans who rely on the post office. Think: getting medications, shipping holiday gifts, paying bills, and more. So we’re breaking down how the USPS got into this situation, what changes are happening, and how you might feel the brunt of it.

The United States Postal Service is an independent agency within the federal government. And it’s run by an 11-person bipartisan Board of Governors, including the Postmaster General. Which means that the USPS gets zero taxpayer dollars. So it makes money from things like stamps and first-class mail.

But it's been billions of dollars in debt for years. Two key reasons for that are...

We saw these issues come to a head in 2020. First with the coronavirus pandemic, which has drawn the agency further into debt. Businesses and people around the country cut back on letters, mail advertisements, and solicitations – leading to a significant drop in mail volume and revenue. And even though package delivery has gone up, that means operating expenses have also increased. Meanwhile, some people have experienced delivery delays – impacting when they get crucial items.

Then came the November election. A few months before that, Postmaster General Louis DeJoy announced major changes aimed at giving the agency a financial boost. Think: no overtime and reduced hours. The changes caused backlogs of mail and warnings that voters could be disenfranchised as millions were expected to vote using mail-in ballots. After public outcry and criticism from Congress, DeJoy – who didn’t have any experience working under the USPS before taking the job – decided to pause those changes until after the election in order “to avoid every appearance of any impact on election mail.” Which brings us to…

What to Know About the USPS’s 10-Year Plan

Like every Pinterest user back in the day, DeJoy created a 10-year vision board for the USPS. The goal: give the agency a much-needed economic boost. He announced the plans back in March. And says they're needed to ensure more consistent delivery and bring down financial losses. It includes measures like adding new vehicles to its delivery squad (with the goal of going electric) and expanding seven-day package delivery. But there are two key changes starting to impact people around the country…

Not everyone is jumping for (De)Joy over this. Some postal advocates worry the plan will give USPS’s competitors (like FedEx and UPS) a boost. The federal regulator that oversees the USPS says it’s not clear whether these changes will actually make a difference, and that it didn’t test them out in advance. It also recommends that the agency closely monitors things to make sure its plan is actually effective.

How These Changes Could Impact You

Even though society has shifted to communicating via tech more than snail mail, Americans in every corner of the country still rely on the USPS. See: getting paychecks, paying bills, getting prescriptions, filling out Census forms and mail-in ballots. But these changes could have an effect on two upcoming events:

The USPS is a critical part of the country’s infrastructure, providing service to every single person in the country. But it’s struggling to manage its debt – and that’s starting to pour into everyday life and impact those who rely on its critical services.