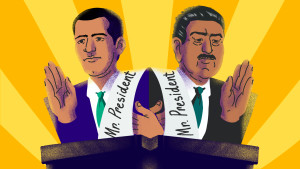 Venezuela’s political crisis has two men calling themselves “Mr. President.” And is raising a lot of questions about the country’s history. Here’s what you need to know about Venezuela's political conflict.

Great. Catch me up.

Venezuela has the world’s largest oil reserves, and its economy is built around oil. In 1998, Hugo Chavez was elected president. He fundamentally transformed the country by using money from the state-run oil company to fund things like subsidized food and free health care and education for poor areas.

Not everyone loved him – he was known for consolidating power, and survived a coup that took him out of office for 48 hours. And his socialist policies meant the country was relying almost solely on its oil exports to keep the economy going.

What happened to him?

Before Chavez died in 2013, he backed Nicolás Maduro – his VP – to become the next president. Maduro went on to win the next presidential election...by less than two percentage points. And it’s been a rough ride ever since.

In 2014, global oil prices dropped reallllly low, and crushed Venezuela’s economy. On top of that, Maduro’s been busy consolidating power since he took office. And his authoritarian government has been blamed for the country’s current crisis, thanks to corruption and mismanagement. The crisis has led to hyperinflation, massive debt, food and medicine shortages, its currency becoming basically worthless, and millions leaving the country. Some blame Chavez and his policies for the crisis too.

Got it. So why am I hearing a ton about this all of the sudden?

Earlier this month, Maduro was inaugurated for a second term after winning re-election in 2018. But a number of countries have refused to recognize his win, alleging that the election was rigged. Last week, after the inauguration and ahead of planned protests, VP Mike Pence said that the US supports Venezuelans’ efforts to oust Maduro. The next day, hundreds of thousands of protesters turned out to pressure Maduro to step down. And opposition leader Juan Guaidó invoked the constitution to act as interim president.

Yes. We’ve got even more Skimm on the crisis – including who backs Guaidó vs Maduro, why the US is involved, and what happens next – in theSkimm app. If you download the app now, you can text us your questions each week on a different news topic and get an exclusive Skimm FAQ. Psst: the first week is free.