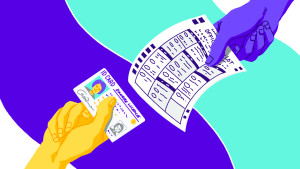 Midterms are coming. And voter ID laws are a hot topic in the election world. As per usual, there are a lot of opinions. Here's your Skimm on the debate.

Why are they so controversial?

Because not everyone has an ID or can get one easily. Many states say 'no ID, no problem.' Others require you to show some face, literally. Think: photo IDs issued by the gov, like driver's licenses and passports.

Some in the GOP say strict voter ID laws prevent voter fraud. Dems say ‘not so,’ they just keep minorities and low-income people from voting. Reminder: it typically costs money to get a government ID, and often costs money to get to the polls.

In the 60s, the US passed the Voting Rights Act to try to say goodbye to racial discrimination at the polls. A part of that required states with a history of discrimination (cough, the South, cough) to get approval from the Justice Department before changing any laws. Then a few years ago, the Supreme Court struck down that part of the law.

Which states are strict?

Seven states — Georgia, Indiana, Kansas, Mississippi, Tennessee, Wisconsin, and Virginia — have laws that require government-issued photo ID. Last year, an appeals court struck down a Texas law — which accepted handgun licenses but not student IDs — saying it discriminated against minorities. Several other states have also been challenged on their laws lately.

Voter turnout has been low, low, low in recent years. That’s partly because people are feeling meh about politics in general, and many think partly because it’s not always so easy to vote. Like most election issues, this one’s not going anywhere.