Voter Restriction Bills and Laws Around the Country 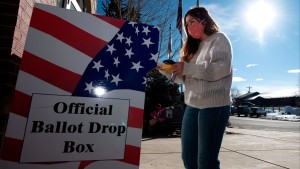 The way you vote is subject to change, and it all depends on where you live. So far this year, 48 states have introduced 389 bills to restrict voting rights (as of May 14), according to the latest report from the Brennan Center for Justice (a nonpartisan law and policy institute). Meanwhile, 14 states have already passed 22 laws making it harder for some to cast their ballots.

All of this came to a head following the 2020 presidential election. After former President Donald Trump lost the election, he and his supporters made baseless claims of widespread voter fraud. We repeat: there is no evidence of widespread voter fraud. But now, legislatures across the country are making moves to tighten the rules on how people vote.

The massive wave of proposed bills and passed laws is giving some flashbacks to Jim Crow-era voting restrictions. Many of the bills and laws target practices like absentee voting and voting by mail. Reminder: these are two policies that helped Americans exercise their right to vote during the pandemic – and in 2020, helped lead to the highest voter turnout in more than a century. Others make it more difficult to vote in-person by restricting early voting, or impose criminal penalties on election officials for doing things like changing election-related deadlines without a court order. While Republicans say these measures can help keep elections safe and secure, Democrats say they infringe on Americans’ right to vote – and that they especially hurt voters of color and voters with disabilities.

Here are the states that have passed voter restriction laws…

One state that has made headlines is Georgia. For the first time since 1992, the Peach State went blue for President Biden in the 2020 election. And in March, Gov. Brian Kemp (R) signed a bill that imposed a number of voting restrictions. He said the law is a step toward making sure "elections are secure, accessible, and fair." Here are a few of the things the law does…

Arizona is another state that approved voter restrictions this year. During the 2020 presidential election, the Grand Canyon State also flipped blue for the first time in 24 years. It previously allowed voters on its Permanent Early Voting List to automatically get sent a ballot via snail mail. But in May, Gov. Doug Ducey (R) signed a bill that would purge people from that list. Here’s how it works: the state’s gov will notify voters who haven’t returned a mail-in ballot at least once during two consecutive election cycles. If they don’t respond to the notice, they’ll be removed from the list. Ducey said the bill is all about “election integrity."

Voters are also getting less of a say in Florida. In May, Gov. Ron DeSantis (R) signed a law that imposes stricter voter ID requirements and added more hoops for those who want to request an absentee ballot (like providing their driver's license or the last four digits of their Social Security number). It also limits drop boxes and requires election officials to monitor them when people drop off their ballots. DeSantis called the new law the "strongest election integrity measures in the country."

The other states that have passed voter restriction laws are: Alabama, Arkansas, Idaho, Indiana, Iowa, Kansas, Kentucky, Montana, Oklahoma, Utah and Wyoming. But there are plenty of others that have at least intro’d bills to make it more difficult for people to vote.

Lawmakers in a number of states (red and blue) have tried or are trying to pass their own laws. Worth noting that not every bill that’s intro’d will be voted on or signed into law.

Let’s start with Texas. It already has strict voting laws and has reportedly introduced 49 voter restriction bills. And in May, Dem lawmakers in the Lone Star State walked out of the House to block a sweeping voting bill that would have made its laws even more restrictive (think: new requirements on absentee voting, banning drive-through and 24-hour voting, and more). But Dems quashed the bill's fate...for now. In response, Gov. Greg Abbott (R) threatened to cut funding for the legislature and said the bill will be added to a special legislative agenda, where the bill could come up for a vote.

Another state that’s making moves: Michigan. State legislators have introduced at least 39 bills that would do things like limit the use of ballot drop boxes, add new photo ID requirements, and ban prepaid postage for absentee ballots. While Gov. Gretchen Whitmer (D) could veto the bill, GOP lawmakers could potentially use a so-called loophole to get the final say.

In response to the flurry of legislation, Democrats have focused on doing the complete opposite of Republicans and are aiming to pass laws that make it easier to vote. According to the Brennan Center for Justice, 14 states have enacted this type of legislation. Some of the highlights:

Meanwhile, back in March, US House Democrats passed sweeping voting rights legislation – aka For The People Act. Here are some of the things it would do…

One concern Republicans have with the bill is that they say it gives the federal government too much authority over elections – an issue that can get complicated since every state administers elections in different ways. While Biden supports it, the Senate hasn’t taken it up yet. (Reminder: the upper chamber is split 50-50, with Dems having the edge because VP Kamala Harris acts as a tie-breaker in votes.)

The potential holdup? Sen. Joe Manchin (D-WV) – who’s considered a swing vote in a divided Senate – isn’t on board with the legislation. He has called it partisan and said that "federal voting rights legislation must be the result of both Democrats and Republicans coming together to find a pathway forward." And even if all Dems were to support the bill, their efforts could still be thwarted with a filibuster. Senate Minority Leader Mitch McConnell (R-KY) said that Republicans won’t "let one party take over our democracy under the false pretense of saving it."

What the Supreme Court is Saying…

This year, the Supremes took up two voting rights cases – considered to be the biggest since 2013. Back then, the Court struck down a key section of the 1965 Voting Rights Act and essentially ruled that states with a history of discrimination no longer had to get the federal gov’s OK before they changed voting laws – giving states more leeway.

This year’s cases focused on two restrictions in Arizona and whether they violate another section of the 1965 law, which bans practices that discriminate on the basis of race (among other factors). They included:

A lower court had previously ruled against the state, but SCOTUS sided 6-3 with Arizona and upheld both restrictions. One of the justices in the majority said the 1965 law doesn’t keep states from passing “non-discriminatory voting rules.” But another who voted in the minority said the ruling discriminates against minority voters.

Here’s what you can do…

Reach out to your elected officials. Let them know where you stand on your state’s voting rights or restrictions bills, and demand they take action. You can find their contact info here.

Register to vote. Voting is one of the best ways to make your voice heard. While federal elections go down every two years (we see you, 2022 midterms), state and local elections can take place any year.

Know your (voting) rights. The ACLU has information on how to exercise your right, resist voter intimidation, and more. And the National Conference of State Legislatures has details on voter ID laws in each state.

Stay informed. The Brennan Center for Justice is tracking what states are working on when it comes to voting restrictions. You can catch up on the latest with their May 2021 roundup.

Voter restriction bills that lawmakers are pushing for around the country could make it harder for millions of Americans to fulfill their basic democratic right to vote. While voter suppression tactics are nothing new, many legislatures are looking to tighten the rules around how you cast your ballot. And one of the best ways to make sure your voice is heard is by voting and staying informed, not only on the federal level but in your local and state elections as well.