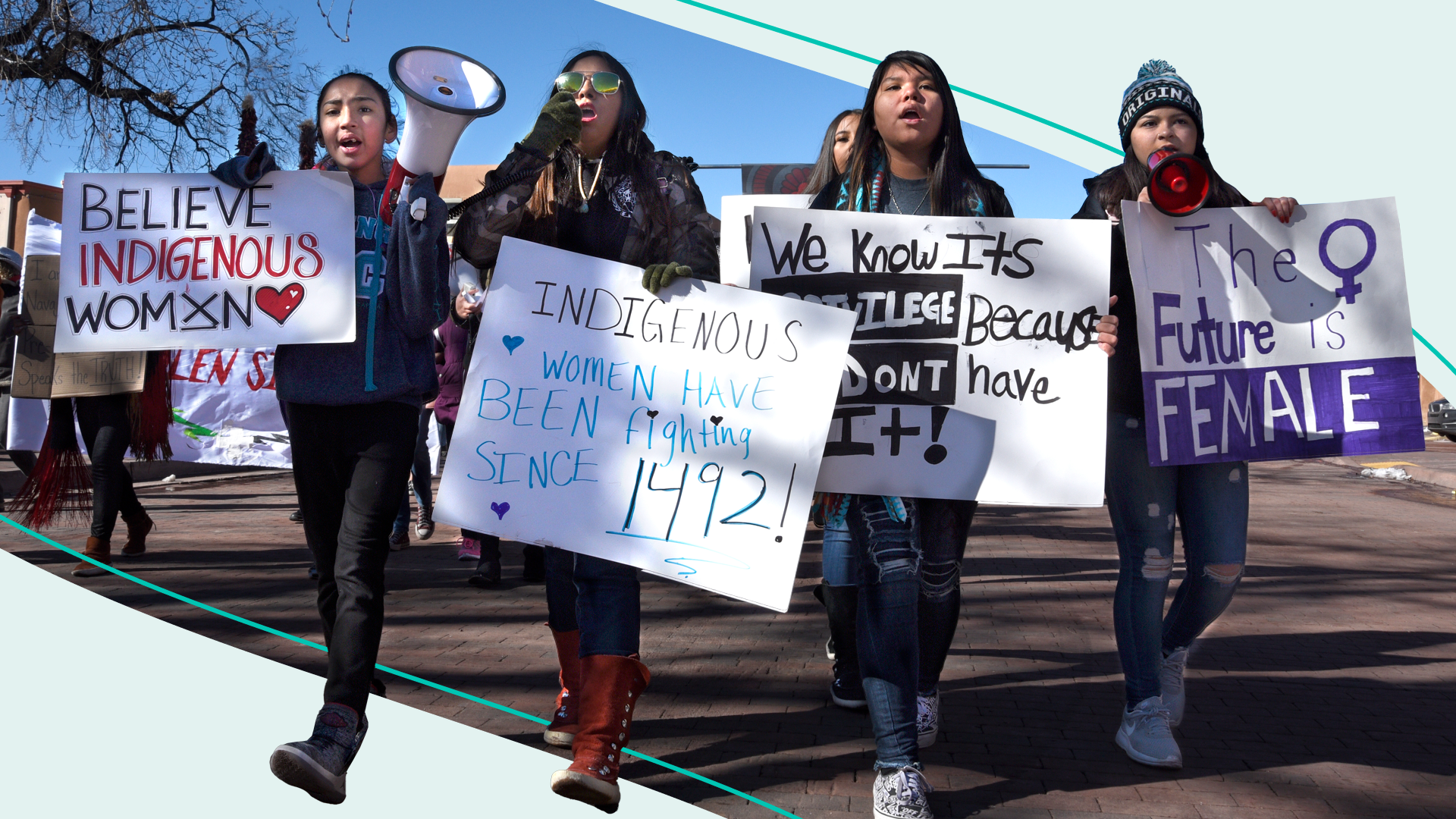 In the past decade, 710 Indigenous people – mostly women and girls – have gone missing in Wyoming. And while Indigenous people make up just 3% of the state’s population, they account for 21% of the homicide victims. And that’s just one state. This problem has been going on for decades and decades across the US. But not everyone is aware of that. And for those who are, little is being done.

You may be wondering why we're focusing on Wyoming. That's where Gabby Petito – a 22-year-old white woman from New York – went missing in September. Her case came into the spotlight after she disappeared from a cross-country road trip with her fiancé. Her case sent social media into a frenzy: her name was trending across platforms, and videos with #GabbyPetito garnered more than 1.3 billion views on TikTok alone. Authorities later found her remains in Wyoming.

While people around the country are mourning her death, many are also asking ‘where’s this support for the Indigenous community?’ In honor of Indigenous People’s Day, we’re looking at the discrepancies with missing and murdered Indigenous women and girls (MMIWG), how the media plays a role, and what can be done to help fix this.

The Statistics Are Stacked Against The Indigenous Community

The stats around MMIWG are staggering. Take Montana, for example. Aka one of the states with the highest number of Native Americans per capita. About 6.6% of the population is Indigenous. But a disproportionate number of people reported missing throughout the state are Indigenous. The state’s Department of Justice found that they are four times more likely to go missing than white Montanans.

But, like the stats from Wyoming, that’s only one small piece of the alarming puzzle. The case of MMIWG is a national crisis. Let’s look at some of the nationwide data…

While these numbers are high compared to women of other ethnicities and races, there’s still likely an undercount in this data. Example: the Urban Indian Health Institute (UIHI) found that over 5,700 Indigenous women and girls went missing across the country in 2016. But only 116 cases were logged in the Department of Justice’s database that same year. There are a few reasons for potential undercounts. Like…

Decades of systemic racism within law enforcement have persisted, leading to racial profiling and over-policing against minority communities – including Indigenous people. And Native Americans are often a forgotten group when it comes to the discussion around police: CDC data shows they also face high rates of police brutality.

This has led to a distrust in law enforcement, causing some people to fail to report certain cases to the police. For cases that are reported, UIHI Director Abigail Echo-Hawk told PBS that her org found that some databases would default a victim’s race to white if an ethnicity was not collected – and officials sometimes determine someone's race or ethnicity just by looking at them. Meaning, victims are often misclassified as white or Hispanic.

A Broken System on Tribal Lands

Another issue? It can be difficult to prosecute suspects in many of these cases. For Indigenous people who are accused of committing crimes, a tribal officer can make the arrest...but the case still has to go through the federal court system. Plus, back in 1978, the Supreme Court blocked tribal courts from being able to prosecute non-Native Americans who work or live on reservations if they commit crimes. And for US attorneys who could press charges, they reportedly decline to do so in a majority of cases. (The law changed in 2014 so some non-Native defendants can be prosecuted in domestic abuse cases.)

Data has shown that reservations often face 2.5 times higher violent crime rates than other parts of the country. But these roadblocks may make victims or their loved ones reluctant to reach out to law enforcement because they may not feel that they can punish perpetrators and get justice.

One study found that the real driver behind whose story is and isn’t covered is actually the police. Because they are often the ones who give info to reporters. Which could be why there’s a…

Data shows that only 18% of Indigenous female homicide victims in Wyoming received media coverage, compared to 51% of white victims there. And when these cases did make their way into the news, articles were more likely to include violent or negative language compared to those about white victims. Echo-Hawk told CNN that these women are blamed for their own cases – leading to a lack of empathy and assumptions.

A phrase that’s been popping up on social media in the aftermath of Petito’s case is ‘missing white woman syndrome.’ Late PBS anchor Gwen Ifill coined the term back in 2004. And it’s been used to describe the major disparities in media coverage when it comes to the stories of young, missing women of color.

Here’s a brief snapshot into the stories of some of the missing and murdered Indigenous women and girls in recent years...

What’s Being Done to Help Protect Indigenous Women and Girls

While the stories of some MMIWG make their way into the news, it’s still an uphill battle for them to get the appropriate coverage they deserve. And to get accurate data about these victims. But there’s some work being done to help protect them.

In Oct 2020, then-President Trump signed a bill called Savanna’s Act. It’s named after Savanna Greywind, a 22-year-old Spirit Lake tribal member from North Dakota who was killed in 2017. The law is meant to help police track, solve, and prevent crimes against Native Americans. And requires the DOJ to work with tribes and develop law enforcement guidelines.

A few months later under the Biden admin, Interior Secretary Deb Haaland – the first Native American cabinet member in US history – created the Missing & Murdered Unit for Indigenous people. The goal of the unit is to “put the full weight” of the federal gov into investigating these cases. Think: provide resources and develop partnerships with the FBI. The unit will expand on Operation Lady Justice – a task force launched in 2019 that works to solve these cases.

Meanwhile, a number of states have created task forces to specifically address the issue of MMIWG, including Washington, Minnesota, and Wisconsin. Many say their goal is to help fight the abduction, homicide, violence, and trafficking of Indigenous women. But it’s not yet clear if their work is yielding any results.

If you’re interested in learning more about the data around and stories of MMIWG, here are some resources to check out:

Indigenous women and girls have been harmed and exploited for hundreds of years. And it’s time for that to change. But this isn’t a problem singular to one state – and it even goes beyond the US’s borders (think: Canada and Australia). Now, the onus is on governments, law enforcement, and the media to step up – and for individuals to demand change and share these important stories.