Global organizations and abbreviations to know 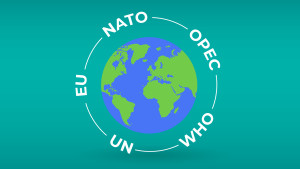 We all love a good abbreviation: BTW, OG, NBD. That doesn't change when countries get involved. Here are some of the global organizations that you only know by their abbreviations. And a refresher on WTF they do (see what we did there?).

We can’t list them all. Because time. But here are the ones you hear a lot about…

EU...European Union. Aka the cool kids on the European bloc. Made up of 28 countries, with everyone from France and Germany to Malta and Luxembourg. The EU became a thing post-World War II. The main goals: stabilize the bloc’s economies (hey, Euro currency) and make sure countries are saying ‘make love, not war.’ The EU even won the Nobel Peace Prize in 2012. Here’s a part of the EU you also hear about…

G7...Group of Seven. Made up of seven democratic, rich, and industrialized countries. Say hiiii to the US, Canada, France, Germany, Italy, Japan, and the UK. The group started in the ‘70s and later became the G8 after inviting Russia to join the club in the late ‘90s. Except it got the boot in 2014 after it annexed Crimea (a big no-no in the international community). The group holds a summit once a year to talk geopolitics (think: international security, world economies, and the like).

G20...Group of 20. A less exclusive version of the G7. The gang makes up about 85% of global economic output and two-thirds of the world’s population. The G20 got together for the first time in the late ‘90s. And once a year, they have a get-together to talk about ways to make the global economy and financial regulation stronger. They also come up with global policies.

IAEA...International Atomic Energy Agency. The group that tries to get leaders like North Korea’s Kim Jong Un to drop its nukes. President Eisenhower came up with the idea in the ‘50s after World War II and it currently has 171 member states. It promotes using nuclear energy in a safe and peaceful way (read: not for nuclear warfare, but for things like making electricity). It’s a related organization with a cooperation agreement with the UN. The group won a Nobel Peace Prize in 2005.

ICC...International Criminal Court. Located in The Hague, Netherlands (yes, a real place). The court oversees cases on genocides, war crimes, and crimes against humanity around the world. One example: the ICC found Congolese warlord Thomas Lubanga guilty of abducting children and using them as soldiers. Think of this court as a last resort. Meaning if another court or country won’t or isn’t able to prosecute, the case can go to the ICC. And it’s focused on giving people fair trials.

IMF...International Monetary Fund. It’s been around since the ‘40s and was created to help countries keep currency values on the up and up. And avoid another Great Depression. Almost every country in the world is in on the fun(d). It’s a specialized agency within the UN – meaning it has its own legislative and executive body, as well as its own budget.

NATO...North Atlantic Treaty Organization. Made up of 29 mostly European countries, plus the US and Canada. The group got together at the start of the Cold War to stand up against threats from the Soviet Union. Today, the member countries work together on security and defense.

NAFTA...North American Free Trade Agreement. The deal was signed back in the ‘90s to open up trade between the three neighbors. It gets rid of a lot of tariffs on imports and makes it easier for companies to do biz across the borders. After President Trump threatened to pull the US out of the deal, the three countries re-negotiated it. Now, it’s called USMCA, or the US-Mexico-Canada Agreement. We know, doesn’t exactly roll off the tongue in the same way.

OPEC...Organization of Petroleum Exporting Countries. The group that’s feeling gassy. It’s made up of 14 countries from the Middle East, Africa, and South America that produce 40% of the world’s crude oil. OPEC members focus on keeping oil prices stable and their oil-dependent economies happy by working together on things like how much oil they should produce at once. When you see gas prices going up, you can usually blame OPEC. When you see gas prices going down, you can usually thank OPEC.

TPP...Trans-Pacific Partnership. Kinda like NAFTA, but newer and with more countries. It’s a trade agreement between some countries along the Pacific Rim, from Malaysia to Canada to Peru. The deal became official in 2016. The US was part of the OG squad as a way to get cozy with Pacific Rim economies. But the Trump admin said the deal was bad for US jobs, and pulled the country out in 2017. Now the group goes by TPP 11 (or CPTPP if you’re really feeling up for it). It gets rid of most tariffs between the member countries, among a lot of other things.

UN...United Nations. It became a thing after World War II to make the world a more peaceful and safer place. It provides humanitarian aid, protects human rights, and works on initiatives like fighting climate change. It’s got a bunch of smaller divisions within it. Like…

WHO...World Health Organization. It’s technically part of the UN. And works with pretty much every country in the world – plus other international orgs, foundations, and research groups – to make sure people are living a healthy life. Think: making sure people have clean air and water, and helping people fight off diseases like Ebola, HIV, and cancer by giving them access to vaccines and other meds.

WTO...World Trade Organization. Spoiler: it’s the world’s trading organization. Job responsibilities include making sure there’s open trade around the globe, acting as a safe place for countries to talk trade deals, and playing middle man for any disputes. Psst...trade doesn’t only include goods. It can also include services and intellectual property.

All these letters can get confusing. But each abbreviation is a BFD when it comes to everything from making sure economies are lookin’ good to keeping nuclear weapons on the DL.