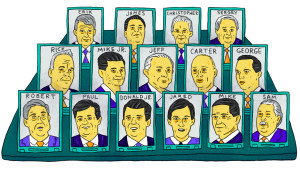 You've been hearing a lot about Russia and the Trump campaign and the US presidential election.

Yes, what the eff is going on?

Last year, the US intelligence community raised its hand and said Russia interfered in the election. And it did this in part to help Donald Trump win.

The FBI and CIA say that Russia did things like hack the DNC network and the Clinton campaign's emails. They then allegedly turned around and released the stolen docs to WikiLeaks, which released them to the press in slow drips. Russia also created armies of social media bots to spread fake news. But there is zero evidence that Russia manipulated voting machines on election day.

Tell me more about those investigations.

The FBI started looking into all this last summer. House and Senate Intelligence Committees have also been conducting their own investigations. And now there's a special counsel on the case. It’s going to take a looooong time before there are any real answers. Hint: years.

So who do I need to know?

Here are all the people at the center of this controversy...

Former Trump campaign manager. You know him as the guy who was charged with 12 counts

Manafort's former business associate and former deputy campaign manager for President Trump. You know him as the one sharing the same fate

as Manafort. Gates was also indicted on charges like conspiracy against the US and money laundering. He worked with Manafort to promote a pro-Russia political party

Former foreign policy adviser for President Trump’s campaign. You know him as the one who tried to set up a meeting

with Russian officials who claimed to have “dirt” on Hillary Clinton. And was charged with lying to the FBI about it. He pleaded guilty and seems to be cooperating

Former national security adviser and retired three-star Army general. You know him as the one who was forced to step down

Michael Flynn’s son and chief of staff. You know him as the one who spread fake news like ‘Pizzagate’

while working for the Trump transition team. And then got fired for it. The FBI is reportedly looking into his work at his dad’s lobbying firm

Attorney General. You know him as the guy who, when asked during his confirmation hearings whether he met with the Russian ambassador Sergey Kislyak, didn’t mention that he had.

Senior adviser to President Trump, and his son-in-law. You know him as the guy who also met with Russian ambassador Sergey Kislyak. And whose family business dealings

have raised eyebrows about potential conflicts of interest while he’s in the White House. He also once got a bag of dirt

Former campaign adviser to President Trump. He also lived and worked in the energy sector in Moscow for three years. You know him as the guy that the FBI has had a warrant

Ex-s enior White House adviser and former Trump campaign national co-chairman. You know him as the guy who knew George Papadopoulos was trying to collect promised "dirt" on Hillary Clinton. And OK’d his request to meet up with the Russians promising the dirt, though that meeting didn't end up happening

Founder of private security firm Blackwater and Education Secretary Betsy DeVos's brother. You know him as the guy who apparently had a non-honeymoon meeting in the Seychelles

Former FBI director. You know him as the guy whose bureau was investigating both presidential candidates last year. He got criticism for giving public updates

Former Russian ambassador to the US. You know him as the guy whose calendar invites

Former British spy. You know him as the man behind that dossier

to write the document. It includes claims about ties between the Trump campaign and Russia...and golden showers. Mueller reportedly interviewed Steele

What exactly happened and when?

It comes out that Hillary Clinton used a personal email account

is paid to give a speech

at a gala for a Russian gov-backed TV network in Moscow. He also sits next to Russian President Putin at the dinner. He says the event was a “great learning opportunity.”

– the guy who was once paid to promote Russian interests in the US – joins Trump’s campaign team.

After a loooonnnnng investigation into whether Clinton mishandled classified info while using a private email server as sec of state, FBI Director James Comey

says he will not recommend charges

Around the same time, the FBI starts looking into

, who is now on Trump's campaign team and who the FBI is investigating for potentially being a Russian spy (more on that later), gives a speech in Moscow

The Republican National Convention aka the GOP's Coachella kicks off in Cleveland. Kislyak

, the Russian ambassador to the US, makes a cameo appearance. And meets with a few Trump campaign officials

But during this convention, Team Trump convinces the GOP to roll back its policies toward helping Ukraine

are found in Ukraine, showing Manafort

was paid by the pro-Russian Ukrainian political party that ended up winning the presidential election there. It’s unclear if the docs are legit and if Manafort actually received that money. Investigators in Ukraine say the docs are part of their investigation into the party's illegal activities. A few days later, Manafort resigns

at his office on Capitol Hill.

Less than two weeks to go until Election Day, Comey

decides to send Congress a postcard

there's a thing called the Hatch Act, which means no federal agents can directly support one presidential candidate over the other. Then-Senate Minority Leader Harry Reid (D-NV) – and many other lawmakers – called out Comey

for drawing new attention to Clinton's emails, while not releasing info on Trump's alleged ties to Russia.

get together at Trump Tower in NYC.

Both the CIA and FBI raise their hands to say publicly for the first time that Russia meddled with the election in part to put Trump in the White House.

On the same day, Flynn

. He allegedly tells Kislyak ‘don’t worry about those sanctions’

, founder of private security firm Blackwater, jets off to the Seychelles

was just to schedule a phone call

to say that he asked Flynn

, who at this point is the nominee for Attorney General, gets grilled at his confirmation hearing

is misleading them about his calls with Kislyak

Unnamed US officials say 'guess what? Flynn spoke about sanctions against Russia

in that phone call with Kislyak

hands in his two week's notice

for misleading the White House about his phone call with Kislyak

Trump has a private meeting with Comey

. He apparently asks Comey to drop the FBI's investigation into Flynn's

' past meetings with the Russian ambassador are made public.

during the election. He gives no evidence to back up this claim. This will later come into play when Rep. Devin Nunes

testifies before Congress. He confirms that the FBI has been investigating

, the guy in charge of the House’s investigation into whether Team Trump colluded with Russia, takes a surprise Uber trip

picked up conversations involving members of the Trump transition team. This was during routine surveillance of foreigners. He shared this information with the press before sharing it with the rest of his committee. Trump says he feels “somewhat” vindicated

makes a comeback. He says he’s willing to testify

On the same day, it comes out that Nunes

It's made public that the FBI’s been keeping an eye on Trump's former campaign adviser, Carter Page

Remember those docs connected to Manafort

? Psst...the one that shows he might've been paid millions for work with a pro-Russian political party. The AP reports

retired in 2014, he went on to work with the Russian and Turkish governments, accepting hundreds of thousands of dollars in payments.

These biz deals were previously reported. But it turns out, that work was not OK'd by the US military. So now the Pentagon is investigating

, saying he damaged the FBI's reputation by mishandling the investigation into Hillary Clinton's emails. He says the decision is based on recommendations from Attorney General Jeff Sessions

and the deputy attorney general. Supporters say Comey had lost trust within the bureau. Since Comey was also leading the FBI's Trump-Russia probe, critics compared his firing to that time President Nixon fired

wrote about his private meeting with Trump? The one where Trump asked Comey to drop the FBI's investigation into Flynn's

It comes out that Kushner

is now a focus

in the FBI's Russia investigation. He hasn't been accused of any wrongdoing, but the feds are especially interested in meetings he had last year with Kislyak

Let's go back to December. Remember that meeting between Kushner

testifies to the Senate

about those memos. He says that he wrote these memos because he worried Trump "might lie" about their convos. That he asked a friend to leak the contents of the memo about Flynn

caught up with a Russian lawyer at Trump Tower? Word of that meeting comes out. It was set up so that the Russian gov could give the Trump campaign some info on Hillary, as part of its "support for Mr. Trump." Kushner

were also there. We know this because Donnie posted the entire email exchange

At first, Don Jr. says the meeting was about a US-Russia adoption program

. Then... never mind. Team Trump says meetings like this during a presidential campaign are normal. Critics say 'not so' and that it's potentially illegal

against Russia for interfering in the election. They include an asterisk that says the president can't get rid of or dial down any of these sanctions without getting an OK from lawmakers first. Both the House and the Senate warned Trump that if he vetoed the bill, they would override him. So Trump signed on the dotted line. Moscow says the sanctions are 'nyet cool' and forced the US to cut hundreds of diplomatic staff in Russia as a response. Then in a diplomatic tit-for-tat