Everything You Need to Know About Abortion 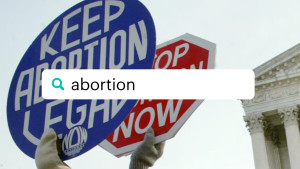 More abortion restrictions have been enacted across the country in 2021 than in any previous year. It’s a heated topic on the Hill and at home. Here’s what you need to know.

It’s a procedure to end pregnancy. The word was first used in the 1500s, but abortion has been a thing since ancient times. In early America, abortions were legal until a mother felt “quickening” (a subjective term that describes the fetus moving, usually around 4 months). It wasn’t until the mid-1800s that some states started regulating it.

How common is it?

Accounts from the early 1900s indicate that abortions were “not an unusual feature” of married life. In 1973, the Supreme Court recognized a woman’s qualified right to have an abortion (see: Roe v Wade). The U.S. abortion rate today is actually lower than it was in 1973 — dropping about 20% between 2011 and 2017 (the latest data available). But they are still common: The Guttmacher Institute estimates that about one in four women in America will have an abortion by age 45.

It’s the landmark Supreme Court ruling from 1973. A Texas woman named Norma McCorvey (known as Jane Roe in later court documents) wanted an abortion. But Texas law only allowed abortion if the mother’s life was at risk. So, in 1970, McCorvey sued the Dallas County district attorney, Henry Wade. The case made it all the way to the Supreme Court, which ruled 7-2 that the constitutional right to privacy protects a woman’s right to an abortion. But the ruling still left room for states to regulate abortions.

What about Planned Parenthood v Casey?

Following Roe v Wade, Pennsylvania passed a law that created hurdles for women to get an abortion, without outright banning it. Think: requiring women to give “informed consent” before a procedure and imposing a 24-hour waiting period. Planned Parenthood of Southeastern PA sued the state, arguing the law went against the constitutional rights guaranteed by the Roe v Wade precedent. The justices reiterated the Roe v Wade ruling – that women have a right to an abortion – but also said that states can regulate abortions to protect the mother and fetus as long as those regulations didn’t create an “undue burden.”

What’s going on with the abortion law in Texas?

This year, Texas Gov. Greg Abbott (R) signed one of the country’s most restrictive anti-abortion bills into law. And so far, the U.S. Supreme Court has left the abortion law in place (more on that here). It…

And what about Mississippi’s abortion law?

The law (passed in 2018) bans most abortions after 15 weeks. Lower courts had ruled against it. But it’s back in the news again after the Supreme Court picked up a case between the state and its only abortion clinic — Jackson Women's Health Organization. Now, after hearing arguments over the law, it seems like the conservative-majority justices might be on the verge of siding with Mississippi. Which means they could roll back, if not overturn, the decades-old legal precedent set by Roe v. Wade: the constitutional right to an abortion. Overturning the landmark ruling would put abortion policy in the hands of states (where it’d become illegal or heavily restricted in about half of the country). A decision isn’t expected until June.

What other states are considering new abortion bills?

This year, more than 561 abortion restrictions had been introduced around the country. And as of early October, at least 106 have already been enacted. You can find the Guttmacher Institute’s list of abortion laws for each state and DC here.

PS: We Skimm’d more about the legal battles around abortion in the US here.

The Physical and Mental Considerations...

How long does it take to know that you’re pregnant?

There’s a difference between being pregnant and knowing you’re pregnant. If you're not trying to have a baby, you'll likely miss a period before you pee on a stick. Best-case scenario, that’s about four weeks pregnant when you get a positive test result. For someone with an irregular period, it could take much more than six weeks before knowing what’s going on.

Reports have shown that medical abortions today are safe, with only rare complications. And to clear this up: There’s no evidence that a patient is more likely to develop breast cancer afterward.

Can you get pregnant after an abortion?

Yes. Abortions typically don’t impact fertility or the ability to have a healthy pregnancy in the future. So someone could feasibly get pregnant just a few weeks or months after an abortion.

What does it cost?

Coverage depends on the insurance plan and where it’s done. Policies like the Hyde Amendment have limited federal funds for abortion. But California, New York, Maine, Illinois, Oregon, and Washington all include abortion coverage in ACA and Medicaid. Other states (see a map with access info here) only cover it if certain criteria is met (for example, if the pregnant person’s life is in danger). Out of pocket, an abortion could cost up to $3,000 or more, with $500 being about average. In many cases, cash for a legal abortion can come from an HSA or a FSA.

How does a surgical abortion work?

There are two common types, depending on how far along the pregnancy is.

What are abortion pills?

They end a pregnancy before the 9th or 10th week. (Whereas the morning-after pill works to stop or delay ovulation to prevent a pregnancy from happening at all.) There are usually two pills, and they can be taken at a clinic, doctor’s office, or at home.

What happens after an abortion?

Abortion is not just a topic up for debate. It's a discussion about who has the power to decide what happens after someone gets pregnant: the government or the pregnant person.