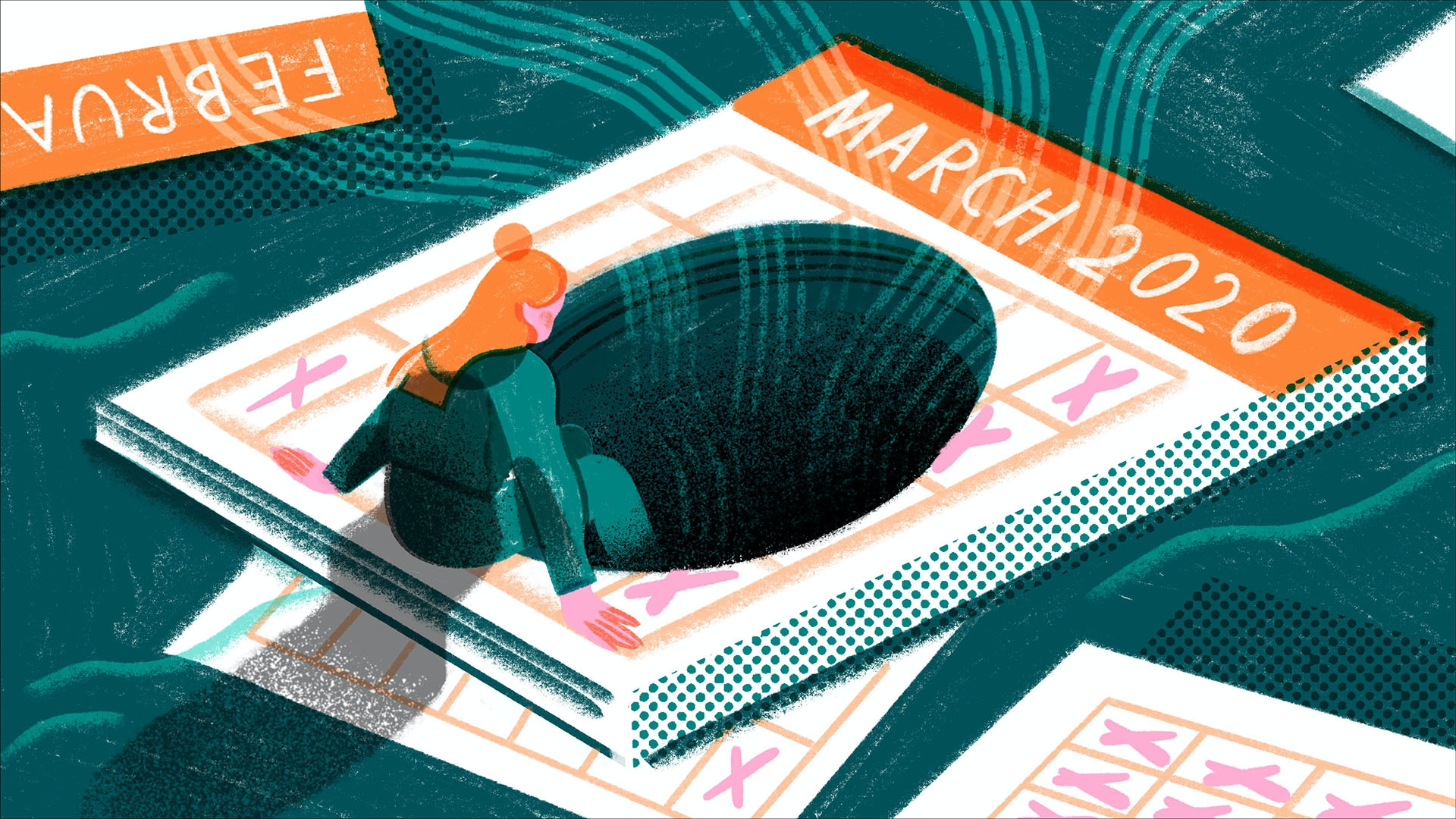 It’s been two years since the World Health Organization officially declared COVID-19 a pandemic. In that time, many of us have experienced profound and unprecedented kinds of loss. But without much direction on how to mourn.

We asked Skimm’rs about what they’ve been grieving most since the pandemic changed all aspects of life. And they had a lot to say. Some opened up about losing loved ones to the disease that’s caused 6 million deaths globally. Others talked about once-in-a-lifetime events that they had to cancel or postpone. People posted about becoming parents for the first time, but having to go through pregnancy, delivery, and early childcare without close family around. And a few shared their experiences of infertility, miscarriage, and giving birth to stillborn babies —  already-isolating events that can feel even lonelier in lockdown.

We took these responses to grief experts to get some advice for coping with losses of all shapes. You'll hear from:

What’s the first step to dealing with a loss that happened during the pandemic?

That can mean acknowledging the death of a family member. Or it can mean recognizing what Dr. Lott calls “disenfranchised losses,” aka losses that society typically doesn't deem “worthy” of mourning over. Like your scrapped plans for a dream wedding, the graduation cap you didn’t throw, or the time as a new parent that you didn’t get to share with your immediate family.

Even as someone else experiences an awful tragedy, your loss is valid.

“It’s important to honor the things that matter to you. And it’s not helpful to compare loss or trauma with other people,” says Ossefort-Russell, whose blog focuses on dealing with grief during the pandemic.

Accepting your grief, she says, helps your brain make sense of what’s happening with your body. Because here’s the thing: Your body’s going to feel the pain of loss, whether you acknowledge that you’re grieving or not.

“One of the things that we know from neuroscience is that emotions emerge in the body,” Ossefort-Russell says. So if you say to yourself: 'No, I shouldn’t be upset about this,' then instead of putting yourself in a position where your body can grieve and release your emotions, she says you’ll be stuck in a “knotted-up, negative experience” where your pain’s “not going to move.”

How do I effectively grieve a pandemic loss?

Once you’ve identified your loss, your next step is to understand exactly how you feel about it, since grief can manifest in a number of ways, Ossefort-Russell says. Figure out if this loss is causing you to feel emotions like anger or sadness. Journaling or spending a few minutes a day walking or meditating can help you put a name to your feelings, and figure out what to do with them.

For example, if you’re dealing with the loss of a milestone event, you might think of that as the loss of a dream. And that could lead to a feeling of profound sadness.

“That’s a very specific kind of ache that’s different from the loss of a person, but it’s a real loss,” Ossefort-Russell says.

Or, your grief could feel more like anger. Not at anyone in particular. But maybe it’s just how you felt about having to deliver a baby without the support of your family.

“Anger may seem like it makes no sense because, especially in the pandemic, [your loss] isn’t really anyone’s fault,” Ossefort-Russell says. “But your anger is probably more about protest.”

Instead of judging yourself for having certain emotions, “give yourself permission to feel what you feel with compassion,” Ossefort-Russell says. Because when you identify a painful emotion, she says the amygdala (your brain’s emotional center) “actually relaxes.” On the contrary, if someone tries to talk you out of feeling the grief, she says that the amygdala “stays inflamed,” and the brain continues to release stress hormones like cortisol.

How can I start to feel better about my loss?

Try to do something constructive with those difficult feelings.

“Emotions have adaptive actions that go in them,” says Ossefort-Russell. Think about the stress you can feel before a work deadline: that can kick you into high gear and make you more productive. Grief-related emotions can also encourage your body to do useful things.

Sadness, for example, can get you to take it easy, sleep in, and heal. Anger might push you out in the world to do something physical as a way to release, she says.

“When I had a big loss, I ran a lot,” Ossefort-Russell says. “I would intentionally let my anger pound the earth with every footstep.”

So find the activity that accesses grief-related emotions for you. Dr. Lott often suggests yoga, meditation, qigong, or all of the above.

And if you need to take a break from your grief, seek out an enjoyable distraction, Ossefort-Russell says. “I want to give people permission to do that also.” Because intentional breaks — maybe in the form of movies, bubble baths, or dinners with friends where you don’t talk about loss — can also be beneficial, she says.

Something else that should help: talking to someone who will validate your feelings and tell you, ‘This sucks,’ without trying to fix or mitigate a problem. “That can be very healing to have somebody acknowledge that,” Ossefort-Russell says.

What if my grief lasts a long time?

That’s understandable. This is hard.

Keep in mind: “grieving the loss of a loved one can take way more than a year,” says Ossefort-Russell. And that was even the case before the pandemic, she says.

Over the last two years, Dr. Lott adds, “we've had a lot more grief and less availability for the rituals that we have to help us to move into the grief process.”

One example: Zoom funerals. They really don’t compare to mourning the loss of a loved one by connecting with people IRL. That’s because “there’s so much information that’s conveyed nonverbally, body to body,” says Ossefort-Russell. “When all we can see is somebody’s face, we don’t have that sense of the actual physiological connection that we feel in another person’s presence.” And there’s also the absence of physical hugs.

But hugs might not be enough. If you’re having a really hard time with grief for an extensive period, it could be time to consider connecting with a licensed therapist or psychologist. Particularly one who specializes in prolonged grief disorder, Dr. Lott says, because “most therapists are not trained in grief.” And she says that helping someone with long-term grief can look different than helping someone with acute grief.

Note: Some therapists prefer to avoid using the word “disorder” in connection with grief. Since grief is not an illness. But the long-debated condition was recently added to the American Psychiatric Association’s DSM-5, the manual for diagnosing mental illnesses. And is defined in adults as experiencing at least a year of intense longing and preoccupation over a loved one who’s died — so much that it impairs someone’s ability to carry out daily activities. Dr. Lott says that the term ‘disorder’ is “not an attempt to pathologize grief,” but to name a condition that causes significant suffering, and “for which there is an evidence-based transformational treatment available.”

Even if your loss is relatively recent, therapy might be a good option. It could help you find out if your grief is “coming into contact with something from your history,” says Ossefort-Russell. In other words, it can help you sort through any unnamed issue that interferes with the way you process grief.

The last two years have dealt us all kinds of loss. And all of them are legitimate, regardless of scope. If you’re grieving, try to acknowledge your grief, release your feelings in a way that makes sense to you and your body, and seek support from the personal connections you have. If you think you need additional support, it might be time to seek professional help.

Updated on March 21 to reflect the inclusion of prolonged grief disorder in the DSM-5.