What To Know About Fat Stigma, BMI, and Diet Culture 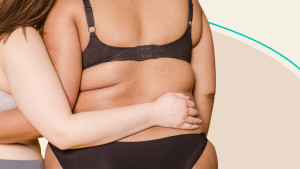 "Fat" is not a bad word. Yep, you can read that again. But it’s time we talk about fatness and fat stigma.

Anti-fat bias or weight stigma (stereotyping based on body size) has become a clear public health problem. Studies show that fat people are often mistreated by strangers, as well as family, friends, and doctors, who could fail to screen them for certain cancers or overlook certain diagnoses. That’s all despite the fact that being “overweight” (we put that in quotes for a reason, which we'll get into later) doesn’t necessarily mean you're unhealthy. What’s worse: Data shows that weight stigma damages mental health and, in fact, is harmful to physical health, too.

Well, we’ve been here for a while. Sure, fuller bodies were the subjects of statues thousands of years ago. But the corset has been holding in waists for hundreds of years. Even in the early 20th century, only curves with tiny waists were prized — and that was decades before the Kardashians. The Western idealized body type has gotten smaller and smaller ever since (and is typically white...more on that in this book). Enter: the fat liberation or “fat acceptance” movement, which emerged alongside other liberation movements of the ‘60s and ‘70s as a way to celebrate big bodies and fight against weight stigma. (It would take decades before medical journals would quantify just how dangerous weight stigma is.) Today, many activists use the word “fat” to reclaim it as a neutral adjective to describe body size, and to push back against fatphobia (another word for anti-fat bias or weight stigma).

Learn about weight stigma, and understand the real meanings of relevant terms. And also confront the ways society has shaped how you think about bodies.

People with fat bodies have historically been stigmatized in the US, even though studies show that weight is not necessarily a measurement of health. That’s a problem. A way to be a part of the solution: Listen and learn from fat activists, acknowledge that thin privilege is real, and know that accepting your body at any size can take time — people have been reckoning with it for centuries.