Plan B is in Demand After Roe’s Reversal: A Guide To Emergency Contraception 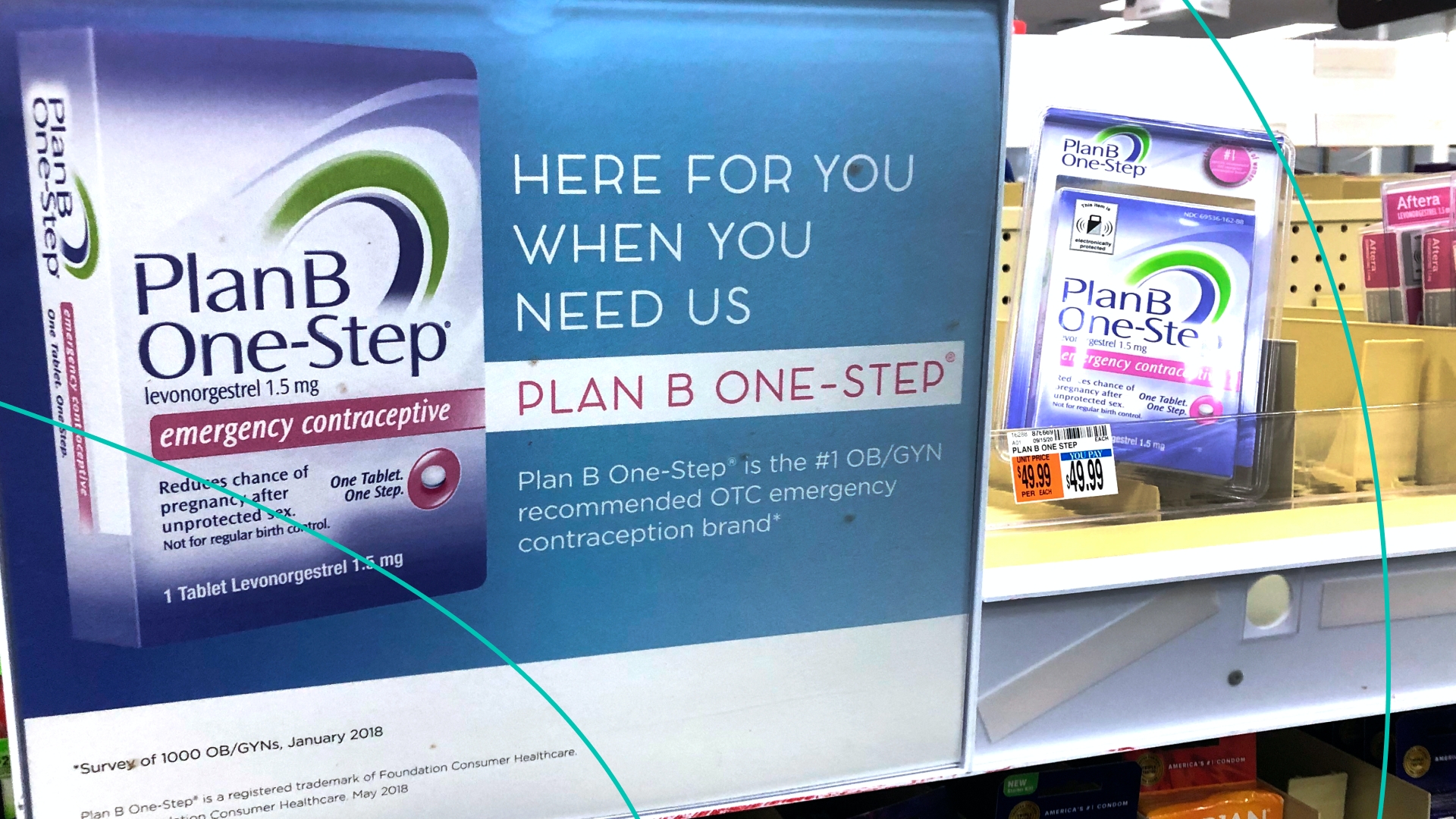 It’s known as the “morning-after pill,” but right now many women are seeking out emergency contraception (EC) even before having unprotected sex. The focus on EC — like Plan B — comes in the wake of SCOTUS' landmark abortion decision in June. The majority opinion determined that abortion is no longer protected under the constitution. And Justice Clarence Thomas hinted in his concurring opinion that a woman's right to contraception could also come into question soon.

The ruling has led to a spike in demand for EC pills. CVS, Rite Aid, and Amazon limited purchases of Plan B to three per customer earlier this week. (CVS has since dropped the purchasing limit.) And Walmart limited its online orders.

Not trying to scare you. At this point, emergency contraception is still widely accessible. But you might have questions.

Among them: What are the different kinds of EC? And should I store any in my medicine cabinet now, before I need it?

We called up Dr. Amy Addante, a board-certified OB-GYN with expertise in complex family planning, to help Skimm EC.

What is emergency contraception?

Something your doctor might also refer to as “postcoital contraception.” EC is for right after — or a couple of days after — unprotected sex. It’s a backup option if your regular contraceptive method failed or if you didn’t have one in place. Hence the popular brand name: Plan B.

Would you recommend getting the morning-after pill before it’s needed?

“I don't think it's a bad idea to have emergency contraception in your medicine cabinet,” Dr. Addante said. Her recommendation: keeping at least one dose on hand and then replacing it after using it. That’s something to consider especially if you’d use a prescription morning-after pill (like Ella). Because that requires planning. And “you never know when you're going to have a [contraceptive] method failure,” Dr. Addante said.

Would you recommend stocking up on the abortion pill?

“I don’t have a great answer about keeping those stocked,” she said. Mostly because abortion laws are quickly evolving. And she doesn’t want to tell someone to obtain a medication abortion in a state where it could be illegal.

Now for a quick refresher on the abortion pill. That term is typically used to describe the two pills — often mifepristone and then misoprostol — used in a medication abortion. Mifespristone blocks the hormone progesterone that is needed to support a pregnancy. And misoprostol “causes the uterus to cramp and contract to help you pass the pregnancy,” said Dr. Addante.

Keep in mind: Morning-after pills (like Plan B) are different from abortion pills. Plan B doesn’t disrupt an existing pregnancy. Instead, it blocks ovulation (the release of an egg) so that the pregnancy has a lower chance of happening in the first place.

What are the different types of emergency contraception?

There are pills and IUDs (intrauterine devices). And they’re all largely considered safe. Let’s break them down.

Levonorgestrel, aka Plan B

Levonorgestrel is a progestin, which is a class of synthetic hormones commonly used in contraception methods like the pill. It works by stopping ovulation. Meaning, an egg isn’t released right away, so it has a lower chance of uniting with sperm. Aka fertilizing. Reminder: Sperm can live in the reproductive tract for up to about five days (And note: If you’ve already started ovulating before taking Plan B, it probably can’t help you.)

Someone who’s had unprotected sex, and is under around 155 pounds. Because studies suggest that Plan B might be less effective for women above that weight. Thing to know: Levonorgestrel is up to 89% effective at preventing pregnancy if used within three days after unprotected sex — which is the recommended time frame. Although it’s most effective the sooner you take it.

You can typically get it at your local drug store. Look “in the aisle with things like pregnancy tests and condoms,” Dr. Addante said. Sometimes, it’s kept behind the pharmacy counter. But note: You don’t need a prescription to get Plan B.

Plan B can cost about $50 without insurance, but a generic version could be cheaper: about $11. Dr. Addante said you can get levonorgestrel in drug stores and online by “cutesy names” other than Plan B (think: Restart, My Choice, Take Action). The EC can come as one or two pills. Just make sure it has the standard 1.5 total milligrams of levonorgestrel.

Ulipristal acetate works similarly to levonorgestrel. It prevents ovulation and thins the lining of the uterus (so an egg doesn’t implant there). Thing to know: Using hormonal contraceptives and Ella (a common ulipristal brand) simultaneously might lower the effectiveness of both. So if you need to use Ella and are already on hormonal contraception — maybe you missed a dose — doctors recommend you stop your hormonal contraception for about five days. And when having sex, use a barrier contraception method.

Ella is most effective for those weighing up to around 195 pounds. And like Plan B, it works better the sooner it’s used after unprotected sex. But it can be used further out than Plan B. Read: It’s about 98% effective when taken within five days of unprotected sex.

Ella requires a prescription, which you can get from your doctor, “or anywhere that has reproductive health as a part of care,” Dr. Addante said. She warned that not every pharmacy keeps Ella stocked, but clinics like Planned Parenthood typically do. As for price, Ella might be covered by your insurance. Or it could cost you around $50. Thing to know: Dr. Addante said that the shelf life of both Plan B and Ella is about four years (and the individual dose should have an expiration date written on the box).

The Yuzpe method involves the off-label use of birth control pills. Yes, the same ones that people use as their regular contraception monthly. But this regimen for EC calls for taking multiple birth control pills — specifically ones that contain both estrogen and progestin — in two doses, 12 hours apart. (And in case you’re wondering: This method is named after a Dr. Albert Yuzpe. Because aren’t women-centered health terms often named after men?)

Someone who can’t access other forms of EC, because it’s the least effective EC method overall. Effectiveness ranges between 56% and 86% when used within the first three days of unprotected sex, according to one review. It’s considered safe when used as directed, and can be used up to five days out. In other news, if you regularly take birth control pills and miss one, here’s what you should know.

The pill — taken as usual birth control or as an EC — requires a prescription. And you might be able to get that online, from your doctor, or from a reproductive care clinic. A doctor or pharmacist will be able to tell you how many pills to take (as well as which ones). Costs can range from free with insurance to about $50 per pack, according to Planned Parenthood.

It’s typically thought of as a long-acting reversible contraception option (LARC) — because it is. But FYI: An IUD can also work as EC. It thickens mucus in the cervix (to stop sperm from coming in), thins the lining of the uterus (so eggs don’t stick around), and sometimes suppresses ovulation. As for the active ingredients: Copper is toxic to sperm. And the hormonal IUDs release levonorgestrel, that same hormone in Plan B.

Someone who’s looking for their contraception to stay put for a few years. Think: three to 10 years, depending on the type. Know that IUDs are over 99% effective at preventing pregnancy. And Dr. Addante said that although the copper IUD has been used as an EC longer than the hormonal kinds have, the hormonal IUDs are “just as good.”

If you’re getting an IUD, you need to schedule a doctor’s appointment to have it inserted. Which means if you’re using it as EC, make sure your clinic offers same-day appointments or something close to it. (Dr. Addante used to work at a clinic that offered one time slot per day for EC appointments.) IUDs are most effective as emergency contraception when inserted within five days of having unprotected sex. They can be fully or partially covered by insurance, but can get expensive without it. See: Prices can get as high as around $1,300.

EC is still legal and available in all 50 states. But because a number of people are worried about the impact of the SCOTUS decision and seeking out morning-after pills early, some stores have limited the amount you can purchase. All types of EC work differently and some might require you to schedule same-day appointments to get a prescription or a procedure. So it’s worth having a plan, whatever your situation and needs might be.