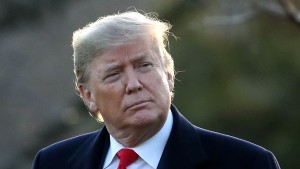 President Trump gets to keep his job...for now.

So the impeachment trial is over?

Yup. Nearly two months after the Democratic-majority House voted to impeach Trump, the Republican-majority Senate got its say. Yesterday, it wrapped up the third impeachment trial in US history when it voted – almost entirely along party lines – to acquit the president of...

Abuse of power…52 senators said 'not guilty,' versus the 48 who disagreed. Reminder: Dems argued that Trump abused his power as president by pressuring Ukraine to investigate his political rival – former VP Joe Biden (and his son, Hunter). And that the president did this while withholding nearly $400 million in military aid to Ukraine. Republicans dismissed the case as a partisan ploy by Dems. And didn't seem to think they succeeded in proving the president's motives here.

Obstruction of Congress...53 senators said 'not guilty,' versus the 47 who disagreed. Dems had argued that Trump obstructed Congress by blocking documents and witnesses during the House's investigation. Republicans, though, had said the House should have gotten what it needed before handing off the impeachment case to the Senate.

Can you explain the difference in numbers?

We sure can. It all came down to Sen. Mitt Romney (R-UT), who became the first senator to vote to remove a president of his own party from office. On abuse of power, he sided with the Dems and said the president was "guilty of an appalling abuse of public trust."

How did everyone react?

The White House said the trial ended in the president's "full vindication and exoneration." But yesterday, Rep. Jerry Nadler (D-NY) said the House may continue its investigation into Trump. And that it will likely subpoena former national security adviser John Bolton. As for the president, he plans to comment on his acquittal later today. And gets to carry on with the rest of his term and focus on his reelection campaign.

President Trump now joins two former presidents who've been impeached but not removed from office – and is now the first to run for reelection afterward. While yesterday's acquittal came as no surprise, the impeachment case could have repercussions for years to come.

Kirk Douglas. Yesterday, the acclaimed actor and Hollywood icon passed away at age 103. He was known for his starring role in "Spartacus" – and Oscar-nominated roles in "Lust for Life," "Champion," and "The Bad and the Beautiful." Douglas had received numerous awards including the Presidential Medal of Freedom – the nation's highest civilian honor. But his success transcended Hollywood. He was also a renowned philanthropist, donating to a variety of charities and causes including Alzheimer's patients and children's hospitals. Growing up poor, Douglas said his mother always told him that he "must take care of other people." His death was announced by his son and actor, Michael Douglas.

What has a case of shrinkage…

The US trade deficit. Last year, the trade deficit – when the US buys more than it sells – dropped for the first time in six years. Trump might do a victory lap, since he's promised to reduce the deficit, arguing it hurts the economy. But not all economists agree. In this case, the drop is being attributed to...

Psst...some of the trade drama linked to the deficit drop might be resolved by the 'Phase One' trade deal the US and China signed last month. Here's what else that deal could mean for the economy – and your wallet.

What's being judged by its cover…

Barnes & Noble. Yesterday, the company canceled an initiative it had introduced for Black History Month after facing backlash. It was planning to launch a series of classic novels with new cover art featuring people of color. But critics called the idea "literary blackface" and said the company should've instead focused on promoting books written by black authors. Barnes & Noble has said it acknowledges the concerns and will "continue to highlight a wide selection of books to celebrate black history."