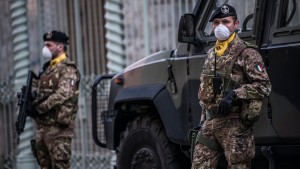 THE WORLD AT WAR

Countries all over the world are battling the coronavirus pandemic.

World leaders are grappling with new emergency measures, closures, and shutdowns as COVID-19 continues to spread. Here's how different parts of the world are handling it…

Europe…as in the new epicenter of the pandemic. Tens of millions of people are on lockdown. In Italy, some doctors have to triage – decide which patients to care for, and which not to. France is requiring everyone who leaves their home to carry a form or face a fine. Foreign nationals can't get into the EU for 30 days. And the UK abandoned its 'business as (almost) usual' approach when it found out that approach could lead to 250,000 deaths.

Asia...as in, China continues to report a slowing of new cases. That's after locking down tens of millions of people, widespread testing, and isolating patients. Now, businesses are reopening. Meanwhile, South Korea's drive-thru testing minimizes contact with health care providers and an app identifies infected areas. And India reported only a little over 100 people infected, which some say could be due to insufficient testing.

Australia...as in, its PM called this a "once-in-100-year" crisis. And warned the outbreak could last at least six months. The country is closing its borders to noncitizens starting tomorrow. Qantas airline is suspending international travel from the end of this month to at least the end of May.

Africa...as in, it hasn't reported as many infections as other continents. But the WHO is telling the continent to prepare for the worst. South Africa has declared a national state of disaster. And with one in five adult South Africans living with HIV, some are concerned the virus could hit especially hard.

South America...as in, several countries (think: Chile, Peru, and Argentina) have closed their borders. But not Brazil, apparently – which had its first known coronavirus-related death this week. The country's president reportedly thinks preventative measures are "hysteria."

North America...as in, there's no longer "nonessential travel" across the US-Canada border. Mexico has apparently provided little more than PSAs to prevent the virus's spread. In the US, HUD won't evict or foreclose on people until the end of next month, as one in 10 Americans have reportedly had to close their businesses. ICE is halting its crackdown on immigration and arrests, except those it considers "mission critical." And then there's the new relief package.

Yes please tell me about that.

Yesterday, President Trump signed a $100 billion package that provides free coronavirus testing as well as two-week paid leave (up to $511 a day) for certain Americans. Specifically, those who've tested positive or are being tested – as well as people ordered to stay home because of exposure or symptoms. But that's only part of the response plan: the Trump admin still wants to send checks to Americans.

Each country is grappling with COVID-19 differently, and at its own pace. But for a brief moment, it seems the world has agreed on a common enemy: this virus.

The US gov is ramping up its response to help the health care industry battle the virus. Yesterday, President Trump announced the following:

The Defense Production Act (DPA): The president said he'd invoke the Korean-War era law "just in case we need it." The law gives Trump the authority to speed up and increase the production of medical supplies and equipment. This includes ventilators, respirators, and medical gear, which the US is in dire need of.

Comfort and Mercy: aka two US Navy hospital ships that Trump has agreed to dispatch. Each has a 1,000-bed capacity, freeing up space, equipment, and manpower from civilian hospitals. Comfort will be deploying to New York Harbor and Mercy to a place that's yet to be determined on the West Coast. Both will be used to treat non-coronavirus related emergencies to protect city hospitals from being overwhelmed.

Skimm This: Our latest podcast ep explains how health care workers are battling the virus on the frontlines.

What's made a landmark ruling…

New Zealand. Yesterday, lawmakers passed a bill decriminalizing abortion by treating the procedure as a health issue versus a criminal one. Previously, New Zealand law only allowed a woman to have an abortion in cases like incest or if the pregnancy was a threat to her mental or physical health. Otherwise, the procedure was reportedly punishable by up to 14 years in jail (but that part was never enforced). Now, women who are up to 20 weeks pregnant can get an abortion. Those over 20 weeks will need approval from a doctor. Abortion rights groups celebrated the long-awaited move, reportedly saying they were glad the NZ parliament "recognized that women have bodily autonomy."

Utah. Yesterday, the state was hit by a 5.7 magnitude earthquake – Utah's largest since 1992. It caused temporary power outages for tens of thousands of people and caused the Salt Lake City International Airport to temporarily shut down. Despite no injuries reported, the earthquake disrupted gov response efforts to COVID-19. And Salt Lake City's iconic Mormon temple reportedly saw some damage.

Who's going back to the 'campaign' drawing board…

Sen. Bernie Sanders (I-VT). Yesterday, the Democratic presidential candidate's campaign manager said Sanders is "assessing" after losing multiple state primary contests in recent weeks. He's currently way behind former VP Joe Biden on the number of delegates. TBD if and when Sanders will have an update for the Dems.

...Oh and on the Republican side, President Trump's only primary challenger dropped out. Weld, can't say he didn't try.

When you're trying to romaine safe at the grocery store…

Be prepared and don't forget about seniors.