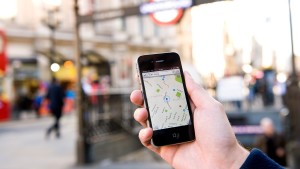 Apple and Google have a tech fix for COVID-19.

Yesterday, they launched a new software that allows public health officials around the world to create their own contact tracing apps. Thanks to Bluetooth (so fancy), the app could detect people nearby you may have interacted with. If someone tests positive for COVID-19 and shares it with the app, users who were near them within the last 14 days will get notified.

The power of technology.

Yup. The idea is to boost regular contact tracing, usually done by humans. That's when public health staffers help an infected person track down who they came into contact with – in an effort to trace the spread of the virus and try to contain it. Contact tracing is seen as a potentially critical tool to help slow COVID-19's spread. And Apple and Google's software is meant to make the process faster and more effective.

Right. Both companies have had their fair share of scandals. See: recording people's personal convos, collecting medical data without consent, a bug that exposed millions of users' data, the list goes on. The companies are saying 'we hear you' and that they're limiting who can access the data. Everything will apparently be kept private – only used by health officials – and not stored in a central database. The companies also promise the software won't use GPS tracking or collect phone numbers.

Ok then. When does it roll out?

That's unclear. But the tech is officially up for grabs for health officials to use and create their own apps. Apple and Google said several states (hi, Alabama, North Dakota, South Carolina) are jumping on board. And that 22 countries have requested the software. Germany, Italy, and Ireland are reportedly expected to release theirs in the coming weeks.

Countries like China and South Korea have gotten praise for their widespread use of contact tracing. And Apple and Google's help could prove valuable, especially as all 50 US states look to ease restrictions and get their economies back on track. But coming after years of scandals, some aren't ready to take tech's assurances at their word.

President Trump. Yesterday, he said he'd withhold federal money from Michigan and Nevada if they go ahead with plans to expand vote-by-mail efforts amid the coronavirus pandemic. He called the states' moves "illegal" and said mail-in ballots could lead to "voter fraud." But studies have shown fraud is rare for mail-in voting and that it doesn't necessarily benefit one party over the other. It wasn't clear what money Trump would hold back. And if he'd have the power to withhold federal funds approved by Congress.

What else Michigan has on the mind...

These dams. This week, floodwaters breached two dams in central Michigan, forcing about 10,000 people to evacuate. Recent heavy rains were blamed for the record-level rise of Tittabawassee River. And Gov. Gretchen Whitmer (D) worried this would be the worst flooding "in 500 years." She declared a state of emergency for Midland County, whose downtown area could be under nine feet of water. So far, no deaths or injuries have been reported. And President Trump tweeted he had "sent our best" military and FEMA teams to help.

India and Bangladesh. Yesterday, the most powerful cyclone in over a decade hit the countries. At least 22 people were killed. But officials evacuated nearly 3 million before the storm, a move they said saved lives. Bangladesh reportedly said at least a million people lost power.

Who's mastered some escape rooms…

These guys. Yesterday, US authorities arrested a former Green Beret and his son for their alleged roles in helping smuggle Carlos Ghosn out of Japan. Back in December, the former Nissan chief was facing trial there on charges of financial crimes (think: underreporting his income for years). But the two men – who clearly watched too much David Blaine – are accused of helping him sneak onto a private jet in a large box and flee to Lebanon. Now, the two men are expected to be extradited to Japan to face trial.

While some babies are cute...