Protests, the WHO and the G7, and a Golf-Playing Coyote | Daily Skimm | theSkimm
Subscribe

Daily Skimm: Protests, the WHO and the G7, and a Golf-Playing Coyote 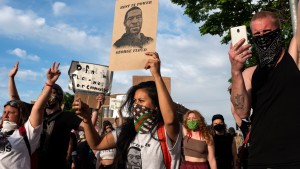 This weekend, many Americans banded together in protest and solidarity.

It's now been a week since 46-year-old George Floyd died after a Minneapolis police officer held him down with a knee on his neck for nearly nine minutes. Two other officers appeared to help pin Floyd to the ground while another stood nearby. Video of Floyd saying "I can't breathe" went viral, sparking calls for justice. While all four officers involved in Floyd's death have been fired, only one has been criminally charged. Many Americans are exasperated by the deaths of black people time and again at the hands of law enforcement. And have taken a stand.

How'd that play out?

With protests across the country and around the world. Tens of thousands of people turned out, calling for the three remaining officers to be charged and for an end to the inequality and maltreatment of black Americans. In many areas, people peacefully gathered with some police officers joining the protests in solidarity. In some cities, protesters looted businesses and set fire to police cars and buildings. But that's not all that happened.

There were clashes with police. In New York City, two police vehicles drove into a crowd of protesters. And across several cities, officers fired tear gas and rubber bullets, injuring protesters, bystanders, and journalists. Police have reportedly arrested at least 4,400 people across the country. Several people have been killed, including one man who was reportedly shot and killed in Louisville, KY early today when the police and the National Guard opened fire after someone in the crowd shot at them.

What's been the reaction?

It varies. Some say that protests are a worthwhile cause, but people shouldn't resort to violence because it can overtake demonstrators' message. Others say that the country has tried peacefully protesting police brutality (see: Colin Kaepernick) and that there was a negative response to that, too. And then there are reactions to the police.

There've been reports of violence against officers and more than a dozen cities have responded by setting up a curfew. Meanwhile, human rights advocates are holding law enforcement to task. Amnesty International is calling on the US to stop militarizing its response to protesters, which can escalate the situation.

Where's the president in all this?

Tweeting a mix of reactions. Last week, he called for accountability and asked for the DOJ's investigation into Floyd's death to be expedited. But later, he referred to protesters as "thugs" and added "when the looting starts, the shooting starts." Twitter blocked the tweet for violating its policy against "glorifying violence." The president reportedly said his comments were misconstrued. He also said he'd designate antifa – a far-left group – as a terrorist organization for its alleged role in instigating some of the violence at protests. Some couldn't help but notice a stark difference between his response to these protests and his support for Michigan protesters last month who carried rifles, calling for an end to COVID-19 restrictions.

There are fears that these mass gatherings could spread it. Officials are worried about the close proximity of protesters – some who wore masks, some who did not. Atlanta's mayor warned the demonstrations could spread the virus particularly among communities of color, who've already been hit disproportionately hard.

These last few months, the coronavirus pandemic and its impact on the economy have dominated the headlines. But George Floyd's death has galvanized people around the world in a way that hasn't been seen in decades. While some are hopeful this added attention could lead to real change, only time will tell if society continues to band together to take up this fight once daily routines go back to "normal."

Which world orgs are on the Trump admin's mind...

The WHO. President Trump said the US is officially ending its relationship with the World Health Organization. The US gives the org about $450 million a year – the WHO's biggest donor to date. But Trump has long accused it of mishandling its response to the coronavirus outbreak (think: waiting weeks before calling it a pandemic, not supporting travel bans). After temporarily halting US funding, Trump threatened last month to pull out altogether if the WHO didn't commit to "improvements" within 30 days. Trump had said he wanted the WHO to show "independence from China," but he's now saying the org "failed" to make changes. And that the US will start redirecting its WHO funding to other "deserving urgent global public health needs."

The G7. Over the weekend, Trump said he was postponing the G7 summit – the annual geopolitical meeting between the US, UK, Canada, France, Germany, Italy, and Japan – until at least September. And that he wants to invite more countries (think: Russia, India, Australia, and South Korea) because the G7's an "outdated group." But at least one member nation (hi, Canada) is saying 'Russia can't sit with us,' considering it was already kicked out of the then-G8 in 2014 for annexing Crimea from Ukraine.

Who stuck the landing...

Bob Behnken and Doug Hurley. Yesterday, the astronauts made it to the International Space Station. The two were supposed to leave Florida's Kennedy Space Center on Wednesday. But because of a literal rain check, the 19-hour trip was delayed until Saturday. It marks the first time a private company (Elon Musk's SpaceX) sent astronauts into orbit. Now, the pair will have several weeks up in space to test the capsule's capabilities.