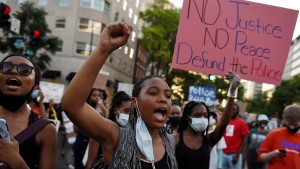 Over the weekend, people around the world joined together in support of US protests against racism and police brutality.

Thousands – from Paris, Berlin, and London to Cape Town, Seoul, Sydney, and more. In the UK, protesters toppled a statue of a slave trader and threw it into the nearby harbor. Demonstrators chanted "Black Lives Matter" and "George Floyd" in solidarity with US protesters. Back in the US, tens of thousands of people protested across all 50 states. In NYC, people took to the streets despite news of a judge suspending habeas corpus. Meaning, police could detain someone for over 24 hours without being formally charged with a crime. And in Washington, DC, President Trump said he ordered the National Guard to begin withdrawing. But that's not all.

DC's mayor directed local artists and others to paint a mural – which stretches two blocks – reading "Black Lives Matter." She also renamed a section of the street facing the White House "Black Lives Matter Plaza," thought to be in opposition to the president's response to the movement. Protesters added "Defund the Police" to the mural – a call to action that's grown louder in recent days. And there's a big update on that front.

Yesterday, the Minneapolis City Council pledged to disband its police force of more than 800 officers. The council members are now looking to replace the department with a community-based public safety model. Other US cities have disbanded police departments and replaced them, but it's unclear what exactly it will look like in Minneapolis or when it will go into effect. But nine of the council's 13 members announced their support – meaning that the mayor can't veto it. It came days after the Minneapolis police were banned from using chokeholds. Next up: action on the national level.

Today, congressional Democrats are set to unveil legislation targeting police misconduct and racial bias. If passed, it would establish a standard for use of force, ban chokeholds, end the use of "no-knock" warrants in drug cases, work to combat racial bias, and reportedly track police misconduct through a public national registry. It could be one of the most aggressive interventions into policing by Congress.

Years after the Black Lives Matter movement started, we're now seeing a groundswell of support for policy change and action. It's happening not only by individuals and companies – but on the city, state, and international level. And it shows no signs of slowing down.

What is still looming in the background…

COVID-19. Yesterday, the number of known coronavirus deaths surpassed 400,000 around the world. Data also shows the number of infections is going up, with more than 7 million cases worldwide. But with underreporting and limited testing, the real number could be much higher. Case in point: Brazil. Over the weekend, it stopped releasing the number of deaths and infections there. Meanwhile, in the US, all 50 states have reopened in some capacity – with NYC entering phase one of reopening its economy today, as hundreds of thousands return to work.

...Oh and speaking of the economy, the Dow jumped more than 800 points on Friday. It's thanks to a jobs report that showed the economy is showing signs of rebounding earlier than expected.

The NFL. Last week, Commissioner Roger Goodell admitted the NFL was "wrong" for not listening to its players regarding racism concerns. And encouraged players to peacefully protest. Goodell's video message came nearly four years after former San Francisco 49ers quarterback Colin Kaepernick started kneeling during the national anthem as a way to protest police brutality. The controversy had led the NFL to endorse a short-lived policy requiring players to stand for the anthem or stay in the locker room. And while Goodell is saying 'sorry,' he neither mentioned Kaepernick nor apologized to him.

Buffalo, New York. Last week, two officers were suspended without pay after video showed them pushing a 75-year-old protester to the ground. Authorities could be seen walking away from the protester as he bled from his ear. Following their suspension, 57 members of Buffalo police's emergency response team resigned in support of their coworkers. Erie County Executive Mark Poloncarz said he was "exceptionally disappointed" by the resignations. An investigation is underway and the two officers now face assault charges.

JK Rowling. Over the weekend, the "Harry Potter" author received backlash after she commented about an article that mentioned "people who menstruate." She wrote on Twitter that there "used to be a word for those people" and went on to imply that women are the only ones who menstruate – a comment many saw as an attack on the transgender community. In response to backlash, Rowling said "I know and love trans people" but that she was against "erasing the concept of sex." It's not the first time the author's been seen as using her platform to undermine the transgender community.

Who's moving up in the world…

Former VP Joe Biden. He has officially earned enough delegates to clinch the Democratic nomination for president and avoid a contested convention.