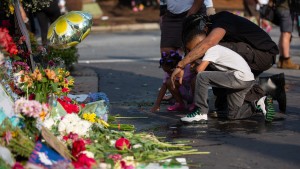 Another Black American has died at the hands of police.

Rayshard Brooks. On Friday night, police responded to a call about a man allegedly sleeping in his car in a Wendy's drive-thru. They confronted 27-year-old Brooks and had him take a sobriety and breathalyzer test. Atlanta PD's body cam footage seems to show Brooks being cooperative with the two officers for more than 20 minutes. When officers tried to make an arrest, there was a struggle and Brooks ran off with an officer's taser, allegedly pointing it back at officers and firing it. That's when one of the officers fired his gun and Brooks fell to the ground. The county's medical examiner's office said Brooks was shot twice in the back and ruled his death a homicide. The father of four was pronounced dead at a local hospital.

The shooting sparked outrage and added momentum to earlier anti-racism protests in Atlanta, with hundreds taking to the streets. It's the 48th officer-involved shooting that the Georgia Bureau of Investigation has been asked to investigate this year. On Saturday, Atlanta Mayor Keisha Lance Bottoms said she didn't believe the shooting was a "justified use of deadly force." And the city's police chief stepped down.

Ok but what about the officers?

The one who shot Brooks was fired and a second officer was placed on administrative leave. The county's DA has launched an independent investigation into the deadly shooting. And said a decision on whether the officers would face charges could come as early as Wednesday. This comes amid already heightened tensions nationwide and calls for police reform.

Republicans, led by Sen. Tim Scott (SC) – the chamber's lone Black Republican – could introduce legislation on police reform as soon as Wednesday. Scott said the JUSTICE Act would ensure that all police departments provide the DOJ info on use of force that leads to "serious bodily injury and death." And that it'll address officer misconduct and de-escalation training tactics. Unlike the House Dems' bill, it isn't expected to challenge "qualified immunity" – which broadly protects officers from civil lawsuits. While there is division over what reform looks like, a national ban on chokeholds is getting support from both sides of the aisle.

Despite three weeks of nationwide protests calling for an end to police brutality and systemic racism, another Black man – Rayshard Brooks – has died at the hands of police. Now, another family joins the long list of those waiting for justice.

The Trump admin. On Friday, it finalized a rule to roll back protections for transgender people. In 2016, the Obama admin changed federal health care guidelines to include gender identity in the definition of sex discrimination. This new rule removes that. Supporters say the reversal lets health care workers deny access to procedures that go against their religious or moral beliefs – like gender reassignment surgery. And insurance companies could also deny coverage. But critics say that making it easier for doctors and hospitals to deny health care to transgender patients is especially dangerous during a pandemic. And some pointed out that it came amid Pride Month – and on the anniversary of the Pulse nightclub shooting. The new rule is expected to go into effect in August, but civil rights groups are suing.

California. Officials there are investigating the deaths of two Black men found hanging from trees in Southern California. On May 31, authorities in Victorville found the body of 38-year-old Malcolm Harsch. Ten days later, the body of 24-year-old Robert Fuller was discovered about 50 miles away in Palmdale. Authorities said they believed Fuller died by suicide. But his family pushed back and called for an independent investigation. Harsch's family has yet to hear the official cause of death – even though an autopsy report was reportedly finalized. They fear his death may also be wrongly ruled as a suicide, and are reportedly planning to conduct their own independent investigation.

COVID-19. Over the weekend, Beijing closed down a wholesale food market as the city linked more than 50 new coronavirus cases to it. With fears that the virus may be resurfacing, the country has ordered people to quarantine if they've visited the market or been in contact with someone who has. This comes as one analysis has found 70 countries have seen a recent increase in the number of coronavirus cases.

Russia. Today, former US Marine Paul Whelan was sentenced there to 16 years in prison on spying charges. Whelan has denied the charges and says he was set up in a sting operation. The US Embassy in Russia called his trial unfair and Secretary of State Mike Pompeo has demanded his release.

President Trump. After backlash, he has rescheduled his Juneteenth rally in Tulsa, Oklahoma. Trump said he's moving the rally to June 20th in response to requests from his "African American friends and supporters.