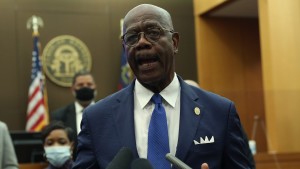 On Friday, two police officers approached Brooks while he was sleeping in his car in a Wendy's drive-thru in Atlanta, Georgia. After a peaceful encounter, they tried to arrest Brooks but he ran away with an officer's taser. Former officer Garrett Rolfe then shot and killed him. Neither officer offered medical treatment for more than two minutes as Brooks lay dying. Now, Rolfe – who has had disciplinary issues in the past – faces 11 charges, including felony murder and aggravated assault with a deadly weapon. He could face life in prison or the death penalty.

What about the other officer?

The district attorney also brought three charges against Devin Brosnan, including aggravated assault for standing on Brooks's shoulder as he struggled for his life. The DA said Brosnan agreed to become a cooperating witness – which would make him one of the first officers in his county to testify against someone from his own department. But the officer's lawyer denied that he agreed to testify or plead guilty. Brosnan could face up to 20 years in prison.

Charges aren't normally brought this quickly, are they?

No, they're not. Brooks's family says they're "grateful" for the swift action. But others weren't as pleased. The Atlanta police union dismissed the charges as politically motivated at a time when the DA is up for reelection. President Trump weighed in, too, saying he hopes that Rolfe "gets a fair shake" and that police have "not been treated fairly in our country." But Atlanta Mayor Keisha Lance Bottoms (D) – who introduced police reform addressing the use of force earlier this week – reportedly said "we've got to train our officers differently." She's not the only one.

Who else is saying it?

Senate Republicans. Yesterday, they introduced the most sweeping GOP police reform legislation in years. If passed, it would establish commissions to study issues of law enforcement and race, as well as push police departments to ban the use of chokeholds, improve data collection on officers' discipline records, and provide funding for things like de-escalation training and body cams. It would also make lynching a federal crime, an effort that stalled in the Senate earlier this month.

Officers are rarely convicted for shootings. But with nationwide protests against police misconduct and systemic racism, the charges in this case came especially quickly. Now, Brooks's family hopes they'll have a chance at justice, while Atlanta police are calling out of work.

Where COVID-19 is under a microscope...

Beijing. For the first time in nearly two months, the city's dealing with a new coronavirus outbreak (read: 137 new infections in six days). Authorities said it could be linked to human-to-human transmission at a Beijing food market. In response, the city has tested more than 350,000 people and cancelled more than 1,000 flights to and from its airport. Schools are suspended. And dozens of neighborhoods are back to doing temperature checks. But that's not all: at least four other provinces have linked new infections to the market, causing some cities to impose quarantine measures.

Six US states. Arizona, Florida, Oklahoma, Oregon, Nevada, and Texas have seen record upticks in coronavirus cases this week. Texas in particular saw its highest single-day increase on Tuesday with more than 4,000 new infections. Governor Greg Abbott (R) believes increased testing is behind the growing number of cases. But health experts are also attributing it to businesses reopening and people getting together for Memorial Day weekend. Meanwhile, Dr. Anthony Fauci reminded everyone fearing a second wave that we're still in a "first wave," and said people are being "risky" by not adhering to safety guidelines.

Who's saying 'can I have your attention, please'...

John Bolton. Previews of his memoir show the former national security adviser has some bombshell allegations against the president. Like his claim that President Trump asked Chinese President Xi Jinping to buy US farm products to help him win reelection. And that Trump seemed to endorse Beijing's detention of hundreds of thousands of Uighurs in concentration camps. The book also implies Democrats should have looked into Trump's dealings with Xi. But they come months after Bolton himself refused to testify in the House impeachment hearings. Now, the president is calling Bolton "a liar." And the Justice Department is trying to stop the book's release next week on the grounds of protecting national security.

Danny Masterson. Yesterday, the "That '70s Show" actor was charged with sexually assaulting three women. The cases stem from the early 2000s and all three women claim Masterson raped them in his home. The actor's lawyer said his client is innocent and that his family is "in complete shock" at the allegations. Masterson is out on bail and due in court later this year.

Chris D'Elia. Multiple women accused the comedian this week of sexual misconduct ranging from inappropriate messages to soliciting nude photos of underage girls. D'Elia denied the allegations and said all his relationships "have been both legal and consensual."

Where you'll be seeing some changes…

Your pantry. Yesterday, the company behind Aunt Jemima – the popular maple syrup and pancake mix brand – said it's changing its name and logo. Hours later, Mrs. Butterworth's and Uncle Ben's said 'think we might need a rebrand, too.' The companies said they recognize their role in ending racial bias and want to do their part by evolving their brand packaging.

Who's getting ready for a royal close-up...