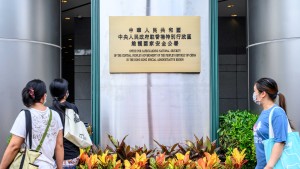 Not Business as Usual

Hong Kong could be facing an economic divorce from the rest of the world.

The national security law. Last week, China's imposed law on the territory went into effect, cracking down on pro-democracy protests. But in recent days, China's added a few more rules to the law without any warning. They seemingly give Hong Kong police the same powers as the mainland when it comes to surveilling and banning dissent online. Which effectively diminishes the "one country, two systems" that's been in place since it was handed over in 1997.

Under British rule, Hong Kong saw significant economic progress in the 1960s and '70s and attracted foreign investments. In the late '90s, the territory was handed back to China on the agreement that it still maintained some autonomy, like its capitalist economic system. Because of the mainland's internet censorship (aka China's Great Firewall), many tech companies have either chosen to comply with the Chinese gov's restrictions on speech or been shut out from the market. Hong Kong was different...but now things have begun to change.

Police now have the power to investigate publishing platforms and internet providers' data. They can also order them to delete any info that they believe undermines China's national security. And if they don't comply, they face up to a year in jail or serious fines. This leaves big tech companies scrambling to figure out how to do business in Hong Kong under such scrutiny.

Which companies are you talking about?

Facebook, Twitter, Google, Zoom, Microsoft...for the most part, all the Silicon Valley giants. They've all suspended Hong Kong's requests for their data while they review the new law. Even the controversial Chinese app TikTok – which the US is considering banning – is pulling out of the territory. The move reportedly has little to no effect on their revenue, and the companies' decision to halt compliance with the Hong Kong gov is seen as a show of support to the territory's 7 million citizens.

This is China's latest move to exert power over Hong Kong. And companies, citing human rights concerns, are on the fence about keeping their business in the territory. It leaves the city's future as a financial hub uncertain, as residents grapple with the political – and now economic – consequences.

Who got his results back…

Brazilian President Jair Bolsonaro. Yesterday, he confirmed he tested positive for COVID-19. Bolsonaro has prioritized his country's economy over public health concerns, calling the virus a "little flu" and refusing to shut down businesses on a national level. Instead, he's left it to governors to contain local outbreaks. The results of his strategy (which some have compared to President Trump's) are clear: Brazil is the world's second-hardest hit country after the US, with more than 1.6 million infections and 65,000 deaths. Still, Bolsonaro has continued to attend political rallies, often without a mask, despite a judge threatening last month to fine him. Bolsonaro says his symptoms include a fever, muscle pain, and fatigue. But that he's feeling "fine."

The WHO. Yesterday, the White House gave the official heads up that the US is leaving the World Health Organization. President Trump froze funding to the WHO back in April, criticizing its handling of the coronavirus outbreak. Specifically, he accused the org of not holding China accountable for its role in the outbreak. A month later, he announced plans to leave the org entirely. Now, the WHO has one year's notice that this is happening. Lawmakers on both sides of the aisle criticized the decision to leave the international public health body as the US is still reeling from the pandemic, with more than three million cases in the country.

Novavax. Yesterday, the federal gov granted the vaccine maker $1.6 billion to help speed up its development of a coronavirus vaccine. This is part of the admin's Operation Warp Speed – a federal program meant to get Americans access to a vaccine ASAP. While Novavax isn't the first company to get such funding – drugmakers AstraZeneca and Moderna have too – it has never brought a drug to market before. This grant would fund the production and delivery of 100 million doses of the vaccine.

...Oh and speaking of the fight against COVID-19, the EPA gave Lysol its stamp of approval, confirming that two of its products kill the virus on surfaces. Emphasis on surfaces.

What's making moves on and off the court...

The WNBA. Earlier this week, the league announced it'll dedicate the 2020 season to social justice reform. Players will wear shirts during warmups that say "Black Lives Matter" on the front and "Say Her Name" on the back – a move honoring Breonna Taylor and other "victims of police brutality and racial violence."

Who's promising to push for better representation...