SCOTUS Wraps It Up, COVID-19 in the Air, and "The Wonder Years" Reboot | Daily Skimm | theSkimm
Subscribe

Daily Skimm: SCOTUS Wraps It Up, COVID-19 in the Air, and "The Wonder Years" Reboot 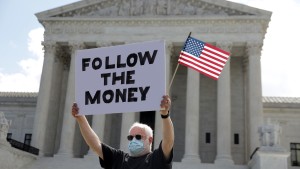 This Season on SCOTUS

On its last day before summer recess, the Supreme Court issued long-awaited rulings.

President Trump's financial records. Specifically, over subpoenas from a prosecutor and Congress to get access to them. Here's how they ruled:

On one request: The Supreme Court cleared the way for Trump's financial records to be released to NY prosecutors. Last year, Manhattan's DA subpoenaed his financials in an investigation into alleged hush-money payments to two women (remember Stormy Daniels?). But Trump said he didn't need to hand anything over because he has presidential immunity. The Supremes disagreed, with Chief Justice John Roberts saying "no citizen, not even the president" is above a criminal investigation.

On another: The Supreme Court ruled that Congress (and the public) could not see Trump's financial records...for now. Reminder: House Democrats have been looking into whether Trump lied on his financial records to reduce his taxes. But Trump has claimed he can't release his tax returns because he's under audit by the IRS (he can). Now, the Supremes are saying House Dems may have overreached on this one. And sent the case back to the lower courts.

Trump said he was partly satisfied but didn't think the decisions were "fair." The Manhattan DA called it a "tremendous victory." And House Dems said they'd keep pushing for his tax returns in lower courts. Meanwhile, the Supremes hung up their robes as they headed out to summer break.

Indeed. But before they enjoy their socially distant summer, they also ruled yesterday that state authorities do not have the right to prosecute Native Americans on tribal land. The majority conservative court had a lot on its plate for the first half of 2020. Here are the highlights for this term:

Victories for liberals: That includes blocking the Trump admin's attempt to end the Deferred Action for Childhood Arrivals (DACA). Protecting LGBTQ+ people in the workplace. And striking down a Louisiana law that would have added regulations to abortion clinics there.

Victories for conservatives: The court prioritized religious freedom in a few cases. Like ruling that religious schools cannot be exempt from a tax credit. And that employers don't have to offer birth control coverage if it goes against their moral or religious beliefs. Also, that religious institutions don't have to follow federal discrimination laws.

Yesterday brought a highly anticipated ruling for President Trump and we may not see its full effects until after the election. But this term covered an array of issues. And while some thought the majority conservative court would walk back LGBTQ+ and abortion rights, the court surprised many with its rulings.

What's saying 'we're looking into it'...

The WHO. Yesterday, the org said there appears to be evidence coronavirus can be spread through the air. Reminder: the WHO had previously said the primary way it spread was through respiratory droplets aka when a person coughs or sneezes. But earlier this week, more than 230 scientists published a letter pushing the org to acknowledge that it could also be airborne (think: spread through air particles) in crowded indoor places – like gyms, restaurants, or choir practices. Now, the WHO's saying 'hm, you're probably right' but that it needs to do more research. Put this in the column for 'another reason to wear a mask.'

What police are investigating…

The death of Seoul's mayor. Yesterday, officials found the body of Park Won-soon in a park in Seoul, South Korea, hours after his daughter reported him missing. His death comes soon after local sources reported a secretary had accused him of sexual harassment. Police haven't said how he died, but said there were no signs of foul play. Seoul officials said he left a note that said he was "sorry to everyone." Park – a former human rights lawyer – was considered the second-most powerful government official in South Korea. He'd been mayor since 2011 and was seen as a potential presidential contender in 2022.

What's looking to get China's attention...

These sanctions. Yesterday, the US imposed sanctions on several senior Chinese officials for alleged human rights abuses of Uighurs and other ethnic minorities. The sanctions bar the officials and their families from traveling to the US. One Trump admin official reportedly called it "the highest level sanction that's ever been designated in China." Since 2016, China's detained an estimated 1 million or more Uighurs in "re-education" camps. Today, China said it would respond with "reciprocal measures." Beijing has previously denied these camps exist.

Who people are thinking of...

Naya Rivera. This week, the "Glee" actress went missing after an afternoon out on a lake with her four-year-old son in Southern California. He was found safe on the pontoon boat she had rented, but authorities are still searching for her. Yesterday, they announced Rivera was presumed dead after what appears to be an accidental drowning. Her "Glee" co-stars and other celebrities took to social media asking for prayers for her family.

What's going to need a narrator...