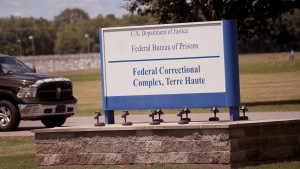 Yesterday, the DOJ executed a federal prisoner for the first time in nearly 20 years.

Daniel Lewis Lee, a former white supremacist convicted in 1999 of killing an Arkansas family of three. He was scheduled to be executed on Monday, but a federal judge halted it, saying Lee and other inmates had argued the injection method posed "an unconstitutionally significant risk of serious pain." Yesterday morning, the Supreme Court argued that the method had been used in over 100 executions "without incident" and ruled 5-4 to let Lee's execution move forward. He died hours later at a federal prison in Terre Haute, Indiana – where most of the inmates on federal death row are reportedly held.

Yes. Currently, there are 62 inmates on federal death row, and more than 2,600 on state death row. The difference? The type of crime...usually. States have the power to impose the death penalty in criminal cases. But 32 states have reportedly either abolished it or haven't carried out an execution in more than a decade. Federal executions are usually imposed for federal crimes (treason, espionage, certain murder offenses). But they are rare, held at the request of the Justice Department, and there hasn't been one since 2003. Last month, the DOJ ordered the federal executions of four inmates convicted of murdering children. Lee was the first of the four to be executed.

The death penalty has long been a topic of debate in the US. But after a botched execution in 2014, the DOJ reviewed how capital punishment happens in the US, including the use of lethal injection drugs. Last year, Attorney General William Barr laid out a new federal lethal injection protocol – a drug called pentobarbital – and said he would resume the federal death penalty to bring justice to victims "of the most horrific crimes." The three other men are set to be executed today, Friday, and next month.

President Trump has been a vocal supporter of the death penalty. And AG Barr said Lee "finally faced the justice he deserved." But Lee's lawyer called the execution "shameful." And the NAACP Legal Defense Fund said the return of the federal death penalty "paves the way" for future executions that could disproportionately affect Black and Latino death row prisoners.

The US is an outlier among other democracies for its use of capital punishment. While the UN believes the death penalty has no place in the 21st century, the Trump admin argues it helps bring justice to the families of those lost.

The UK. Yesterday, it announced it would bar the Chinese tech company Huawei from operating in the country and helping to build its 5G network – a reversal from what it said in January. The UK said the change was due to new US sanctions on Huawei that created uncertainty around its supply chain. And that the UK could "no longer be confident" in the tech's future security. Come January, telecom operators will be banned from buying Huawei equipment. And must remove all existing equipment by 2027. China's ambassador to the UK called the decision "disappointing and wrong." But it's seen as a win for President Trump who's argued Huawei is a national security threat.

Whose case has some updates...

Ghislaine Maxwell's. Yesterday, the former girlfriend and longtime associate of convicted sex offender Jeffrey Epstein pleaded not guilty to federal charges during a virtual bail hearing. Maxwell was arrested earlier this month and is accused of helping Epstein recruit, groom, and abuse minors as young as 14. A federal judge denied her bail, arguing that her wealth, citizenship in the UK and France, and other strong international ties made her a flight risk. Maxwell's trial is scheduled to begin next July.

...Oh and speaking of court cases, yesterday a federal judge rejected a proposed $19 million settlement between Harvey Weinstein and his accusers, saying that it wasn't fair to the women in the case.

This coronavirus vaccine trial. Yesterday, biotech company Moderna said it had received positive results from Phase 1 of its drug trial. All 45 participants produced antibodies – with levels of protection similar to people who'd recovered from the virus. Researchers will begin Phase 3 of the trial – the final stage – later this month with 30,000 participants. And if all goes well, it could produce the vaccine by 2021.

...Oh and speaking of COVID-19, the CDC director says it could be under control within one or two months if everyone wears a mask.

Who's not heading back to DC…

Former Attorney General Jeff Sessions. Yesterday, he lost a Republican runoff for the Alabama Senate seat he held for 20 years before becoming President Trump's first AG. Sessions was one of Trump's first supporters in Congress. But their relationship fell apart after Sessions recused himself in the investigation into Russian election meddling in 2017. After that, Trump frequently criticized him in public and Sessions resigned the next year. And in this race, Trump endorsed his opponent – former college football coach Tommy Tuberville – who will now face incumbent Sen. Doug Jones (D) in the general election this fall.

Who's breathing a sigh of relief…

International students. Yesterday, the Trump admin rescinded a policy that would've required foreign students to take some in-person classes this fall to stay in the US. Harvard, MIT, and 17 states (plus DC) sued. Now, the admin's saying 'policy canceled.'

Whose wheels keep on turning…

No, you're not dreaming. It's your last chance to file your taxes this year. While the deadline is usually April 15, the federal gov pushed it because of COVID-19. Today is the day. Need some help? We got you.