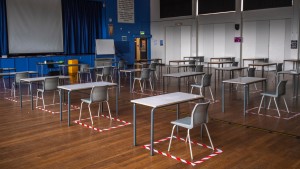 Back-to-school season is coming up. And in some areas it's unclear how it will play out.

Dozens of states across the US are grappling with an increase of COVID-19 cases. That's especially true in some Southern states, as Florida, Georgia, Texas, and Arizona have experienced record-high infections. In response, some school districts (see: Los Angeles, San Diego) are committing to starting online. Others (see: Kansas) are opening up but reportedly trying to hit 'delay' on the start date. Many still haven't announced plans – and are waiting on more data.

The CDC has said it doesn't "have evidence" that kids drive the virus's spread. But a new study from South Korea suggests that older kids (think: middle and high schoolers) can spread it just as much as adults. All of this raises serious safety questions for kids, their families, teachers, and school staff.

On the one side...the Trump admin is pressuring governors to find a way to make in-person classes happen. And has threatened to cut funding from schools that don't. The American Academy of Pediatrics last month urged opening up schools – and pointed to the developmental, social, and mental health benefits of in-person schooling. Some research suggests remote learning can also hold back minority children. Health and education officials say kids from families with lower incomes and children with disabilities are also affected. Meanwhile, parents are struggling to teach their kids themselves – and many can't afford to pay for child care.

On the other side...this is a pandemic. And large gatherings can come with serious dangers. Yesterday, Florida's largest teachers union sued the state for requiring schools to reopen next month. It comes as Florida reportedly has the highest daily rate of new COVID-19 cases in the nation. The American Federation of Teachers – the country's second-largest teachers' union – has turned to Congress for help, estimating it would take half a trillion dollars to safely reopen schools.

So what's the answer?

Great question. The CDC was planning to release updated guidelines on reopening schools last week, but then said it needed more time. Many people have opinions – and legitimate needs. For safety, financial security, and for their kids' development.

The pressure is on for schools to open safely – but many can't agree on how to do that and how to protect teachers, staff, and students. And no matter what officials decide, it looks like many Americans (younger and older) could stand to be harmed.

Skimm This: Our latest podcast ep goes deeper with interviews on the topic

The European Union. Yesterday, its leaders reached a landmark $857 billion deal to address the coronavirus pandemic. After nearly five days of intense negotiations, the EU's 27 member countries have agreed to the aid plan. They'll reportedly raise money for relief by selling bonds. Part of the money – which will be in grants that don't have to be repaid – will go to help countries hardest hit by the pandemic like Italy and Spain. The president of the European Council called the deal "strong." The European Parliament still needs to sign off on the plan.

...Oh and speaking of things happening across the pond, Oxford University just reported promising results from a potential coronavirus vaccine

The "Strike for Black Lives." Yesterday, organizers said tens of thousands of people walked out of work to push for an end to racial injustice and economic inequality. The protests – organized by unions and racial justice groups – were in 160 cities. Strikers called for government officials and corporations to raise workers' pay, provide health care, and guarantee the right to unionize. Some workers marched for the full day while others walked out for eight minutes and 46 seconds – the amount of time a now-fired police officer held his knee on George Floyd's neck. The strike comes nearly two months after Floyd's death.

Polar bears. Yesterday, scientists said they could go nearly extinct by 2100 if humans don't cut down on greenhouse gas emissions. Currently, there are about 25,000 polar bears in the wild. But higher global temps are melting Arctic sea ice – the bears' main habitat. Scientists say many would have to move to land in order to survive and they'll struggle to find enough food. Yeah, we're not feeling great about it either.

When the news cycle is just too much…