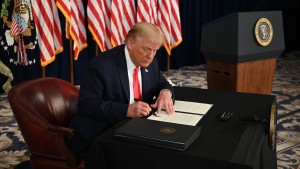 I Did It My Way

With 5 million COVID-19 cases in the US, President Trump is taking matters into his own hands.

On Saturday, Trump announced four executive actions to provide coronavirus relief. One would give unemployed workers an extra $400 in federal weekly benefits (down from the $600 that expired last month). The others: defer payroll taxes for people who make less than $100,000 a year, pause student loan payments and interest through December 31, and direct efforts to stop evictions.

Isn't this something Congress usually handles?

Yes. It's up to Congress to allocate federal spending. But it's been stuck. Democrats want a $3 trillion relief package while Senate Republicans and the White House have a $1 trillion plan. For two weeks, Democratic leaders and top Trump officials have tried to negotiate a compromise without any luck. So Trump said 'forget this' and acted alone.

And he can do that?

Some (read: mainly Dems) say no. That going around Congress was an unconstitutional overreach. But Trump's team said it was necessary to get something done and avoid the "partisan bickering and divided government." There could also be legal challenges – but the Trump admin says the Justice Department already cleared the actions.

So how would it work?

It's complicated. The new jobless benefits require states to pitch in 25%. But many are already struggling to pay their bills and might not be able to hand over the cash. The payroll tax break puts the ownership on employers and some companies may keep withholding the money. Student loans are deferred until the end of the year, but not for those whose loans are held by private lenders.

Congress and the White House could not agree on how to give millions of Americans and businesses the economic help they need right now. But Trump's attempt to solve the problem may not have a major impact. Many are still looking to the gov to pass another relief package in order for the economy to get a real boost.

Psst...Trump has been in favor of a payroll tax holiday for a while. Here's what it could mean for your income now...and way later.

Lebanon. Over the weekend, thousands of people took to the streets of Beirut, enraged after last week's deadly blast killed 154 people and left hundreds of thousands homeless. Investigators are still looking into potential negligence from the gov after a stockpile of years-old explosives detonated. The country was already reeling from an economic crisis. Now protesters are calling on gov elites to go. Several lawmakers have resigned. And Lebanon's PM said he's calling for early elections.

Bolivia. Tens of thousands of demonstrators blocked main roads to protest the country's delayed general election and its response to the coronavirus pandemic – which has killed over 3,000 people there. These protests seem reminiscent of last year's contentious election when officials went dark on sharing results for about 24 hours. Now, protesters apparently want the election to go ahead and demand a "stable" government.

Belarus. Yesterday, protests erupted after exit polls showed the longtime incumbent president winning nearly 80% of the vote. His opponent entered the race after her husband (a popular blogger) was jailed and prevented from running. She received less than 7% of the vote. Now, protesters want the president – nicknamed "Europe's last dictator" – out and are calling the results rigged. The demonstrations turned violent as police used rubber bullets and water cannons to disperse crowds. One person was reportedly killed in the protests, at least 100 people were arrested, and dozens of others were injured.

Where the drama between the US and China is playing out...

Hong Kong. Last week, the US sanctioned Hong Kong's leader Carrie Lam, and 10 other officials, barring them from doing business with the US. The sanctions are in response to the territory's new national security law which cracks down on free speech. Just yesterday, a high profile media tycoon (who's been a vocal critic of Beijing) was arrested under the law. Treasury Secretary Steven Mnuchin said the US stands with the people of Hong Kong and help "target those undermining their autonomy." But the HK gov called the sanctions "despicable." And said that the city was being used as a pawn in the US-China drama that's only gotten worse amid the coronavirus pandemic. Meanwhile, China's foreign ministry announced sanctions against American officials including Sens. Marco Rubio (R-FL) and Ted Cruz (R-TX) in a direct response to the US sanctions.

…Oh and speaking of US-China drama, HHS Secretary Alex Azar arrived in Taiwan yesterday – the most senior US official to visit the island in decades. China's condemned the trip since it still claims Taiwan as its territory.

Mauritius. Last week, the island country off the East African coast declared an environmental emergency after an estimated 1,000 tons of oil spilled from a ship into the Indian Ocean. Locals tried to contain the spill with makeshift barriers as it endangered wildlife (like baby tortoises, birds, and plants). Mauritius was already dealing with a drop in tourism – a large driver of its economy – due to COVID-19. This only adds to that stress.

Collin Morikawa. Yesterday, the golfer won the PGA Championship, making him the fourth 23-year-old to do so. The win comes a year after he joined the pros.

What can help make your wallet happy...

This presentation on budgeting. Sign up and join us on Wednesday at noon ET.