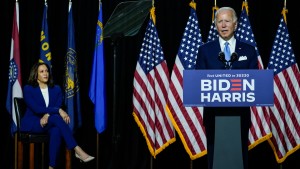 The Democratic National Convention kicks off today. But hold the balloon drop.

Because of the coronavirus?

Yes. The pandemic means the four-day event is almost entirely virtual. Delegates, politicians, entertainers, and other speakers will be tapping into the convention from all over the country, with both live and pre-recorded videos. The Dems will run their control room out of Milwaukee, WI, the original host site and a key Electoral College state. But even without the cheering crowds, the purpose of the convention remains the same: Dems will formally nominate their 2020 ticket (hi, Joe Biden and Kamala Harris), present their party platform, and make a big, public pitch about why Americans should vote blue in November.

Alright, so who are we hearing from?

Tuesday...the next generation. Get ready to hear from the "rising stars" of the Dem party including Rep. Alexandria Ocasio-Cortez (D-NY) and onetime Georgia gubernatorial candidate Stacey Abrams.

Wednesday...drumroll for Sen. Kamala Harris (D-CA), who will formally accept the vice presidential nomination. Former President Barack Obama will also take the virtual stage. And former Sec. of State Hillary Clinton will be there trying to forget how this all went down in 2016.

Thursday...oh yes it's Biden's night, when he'll accept the presidential nomination from his home state of Delaware. And don't forget performances by The Chicks, Billie Eilish, John Legend, and others that'll be sprinkled across all four nights.

What are the talking points?

The convention's theme is "Uniting America" – and the Dems are highlighting that they'll have progressives, moderates, and even some Republicans making the case for Biden. The main issues they'll focus on: how to fight the coronavirus outbreak, the economic downturn, and racial injustice.

Take your pick. The DNC will livestream on its own site, plus YouTube, Facebook, and Twitter each night from 9 to 11pm ET. If you haven't cut the cord, you can tune into the major broadcast networks starting at 10pm ET each night. And if that leaves you wanting more, cable networks are expected to have extra hours of coverage.

The DNC marks a transition from a primary season that saw 11 debates and 27 Dem candidates (yeah, remember that?) to a Biden-Harris ticket. Now, it's up to Dem leaders to fire up voters amid a once-in-a-century pandemic, high unemployment, and nationwide calls for racial justice. They'll have to make a long-lasting impression, because it's already on to the Republican National Convention next week.

Skimm More: Our podcast "Skimm This" has more about what to expect and why party conventions matter. Plus we spoke to officials on both sides of the aisle about how COVID-19 is impacting this year's plans.

The USPS. Yesterday, House Speaker Nancy Pelosi (D-CA) announced she's bringing members back from their August recess this week to vote on a bill to block the USPS from changing service in the middle of the pandemic. The move comes after Postmaster General Louis DeJoy has come under scrutiny for things like cutting overtime and reducing post office hours to save money. Which has led to backlogs of mail and warnings that voters could be disenfranchised in November as millions are expected to vote using mail-in ballots. Now, the USPS has warned nearly every state that it may not be able to deliver all those ballots on time to be counted. Also raising questions: reports of public mailboxes being removed from several states. The USPS says that's routine but that it won't remove any more until after the election. Now, the House is also calling for DeJoy to come testify. And the Postal Service's inspector general said she's investigating his policy changes.

Belarus. Yesterday, tens of thousands of anti-gov protesters rallied in the country's capital for what appeared to be the biggest protest in Belarusian history. It came after President Alexander Lukashenko rejected calls to hold a new presidential election. Last week, officials determined that Lukashenko won another term with 80% of the vote. But many believe the election was rigged. Protesters have turned out daily since, pushing for new elections. But Lukashenko has refused, calling the demonstrators "rats," claiming they're backed by foreigners, and accusing NATO of building up its military along the country's border. NATO says 'not true.'

Thailand. Yesterday, at least 10,000 people gathered in Bangkok in the country's largest rally since a 2014 coup. For the past month, students have protested nearly every day, calling for the prime minister to resign, for changes to the constitution and monarchy, and for an end to the harassment of gov critics. The protesters say the military (which has close ties to the monarchy) has too much influence in Thailand's politics. And they've questioned the disappearances of some people who've criticized both.

The Midwest. Thousands of people there are still reeling from the effects of a derecho – a widespread wind storm – last week that killed at least four people. The storm – which had 100 mph winds – destroyed businesses, homes, and millions of acres of crops in Iowa alone. It also knocked out power for hundreds of thousands of people. And a week later, tens of thousands are still waiting to get it back. Yesterday, Iowa Gov. Kim Reynolds (R) said she'd requested nearly $4 billion in federal aid to help the state recover.

Robert Trump. Over the weekend, President Trump's younger brother passed away at the age of 71. The cause of his death was unclear. The president called his brother his best friend and said he will be "greatly missed." RIP.

Who's crowning a new lead...