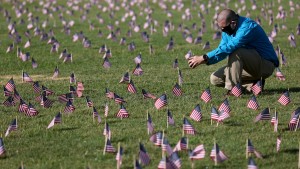 Not Just a Number

That's more than three times the number of Americans who died in the Vietnam War. And more than 65 times the number of lives lost in the 9/11 attacks. Six months ago, the CDC estimated the death toll would only get this high in a worst-case scenario and that it could be lower with mitigation efforts. But now, the virus has killed a higher share of the US population than any other wealthy country in the world. Its victims have been mostly elderly. Minority groups have also been disproportionately hit. And some health experts predict the death toll could double by 2021.

It's unclear. Some point the finger at the Trump admin for not doing more to combat the spread (read: no mask mandate or federal lockdown) despite knowing about its dangers earlier than it let on. Just this week, President Trump claimed the virus "affects virtually nobody" – a comment that shocked families of the 200,000 victims. But the president said the death toll was "a shame" – and blamed China for not getting the virus under control in its early days. The virus has also become politicized and has led to misinformation and conspiracy theories (think: anti-maskers).

But this virus is real, right?

As real as it gets. And health experts are worried that the flu season could bring new risks. Both viruses have similar symptoms (think: fever, cough, shortness of breath) and are spread from person-to-person. As the flu season approaches and everyone heads indoors, doctors are urging people to get the flu vaccine to prevent overwhelming hospitals. Some are even looking to South Africa as an example of how to contain the flu virus. Health officials credit social distancing, school closures, and wearing masks for the country practically skipping flu season.

200,000 isn't just a number. It represents parents, siblings, grandparents, and children lost to a virus this country isn't close to curbing. And while you may have been one of the lucky ones to be untouched by this pandemic, now is not the time to become complacent.

PS: Times are tough for everyone. Including for our mental health. Here are some resources to help you cope with anxiety, loss, and grief.

Who's staying in line…

Sen. Mitt Romney (R-UT). Yesterday, he said he's on board with voting for a new Supreme Court justice. Since the passing of Justice Ruth Bader Ginsburg, lawmakers have been debating when to fill her seat. Democrats argue it should be on the agenda of whoever wins the election. But Republicans are saying 'there's no time to wait.' Now, Romney (who doesn't always see eye-to-eye with President Trump) is siding with his party – all but guaranteeing that the Republican-led Senate will move forward with Trump's third appointment to the high court. The president's expected to announce his nominee in T-3 days. Here are the top contenders:

Where people are awaiting news...

Louisville, KY. Yesterday, the city's mayor declared a state of emergency ahead of a potential decision in the Breonna Taylor case. Kentucky Attorney General Daniel Cameron is expected to announce soon whether he'll charge the police officers who shot and killed Breonna Taylor – a 26-year-old Black woman – following a "no-knock" search warrant at her apartment in March. The incident fueled nationwide protests against police brutality and racial injustice. It's not clear when a decision will be made. But Louisville Mayor Greg Fischer says he wants the city to be ready for any potential "civil unrest" – and to give space to protesters while keeping everyone safe.

Tropical Storm Beta. Earlier this week, the storm (now a tropical depression) hit the Texas coast, leaving major flooding in parts of Houston. Beta is the ninth storm to make landfall in the US this year, and is expected to move over Louisiana, Arkansas, and Mississippi later this week. Also on meteorologists' radar: a "zombie" tropical storm. Yes, that's apparently a thing. Hurricane Paulette struck Bermuda last week but then weakened and avoided the US. Except, meteorologists say Paulette's now returned "back to the land of the living" and has gained strength over the Atlantic. But experts say it won't stay 'alive' much longer – and should weaken (yet again) in the next few days.

What may be less of a treat…

Halloween. This year, the CDC's saying 'no' to trick-or-treating and indoor haunted houses and costume parties because of COVID-19. To stay safe (but also very, very scared), it OK'd haunted forests since they have lots of outdoor space. Bring your mask – and maybe a flashlight.

What's 'the one where you want a seat at the table'...