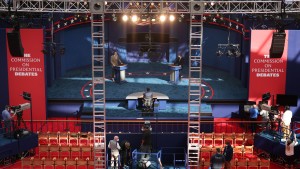 The stage is set for the first presidential debate tonight.

Adding to my cal.

Nice. Here are the deets: The Who: President Trump – who wants 'four more years' – will face off against former VP Joe Biden. Fox News anchor Chris Wallace will moderate. The When: Tonight at 9pm ET. It's slated to last 90 mins. The Where: Case Western Reserve University in Cleveland, OH. The Where to watch: All major TV networks (and streaming online). The interesting: No commercials, no giant crowds, and no handshakes (or even elbow bumps).

We would never. The What: Six specific topics (chosen by the moderator). Those are: the Trump and Biden records, the Supreme Court, COVID-19, the economy, race and violence in the US, and the integrity of the election. One topic not on the list? Trump's tax returns. While this may not be on Wallace's list of questions, it may very well be on Biden's agenda. So stay tuned as both candidates go head-to-head on the debate stage.

How will that go?

We'll see. This is Trump's first presidential debate in four years – the last time was 2016 with Hillary Clinton. And although Biden practiced his tactics on other Democrats this year, it's his first debate against a Republican candidate since 2012. They're getting ready in different ways. Trump is doing little formal prep work, opting for a 'wing it' attitude. Meanwhile, Biden's been pulling out all the flashcards and doing mock debates.

What should we expect?

Drastically different debate styles. Trump's known to be a firecracker on the stage. And isn't afraid to make quick jabs (remember this?). Biden draws from personal stories, and sometimes says things like "malarkey." But with the Oval Office up for grabs, both are expected to bring their A-game. And you can bring out your drinking game.

In 2016, the first presidential debate made history for how many people watched. Tonight will mark the 2020 candidates' first chance to go toe-to-toe and argue who has the better vision for the American people. But with only 11% of eligible voters undecided and just five weeks until Election Day, it's unclear how much of an impact the debates will have at swaying the undecideds – or changing decided voters' minds.

What's got the world mourning...

COVID-19. Yesterday, the virus's global death toll surpassed 1 million, just nine months after the first cases were reported. Around the world, more than 33 million people have been infected, and new cases show no signs of stopping. Several major cities have tightened restrictions and added safety precautions as the fear of a second wave looms. In the US, infections are up in almost half of the states. And the country accounts for a fifth of the global death toll. While scientists and pharma companies race to find a safe and effective vaccine, a global initiative is working to send 120 million rapid COVID-19 tests to low- and middle-income countries around the world – potentially saving lives. Meanwhile, health experts are urging people to stay cautious as the flu season hits the Northern Hemisphere.

Breonna Taylor's case. Yesterday, an anonymous juror took legal action to have secret grand jury transcripts from the case released to the public. Reminder: Last week, Kentucky's AG Daniel Cameron announced that no officers would be charged with killing Breonna Taylor. He also said that two of the police officers' actions were "justified" because the 26-year-old's boyfriend shot first, hitting an officer in the leg. And he said it was the grand jury's decision. But now, the juror's accusing Cameron of trying to deflect "accountability and responsibility" in the case. And the juror's lawyer reportedly claims Cameron didn't give jurors the option of indicting the officers. The AG's now agreed to release the records tomorrow, despite concerns that it could affect an ongoing federal investigation.

California's wine country. Yesterday, more than 60,000 residents of Sonoma and Napa counties were forced to evacuate as a new wildfire threatened thousands of homes and other buildings. The Glass Fire has already burned about 56 square miles and shows no signs of slowing due to heat and strong winds. And it's only one of several fires raging in the state – yesterday, authorities said three people were killed in a separate Northern California wildfire. 29 people have been killed and over 3 million acres destroyed in the state's record wildfire season.

Whose bubble you can't burst...

The Tampa Bay Lightning's. Yesterday, the NHL team defeated the Dallas Stars to win the Stanley Cup. The NHL's now the first major professional sports league in North America to crown a champ since the pandemic began.

Why we're falling for fall...

Who's given us a taste of her story...