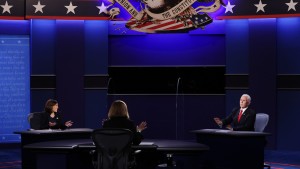 Oh, To Be A Fly On The Wall

I think I know what you're talking about.

Glad we're on the same page. Yesterday, VP Mike Pence and Democratic VP nominee Kamala Harris shared the stage for their first and only debate together...with some extra precautions. But unlike last week's disaster, we actually understood more of what the candidates had to say. Important, because the stakes were high given President Trump's coronavirus diagnosis. Here's some of what they talked about…

The coronavirus...Harris called the gov's response to the pandemic "the greatest failure of any presidential administration" in US history. With over 210,000 people in the US dead, she said that the admin covered up valuable info that could've saved lives. And that Biden would focus on things like contact tracing and free vaccines and testing for all Americans. Pence defended the admin's response (think: stopping travel from China, Operation Warp Speed). But couldn't explain how a Rose Garden event's been linked to the White House outbreak. As far as safety precautions, he said the admin "trusts the American people" to make their own choices.

The role of the VP…Both dodged the question on if they've had 'the talk' with their bosses about taking over if needed. Reminder: whoever wins would be the oldest president. Ever. When it comes to receipts (both tax and health), Harris said Biden "puts it all out there"...unlike someone else. To which Pence replied: Trump's got doctors and accountants for that.

Racial justice…Harris, the only person of color on the debate stage, said justice was not served for Breonna Taylor. She also promised criminal justice reform under a Biden admin. Pence said his "heart breaks" for Breonna Taylor – but he trusts the justice system. He believes there isn't systemic racism in America. But Harris reminded everyone that Trump told a far-right group to "stand back and stand by." Nine days ago.

The Supreme Court…Pence said it was fair game to nominate Judge Amy Coney Barrett, even if it's close to the election. Harris thinks (like the majority of Americans) that whoever wins in November should fill the Supreme Court seat. But she wouldn't say where Biden stood on court packing. On Roe v Wade, Harris said she will always support a woman's right to choose. And Pence said he's unapologetically pro-life.

The economy…Nothing new here. Pence touted the admin's record low unemployment (pre-COVID), tax cuts, and its stimulus help during the pandemic. And said 'it wasn't easy' since they inherited a struggling economy. Harris said 'take that back' – and that the recovery started under the Obama-Biden admin. Data shows she's not wrong.

Both candidates dodged questions – including on whether we'd have a peaceful transfer of power. For some reason, we're still debating whether climate change is real. And whether there's actual support behind the Green New Deal. Harris had to remind Pence that she was speaking. And we were reminded that everyone watches the news...even eighth graders (Hi, Brecklynn). There were lots of 'thank yous' and strained smiles. Pence congratulated Harris for making history with her VP nomination. And his hair looked really fly.

Last night's debate came on the heels of an especially tumultuous week for the White House and the country. And while this debate didn't go off the rails, it's unclear what effect it'll have on an election in which more than 4 million people have already cast their ballots. Meanwhile, Trump and Biden are preparing for their rematch next week. But with the president's diagnosis, it's TBD if it'll still be on.

This detainee transfer. Yesterday, two ISIS militants (El Shafee Elsheikh and Alexanda Kotey) arrived in the US to face federal charges. They are being charged in connection with kidnapping, torture, and abuse of Western hostages. The two men – who are from the UK – made up half of an ISIS group called "the Beatles." A nickname used by their hostages because of their British accents. The group was accused of beheading American journalists James Foley and Steven Sotloff to produce ISIS propaganda videos. They were captured in Syria in 2018 and have been detained by the American military in Iraq since October 2019. If convicted, they face life in prison.

Derek Chauvin. Yesterday, the former Minneapolis police officer – who was charged in the killing of George Floyd – walked out of prison after posting a conditional $1 million bond. Reminder: Chauvin faces second- and third-degree murder (and second-degree manslaughter) charges for pinning his knee on Floyd's neck for at least eight minutes back in May, killing him. He could spend up to 40 years in prison if convicted. He's expected to go on trial (along with the other three officers involved) in March 2021.

Who's in their element…

These scientists. Yesterday, Emmanuelle Charpentier and Jennifer Doudna were awarded the Nobel Prize in Chemistry for their creation of a gene-editing tool called CRISPR-Cas9. It basically acts as "genetic scissors" that can cut DNA at a specific location – and has been used in experiments to treat certain conditions like sickle cell disease. This is the first time a pair of women have jointly won a Nobel Prize in Chemistry. Charpentier said she hopes this win sends a message to young girls who want to "follow the path of science."

The "Breakfast of Champions."