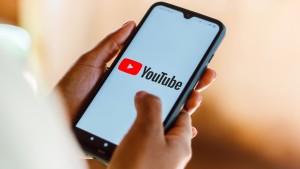 Social media companies are cracking down on QAnon.

QAnon. It's a far-right conspiracy-theory group that emerged on Internet message boards shortly after President Trump was elected. The group believes (with zero basis) that Democrats, celebrities, and other high-profile figures are part of a cabal of Satan-worshiping pedophiles. And that they run a global child sex-trafficking ring. Among the accused: Hillary Clinton, Tom Hanks, Pope Francis, Oprah Winfrey, and many more. QAnon supporters also believe Trump is waging a war against this cabal, also referred to as the "Deep State."

Where is this even coming from?

It all started when an anonymous user – known only by the name of "Q" – posted cryptic messages on 4chan (an online message board) alleging the existence of this cabal. Q claimed to be a high-ranking government official with a "Q clearance" access to top-secret information. And things spiraled out of control. QAnon supporters now believe in an array of unproven theories: that Bill Gates is using the coronavirus so he can inject people with a microchip hidden in a vaccine, that the cabal is made up of Democrats who drink children's blood, and that they all will be arrested and punished during an event called "The Storm" – led by Trump.

Nobody believes this, right?

Um, you'd think so. But during the pandemic, their baseless content has exploded online. In just the last four months, membership to QAnon groups on Facebook reportedly rose 700% (they now have millions of members). And it's not just happening online. Some QAnon believers have shown up at Trump rallies, donning Q merch. But they're not always harmless. Some have been linked to violent incidents, like "pizzagate" in 2016 (which some believe was the precursor to QAnon) as well as things like trespassing, armed standoffs, and even murder. Despite all this, they're also getting some high-profile support.

Some estimates say over a dozen 2020 candidates are QAnon believers. That includes Georgia Republican Marjorie Taylor Greene. In August, she won the primary runoff for Georgia's 14th Congressional District, and is likely to win in November. The president congratulated Greene on her primary win, and has also praised the theory's supporters. Yesterday, NBC's Savannah Guthrie pressed Trump on sharing conspiracy theories linked to the group on Twitter "like someone's crazy uncle." But he defended his retweets and refused to denounce the group. The FBI, on the other hand, says QAnon poses a potential domestic terrorism threat. And after years of leaving QAnon largely unchecked on their platforms, social media companies like Facebook, Twitter, and now YouTube want to put an end to its fake news.

Social media companies face a lot of heat for how they censor what's posted on their platforms (see: backlash over Facebook's and Twitter's actions on an unverified story about Hunter Biden). But some fear these rampant conspiracy theories could fuel violence after the election (particularly if it's contested) and Big Tech is scrambling to stop it.

A unique head-to-head matchup between the presidential candidates had Americans flipping back-and-forth between TV channels (for the first time in forever). After President Trump said 'no thanks' to a virtual presidential debate (following his COVID-19 diagnosis), he and former VP Joe Biden decided 'town halls it is.' They each appeared on different networks, in different cities, at the same time. Here's how that went down:

The ABCs on Biden…He called for a "national standard" to fight the pandemic – including a potential vaccine mandate. But TBD on how to enforce it. He dodged a question on expanding the Supreme Court (aka court packing). And acknowledged that elements of the 1994 crime bill – widely blamed for an increase in the mass incarceration of people of color – were a mistake. He said he won't ban fracking, but would reverse the Trump admin's ban on transgender people serving in the military.

The NBCs on Trump...He argued the US is "rounding the corner" on the pandemic as cases rise higher. And notably committed to a peaceful transfer of power, but made unsubstantiated claims about voter fraud. He promised to protect people with preexisting conditions – but didn't say how he'd replace Obamacare. And said he "probably" owes money to a foreign bank and "probably" took a coronavirus test the day of the last presidential debate (which was required).

Psst...here's how some of the candidates' policies could affect your wallet.

The Senate Judiciary Committee. Yesterday, it wrapped up Judge Amy Coney Barrett's Supreme Court confirmation hearings. Over the last four days, senators talked (a lot), asked Barrett all the questions, and heard from outside witnesses. Including powerful testimony from Laura Wolk, the first blind woman to clerk on the Supreme Court and a former law student of Barrett's. Wolk described how Barrett got her the special tech she needed for classes – helping her succeed in school and leading to her clerkship. Meanwhile, Democrats' witnesses testified about how Barrett's confirmation could threaten things like health care, abortion, and voting rights. But that's expected to have little impact – Barrett's nomination is all but guaranteed to get the committee's approval next week before it goes to the Senate floor.

What's putting its foot down...

The European Union and the UK. Yesterday, they announced sanctions against six high-ranking Russian officials for allegedly trying to assassinate opposition leader Alexei Navalny. Reminder: Navalny was poisoned back in August with a nerve agent (aka an illegal chemical weapon) and is still recovering. Russia denied any involvement, but the EU called the poisoning a "serious breach of international law." (And it's not the first time Russia's been accused of this.) Now, the six men – who were part of the Defense Ministry, a spy agency, and the Kremlin – are banned from traveling to the EU and their assets will be frozen in Europe. Russia has promised to retaliate against the sanctions.

Falling enrollment at US colleges. A new study shows the number of first-year students dropped 16% at US colleges and universities because of the coronavirus pandemic. It's down nearly 23% at community colleges. And the largest drop was among American Indian and Black students – communities disproportionately impacted by COVID-19. The reasons for not enrolling apparently ranged from financial strain, to travel concerns, to not wanting remote classes. And the study's executive director fears that some of these students may not pursue a higher education in the future.