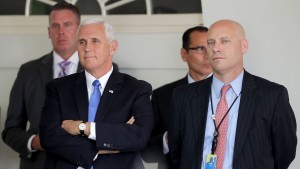 The US is breaking COVID-19 records again.

Last Friday, the US reported more than 85,000 new cases of COVID-19 – the highest daily record since the pandemic began. The next day, that number was over 83,000 – the second-highest on record. And nearly 10,000 more cases than the previous daily high from the summer. Hospitalizations are also up, and so is the fear of hospitals being overwhelmed. Last month, the WHO said the virus is "not going away" and experts worry things could get worse as the weather gets colder and people head indoors. But something else is also raising some concerns.

Another outbreak at the White House. This time, on Vice President Mike Pence's team. At least five members of his inner circle have tested positive for COVID-19, including his chief of staff Marc Short and his adviser Marty Obst. Despite being in close contact with them, Pence (who's tested negative) will forgo quarantine to keep campaigning – with the OK from WH physicians. Since the VP leads the WH's coronavirus task force, all this is raising questions about the White House's safety measures...and transparency.

Or lack thereof. WH chief of staff Mark Meadows tried to prevent the news of the outbreak from going public because officials don't think sharing "personal information" is something they should do. And when Meadows was asked about the spread of the virus, he said the gov wasn't "going to control the pandemic." (Experts say 'it's sure worth a try.' And masks help.) Instead, he said the admin could only try to control vaccines and therapeutics.

With more than 8 million cases nationwide and over 220,000 deaths, leaders seem at odds on how to curb this virus. On the one hand, President Trump claims it is "rounding the corner." And on the other, we're hearing this virus seems uncontrollable. Now, Americans may be left with more questions than answers.

It's not all doom and gloom. There's something else (way more positive) breaking records in the US: election mail. The US Postal Service has processed over 500 million pieces of election mail so far – including 100 million ballots. That's a 162% jump from the 2016 election. (Cue: air five).

Stamp of approval: Earlier this year, there were fears that operational changes at the USPS (think: no overtime, leaving mail behind, and removing blue mailboxes) would delay election mail. Especially as requests for mail-in ballots surged during the pandemic. But with the changes reversed, the president of the American Postal Workers Union said postal workers "are moving heaven and Earth" to get election mail delivered on time – and so far, so good. The USPS is treating completed ballots as "First-Class Mail" and one estimate shows nearly 40 million of them have already been submitted. Workers will also take "extraordinary measures" (think: extra trips between the post offices and board of elections) to ensure no mail is left behind.

Voting by mail? Be sure to check your state's 'postmark by' deadline.

Who's likely getting a new name plate…

Judge Amy Coney Barrett. The Senate is expected to confirm her to the Supreme Court in a vote later today. (52 senators have already said they're on board.) The vote comes exactly one month after President Trump nominated Barrett to replace the late Justice Ruth Bader Ginsburg. Barrett's likely confirmation will give the Supreme Court a solid conservative majority. Democrats warn that means she could help strike down the Affordable Care Act – and even Roe v Wade. Republicans say she's the right fit for the court. And with about one week until the election, those arguments could motivate voters – on both sides of the aisle.

Marcellis Stinnette. Last week, the Black 19-year-old was shot and killed by police in the Chicago suburb of Waukegan, Illinois. Police said they were investigating a suspicious vehicle which then fled the area. A second officer soon spotted the car nearby. Authorities said as he approached it, the car began to reverse toward him and the officer fired into it. Stinnette, who was in the passenger seat, was killed. His girlfriend Tafara Williams, who was driving, is now in the hospital recovering from injuries. On Friday, the Waukegan Police Dept announced the officer involved was fired for "multiple policy and procedure violations." Illinois State Police are investigating the shooting with help from the FBI.

Who's still trying to flatten the curve...

Italy and Spain. Yesterday, the European countries hardest hit by COVID-19's first wave issued sweeping new measures as infections hit record highs – again. Starting today, Italian bars and restaurants have to close by 6pm. Theaters, pools, and gyms will close for at least a month, but some schools and workplaces will stay open. In Spain, the gov declared a state of emergency, issued a nationwide curfew, and banned meetings of more than six people.

America's soon-to-be first Black cardinal. Yesterday, Pope Francis announced he'd selected Archbishop Wilton Gregory to become a cardinal, one of the highest-ranking officials in the Catholic Church. Gregory's currently archbishop of Washington, DC. The appointment becomes official at a ceremony next month at the Vatican.

When a mistake makes you a millionaire...

Maybe the price to pay was right.