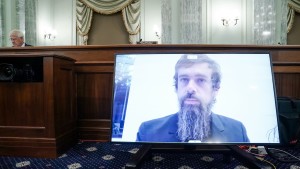 With only days left until the election, Big Tech CEOs got a talking-to.

Great. Yesterday, the chief exec officers of Twitter, Facebook, and Google appeared before the Senate Commerce Committee (virtually). They were supposed to discuss Section 230 of the Communications Decency Act, a 1996 law that protects internet companies from being held liable for what their users post. (This is a big deal because that law gives these companies the power to control what appears on their platforms.) But with Nov 3 around the corner, the hearing turned into a fiery session that displayed lawmakers' concerns around Big Tech.

Tell me how they really feel.

Republican senators accused the companies of anti-conservative bias, pointing the finger at Facebook and Twitter for limiting the distribution of an unverified New York Post story on Hunter Biden. And not treating Holocaust deniers with the same scrutiny. Sen. Ted Cruz (R-TX) went off on Twitter CEO Jack Dorsey, accusing his company of acting like a "Democratic Super PAC." Dem senators also criticized the companies' inaction around misinformation and violent content on their platforms. And even blamed them for their role in the rise of hate crimes and white nationalism in the US. But some called the hearing a "sham," and claimed it was just an outlet for the GOP to pressure the CEOs to ease their restrictions.

What did the Big Tech guys say?

They shot down the senators' accusations. And pointed to their reforms tackling misinformation in this year's election, including:

Twitter...It banned political ads in 2019. It has been flagging misleading posts with fact-checking and warning labels. As for the accusations of bias, Dorsey denied his company favored Democrats but acknowledged it could have handled the Hunter Biden situation better.

Facebook…It has taken an array of measures following accusations it didn't do enough to prevent Russian election interference in 2016. The company has started labeling posts with misinformation, has provided daily voting info at the top of its Facebook and Instagram pages, and has stopped running new political ads on its platforms...for now.

Google...CEO Sundar Pichai said any political bias "would be contrary" to their mission and interests. The company has said it's stopping election ads on its platforms (including YouTube) after the polls close. And said it would stop autocomplete search suggestions about the election results.

What started as a debate around regulating Big Tech ended with petty insults, fiery jabs, and a whole lot of nothing. With just five days until the election, there's a lot of pressure on Big Tech to crack down on misinformation...and seemingly no consensus on how to properly regulate it.

Over the past week, more than half a million people tested positive for COVID-19 in the US. At least 37 states have seen a rise in hospitalizations. And health experts say the US is reaching a critical point.

We spoke to Democratic VP candidate Kamala Harris about how a Biden-Harris administration would tackle the pandemic.

Q: If elected, what is the first thing you and former VP Joe Biden would do to stop the spread of COVID-19?

A: Joe Biden and I will, as one of our highest and first orders of priority, get a rein on COVID...We will have and implement a national plan for testing, for treatment, for contact tracing, and – God willing, as soon as we get a safe vaccine – for distribution of the vaccine. I'll also tell you part of Joe's approach and my approach is to recognize that the pandemic really highlighted long standing disparities that just got worse...So we also, as part of our plan for implementation, have a task force that is dealing with the racial disparities piece of it to make sure that the resources go in those communities hit the hardest and with the greatest needs, so that we have equitable outcomes.

Listen to the full interview here.

PS: theSkimm is a nonpartisan organization. An interview request was also sent to VP Mike Pence.

France. Today, French police said a woman was beheaded and two other people were reportedly killed during a knife attack at a church in Nice. Several others have been injured. The attacker has been detained and the city's mayor is calling the attack an act of terrorism. This comes as France is still recovering from the beheading of French teacher Samuel Paty in Paris earlier this month. France's anti-terror prosecutor's office has reportedly opened an investigation into the attack. This story is developing.

Ransomware attacks. Yesterday, the FBI and two federal agencies warned of an "imminent cybercrime threat" to US hospitals and health care providers. They said several hospitals across the country have already been hit, reportedly in Oregon, California, and New York. Federal officials say the cybercriminals are unleashing malicious software to lock up hospitals' information systems until they pay up. (Hence ransomware.) Similar attacks abroad have impacted patient care and even resulted in one death. A cybersecurity official is calling it the "most significant cyber security threat" that's been seen in the US. And it comes as COVID-19 cases and hospitalizations are up in many states. The gov is continuing to investigate.

Where govs are putting health first...

Germany and France. Yesterday, the two countries announced new lockdown restrictions as coronavirus cases rose in Europe. Unlike the first lockdown, schools will stay open. And family members will be able to visit loved ones at care facilities. But all non-essential businesses will be closed until at least Dec 1. The countries' leaders said they needed to take swift action to prevent overwhelming hospitals. French President Emmanuel Macron reportedly said this new wave "will be stronger and deadlier" than the first.

SCOTUS. Yesterday, it approved mail-in ballot extensions in Pennsylvania and North Carolina. It's a win for Democrats in two key battleground states who said they needed extra days after Nov 3 to count votes because of the pandemic. Republicans opposed the decision and hoped newly confirmed Justice Amy Coney Barrett would have sided with them. But Justice Barrett didn't participate in the cases, saying she didn't have time to fully review them. (Whatever happened to orientation?) The decision came the same week SCOTUS declined a similar extension in Wisconsin.

Hurricane Zeta. Yesterday, the Category 2 storm hit Louisiana, knocking out power to hundreds of thousands of people and destroying buildings. At least one person was killed. It's the latest of a record number of storms and hurricanes to hit the state this year. Louisiana Governor John Bel Edwards (D) activated the National Guard and said more than 5,000 linemen are ready to begin recovery and power restoration efforts. Zeta is also impacting parts of Mississippi and Alabama.

Scare them with these sharks.