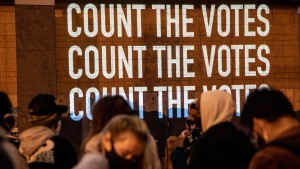 Patience is a Virtue

Well...we don't know the winner of the presidential election yet.

Wasn't that to be expected?

Yes, but it didn't make it any less stressful. Both campaigns had hoped for a landslide win. That didn't happen. In fact, the electoral votes are tiiiight. As it currently stands, former Vice President Joe Biden has 227 electoral votes, while incumbent President Donald Trump has 213. Reminder: a candidate needs at least 270 electoral votes to win the presidential race. Both candidates had support in many of the states they were expecting to win. Biden won several Northeastern and coastal states. Trump kept his stronghold in the South. And even though we don't have a winner yet, there were a couple of key wins of the night:

Florida (29 electoral votes): A Trump win. The Sunshine State was a main focus on the campaign trail, especially since no Republican president in the last several decades has ever reached the White House without winning it.

Texas (38 electoral votes): Another Trump win. Since 1980, it's been a guaranteed win for Republican presidents and candidates. But some view Texas as a new battleground state as its demographics shift (think: younger and more diverse voters). Turns out, it wasn't much of a battleground last night.

So what are we still waiting on?

Results from at least eight states. Part of the wait is due to these races being too close to call. And part of it is due to how they count mail-in ballots. Meaning, we might not have results for days. Here's what to watch out for:

Arizona (11 electoral votes): A Democratic presidential candidate has not won Arizona since 1996. But this year, things could be different. That's partially due to the state's growing young Latino population, which as a whole, tends to lean to the left.

North Carolina (15 electoral votes): Trump won the state in 2016 and Republicans hope to keep it that way. But the state is largely white with a mix of rural and urban communities. And former President Barack Obama proved in 2008 that the state can sometimes turn blue.

Georgia (16 electoral votes): The state has voted for Republican presidential candidates for over two decades. But similarly to Texas, its population is getting increasingly more diverse – which is giving Democrats hope.

Nevada (6 electoral votes): Of the swing states, the Silver State really swings. It's gone back and forth on supporting Republican and Democratic presidential candidates. Recently, it's voted blue. And Republicans are trying to win it back. It could come down to the state's Latino voters.

The (former) "blue wall": As in Michigan (16 electoral votes), Wisconsin (10 electoral votes), and Pennsylvania (20 electoral votes). They're the Northern industrial states that voted blue over the last two decades...until Trump won each state by small margins in 2016. Biden is trying to build the wall back up. And at this point, he'll probably need to in order to win. Wisconsin is expected to have results early this morning. But we may have to wait on Pennsylvania. It can count mail-in ballots up to three days after Election Day (as long as they're postmarked by Nov 3).

So when should we expect results?

It's unclear. Results could trickle in over the next few days and give either Biden or Trump the win. Meanwhile, early this morning, Trump falsely declared victory in several states that are too close to call. He claimed that the state of the election is a "fraud on the American public" and that he plans to go to the Supreme Court to stop ballot-counting. While not new for the president, these inflammatory claims are adding to fears that he may not commit to a peaceful transfer of power.

OK, my head is spinning.

Let's talk about the other major races then: Dems are expected to keep the House, although dozens of seats haven't been called. The Senate – which Republicans have held since 2015 – is still too early to call.

2020 has been a lot. And the uncertainty around the election and its repercussions has only added to it. Unfortunately, that uncertainty is going to last a bit longer while we wait for the final states to count their votes. So remember to pause, breathe, and be patient.

While most Americans were glued to the presidential race last night, many other down-ballot races were taking place. Here's a look at some of the candidates who got to celebrate...

The seat keepers: Senate Majority Leader Mitch McConnell (R-KY) won a seventh term and continues his legacy as one of the biggest power-players in DC. Sen. Lindsey Graham (R-SC) got to keep his seat too. As for Dems, the four members of "The Squad" – Reps. Ilhan Omar (MN), Alexandria Ocasio-Cortez (NY), Ayanna Pressley (MA), and Rashida Tlaib (MI) – are staying in DC.

The new kids on the block: Democrat Mark Kelly is swapping his spacesuit for an actual suit after beating incumbent Martha McSally (R-AZ). Former CO Gov. John Hickenlooper flipped Colorado's Senate seat from red to blue. Tommy Tuberville is getting a new office after beating incumbent Democrat Doug Jones (D-AL). QAnon supporter and Republican Marjorie Taylor Greene is bringing her conspiracies to Capitol Hill. Democrat Sarah McBride becomes the first transgender state senator in US history. And the House will soon have its youngest member of Congress at age 25 (hi, Madison Cawthorn).

The ballot measures: New Jersey and Arizona legalized weed. California parolees will have their voting rights restored. Oregon voted to decriminalize hard drugs. And Mississippians voted to say 'hi' to magnolias and 'bye' to their controversial state flag.

Where people are still on high alert...

Europe. Earlier this week, at least four people were killed and 22 others were injured in a terrorist attack in Vienna, Austria. The attack – which ISIS has claimed responsibility for – came hours before the country went into its second COVID-19 lockdown. At least one suspected shooter was killed by police and authorities have also arrested 14 people as they search for possible accomplices. This came days after deadly stabbings in France. Fearing another wave of attacks, the UK gov has raised its terror threat level to "severe" – indicating an attack is "highly likely."

Kyle Rittenhouse. Earlier this week, the 17-year-old who was charged with killing two people and wounding a third at protests in Kenosha, WI, in August, appeared in court. The protests were sparked by the police shooting of Jacob Blake, who was left paralyzed from the waist down. Rittenhouse was arrested the day after the shooting at his home in Illinois. But was extradited to Wisconsin last week to face trial there. His lawyers say Rittenhouse was acting in self-defense and argued that extradition violates his constitutional rights. The court set his bail at $2 million – believing he's a flight risk – and set a preliminary hearing date for next month. If convicted, he faces life in prison.

Who's not signing on the dotted line just yet…

Poland. Yesterday, the country's gov decided to delay the implementation of a controversial court ruling on abortions. Reminder: Last month, a court decided that abortion is unconstitutional in instances where a fetus is diagnosed with a serious and irreversible birth defect. This would've limited nearly 96% of once legal abortions, and people in Poland were outraged. They took to the streets for weeks in the largest demonstrations since the late 1980s. Now, the prime minister's office is saying leaders are discussing the ruling and exploring a new proposal.

Who's talking about their first time…