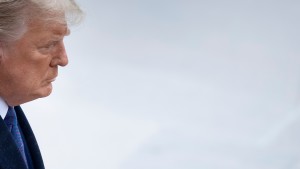 Where Are My Onboarding Docs?

Experts warn a country without a clear transition of power could pose serious risks.

Media outlets declared Joe Biden the winner over a week ago, after a decisive lead in key states. Normally, a president concedes by this point and the federal gov starts handing over the keys to the next admin. But 2020 is full of surprises, isn't it? The Trump admin is refusing to recognize Biden as the projected winner. Instead, it's been taking unsubstantiated claims of voter fraud to the courts. Meanwhile it's been grinding the transition – a pillar of democracy – to a halt.

Why is it so important?

The presidential transition separates the US from authoritarian govs. It helps establish a new government, empowers new appointees, and allows the new president and his admin to restructure policy as promised on the campaign trail. No modern presidential election has gone on without a peaceful transfer of power (even the drawn-out, contested election in 2000 that sought SCOTUS's help). Now, experts are warning that there could be serious consequences if the Trump admin doesn't get on board with the Biden onboarding – especially for the following:

COVID-19...Yesterday, the US surpassed 11 million coronavirus cases. And the number continues to rise as nearly every state sees a jump in infections. On average, over 1,000 Americans are reportedly dying from the virus every day – a 50% rise from the past month. Dr. Anthony Fauci's encouraging a smooth transition, saying it "would be better" for the US if the Trump admin worked with Biden's team to address the pandemic. Biden announced his own intended COVID-19 task force and his advisers are expected to meet with vaccine manufacturers within days. But experts are warning a delayed handoff could be especially problematic during a public health crisis.

National security...Four years ago, Trump received his first intelligence briefing soon after winning the election. Now, it seems like his team is blocking Biden from getting the intel – despite some GOP lawmakers urging Trump to begin the transition. With Biden unable to access the security briefings, he could begin his term with a lot to catch up on. This all comes as Trump fired Defense Secretary Mark Esper last week. And some (think: former officials, Dem leaders, and Biden's advisers) are warning that a gap is putting Americans' national security at risk. History may agree. Back in 2000, the contested election delayed George W Bush's (and his national security team's) transition. The 9/11 Commission Report found that the delay left the Bush admin less prepared to deal with the September 11, 2001, terror attacks.

The inauguration is 65 days away and America isn't seeing a clear transfer of power. Without it, experts warn Americans' health and safety could be at risk.

Where there's a hole in the government...

Peru. Yesterday, the country's interim president, Manuel Merino, resigned after days of protests calling for him to step down. Merino took up the position last week after Congress ousted then-President Martín Vizcarra over corruption accusations. But Peruvians – who strongly supported Vizcarra – saw Congress's move as a power grab and took to the streets in anger. At least two people died, more than 110 were injured, and dozens of others went missing during clashes with police that lasted nearly a week. Now, Merino's calling for "peace and unity" as the country gets ready for a new interim president ahead of the April presidential election.

DACA. Over the weekend, a federal judge invalidated restrictions on the Obama-era program that protects over 640,000 young undocumented immigrants from being deported. In July, acting Secretary of Homeland Security Chad Wolf issued a memo saying that new DACA applications wouldn't be accepted. And that renewals would be limited to one year, not two. The restrictions came after the Supreme Court blocked the Trump admin from ending the program. Now, the fed judge argues that Wolf was unlawfully appointed as acting secretary because he didn't follow the rules of succession. And because of that, Wolf's memo is worthless. Immigration rights groups hailed the decision as a victory for DACA recipients. Meanwhile, a Department of Homeland Security spokesperson denounced the ruling and said officials are exploring their options to continue with a review of DACA.

Asia-Pacific countries. Yesterday, 15 – including China, Japan, South Korea, Australia, and New Zealand – signed the world's biggest trade deal. It's called the Regional Comprehensive Economic Partnership (RCEP) and it's been eight years in the making. It covers nearly a third of the global economy (larger than the USMCA and the European Union). The deal will make it easier to import and export throughout the region without high tariffs – and supporters say it could help the economies recover amid the pandemic. But critics are worried it could give China even more of an economic leg up in the region.

Who's hitting it out of the (ball)park...

Kim Ng. Last week, the Miami Marlins hired Ng as their new general manager – making her MLB's first female GM. Ng was the league's senior VP of baseball operations for the past nine years, and had previously worked for the New York Yankees and the Los Angeles Dodgers. She said this new job is "the honor" of her career.

What to wear on your virtual Hinge date...