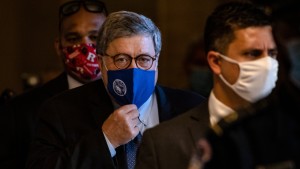 Members of the Trump administration are singing a new tune.

Voter fraud. Or the lack thereof. Yesterday, Attorney General William Barr claimed the Justice Department had not found any evidence of widespread voter fraud that would change the election's outcome. Important because Barr is one of President Trump's closest allies. And this new development goes directly against Trump's claims of a "rigged" election. Last month, Barr instructed prosecutors to dig into any "substantial allegations" of voter irregularities. This new claim would indicate that nothing of note came from that. No word from the president on all this. But his personal lawyer Rudy Giuliani says the DOJ hasn't conducted "any semblance" of an investigation. And that his team plans to continue the "pursuit of the truth." Meaning: expect more lawsuits.

How many is that now?

A lot. Trump's team and other GOP lawmakers filed dozens of lawsuits in battleground states across the US (see: PA, MI, GA, NV, AZ, and WI). They've mostly been dismissed, settled, or withdrawn. But that's not stopping the Trump team from making 'time for court' a daily cal event. Just yesterday, his campaign filed a new lawsuit in Wisconsin, hoping to block the certification of election votes. They claim that some absentee ballots were illegally cast because voters did not submit a separate written application. It's seen as a last-ditch effort by the Trump team to overturn the election results before December 14, when members of the Electoral College cast their ballots.

It's been 29 days since Election Day and President Trump has yet to accept the results. Many on his team supported his claims of fraud initially. But as the days go on, key members of his administration are coming out to say there's just no evidence to back them up.

Who's moving ahead in the fight against COVID-19…

Britain. Today, it approved emergency use for the coronavirus vaccine developed by Pfizer and BioNTech. The move makes Britain the first Western country to give a vaccine the green light, ahead of the US. (Reminder: Russia and China have already approved vaccines without waiting for final trial results.) And came after Pfizer said its vaccine is 95% effective in preventing COVID-19. The UK gov has ordered 40 million doses of Pfizer's vaccine, enough for 20 million people. Now with approval, the gov says it'll begin distribution next week to high-risk groups, including nursing home residents. Prime Minister Boris Johnson said the vaccine will allow the country "to reclaim our lives and get the economy moving again."

This CDC advisory panel. Yesterday, it voted on who should get first dibs on a potential COVID-19 vaccine. In a 13-1 decision, it recommended health care workers and long-term care facility residents should get the top spot. And hinted that essential workers should be next in line. But state govs still have the final say on distribution and will likely need to make a call later this month – when states could start receiving the first doses of Pfizer and Moderna's vaccines for wider use.

These lawmakers. Yesterday, a group of bipartisan lawmakers rolled out a $908 billion coronavirus relief plan. It includes billions of dollars in funding to local and state governments, small business relief, vaccine distribution, and support for unemployed Americans. Not included: another stimulus check. Some Americans have been waiting months for another round of federal financial help. But Congress has remained deadlocked on several proposals. While some lawmakers have thrown their support behind this bipartisan effort, Senate Majority Leader Mitch McConnell (R-KY) is saying 'back to the drawing board.' Instead, he's working on a separate bill with the Trump admin that he says the president is more likely to sign.

What had many pressing 'add to cart'…

Deals on deals. According to early data, shoppers spent a collective $9 billion online on Black Friday. And just when you thought your cart was full enough, Cyber Monday said 'hold my beer.' American shoppers spent a record $10.8 billion that day – an all-time high, according to Adobe Analytics. Giving Tuesday felt the spending love too, especially in donations to pandemic-related nonprofits. Well done, team.

Psst…didn't finish your holiday shopping? We Skimm'd tips for buying gifts on a budget.

Who's inspiring all of us...

Elliot Page. Yesterday, the Oscar-nominated "Juno" actor came out as a non-binary, transgender person. Page said he "can't begin to express how remarkable" it is to finally be his true self. And took a moment to reach out to the transgender community, letting them know he would do "everything" he can to help change a world where they are harassed.

What's giving us a gift before the holidays...