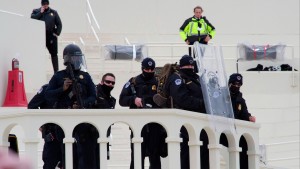 This week's attack on the Capitol is highlighting discrepancies in policing.

Since the country's founding, the First Amendment has protected Americans' right to peacefully assemble. But history has shown that not all demonstrations are perceived equally. Those from the right have often been viewed as patriotic while those from the left are seen as a challenge to the status quo. The last year has shown us that they're not policed equally, either. Let's show you what we mean...

Black Lives Matter protests: After the killing of George Floyd, thousands of people from all walks of life took to the streets to demand justice. While largely peaceful (by one count, 93% of protests), many were met with the very same thing they were protesting against: police brutality. They were tear-gassed, shot with rubber bullets, hit with batons, shoved into unmarked vans, plowed by police vehicles, and over 14,000 people across 49 cities were arrested. In DC, peaceful protesters were violently cleared from Lafayette Square for President Trump's photo-op. That day, 289 people were arrested. Trump has called protesters "thugs" and warned, "when the looting starts, the shooting starts." AG William Barr reportedly even sought charges of sedition.

Capitol Hill riots: During Congress' certification of election results, a mob of pro-Trump supporters – including white nationalists – stormed the Capitol. They scaled walls, shattered windows, broke into federal offices, took over the Senate floor, stole furniture, and carried the Confederate flag. While violent, many were met with a starkly different police response. Videos appeared to show Capitol Police removing barriers keeping protesters from the Capitol. In one, an officer can be seen taking a selfie with a protester. A noose was hung near the Capitol building and explosives were found nearby – at the RNC and DNC headquarters. That day, only 68 people were arrested. The president, who had urged his supporters to go to the Capitol, later told the rioters to go home and that "we love you, you're very special."

I see what you mean.

Right. And while one set of protests at times devolved into looting, property destruction, and defacing or toppling monuments, the other was a planned attack: the invasion and violent takeover of the US Capitol. Many were outraged that it took so long to deploy the National Guard to the Capitol, compared to the deployment against Black Lives Matter protesters in June. The Defense Dept says it had approved an earlier request for guardsmen to help with traffic control, but that the request for additional help with the Capitol came at the last minute. Worth noting: the National Guard was used in multiple protests over the summer, and police were in riot gear. Meanwhile, Capitol Police are being called out for how unprepared they were to safeguard the country's lawmakers.

The Defense Department had reportedly asked Capitol Police if they need the National Guard three days before the protests. But police repeatedly denied help. Capitol Police Chief Steven Sund – who announced he was resigning yesterday – hasn't given an explanation. The news came as lawmakers from both parties pledged to investigate law enforcement's actions during the siege. And hours before it was confirmed that one officer died of sustained injuries. Officer Brian D. Sicknick served nearly two decades with Capitol Police before being injured in the line of duty on Wednesday. His death is being mourned by lawmakers across the aisle.

The attack on the US Capitol unveiled the loose cracks in our democracy. But it also exposed what VP-elect Kamala Harris called "two systems of justice" in our country – where race may dictate whether one's right to protest is respected.

America is trying to heal from all of 2020 and the first week of 2021. And Inauguration Day is only 12 days away. After the Capitol Attack, some are wondering what's next for...

President Trump…Last night, for the first time, Trump conceded to President-elect Joe Biden – 65 days after the election. And said his focus is now on an "orderly and seamless transition of power." But he's still facing growing calls for impeachment (again). And dozens of House and Senate Democrats want the 25th Amendment to be invoked, which would deem Trump unable to execute his role and give VP Mike Pence the promotion to acting president. This could be done if Pence and a majority of Trump's Cabinet (or of members of Congress) agree to it. But some social media outlets are already on it.

The Republican Party...It seems to be experiencing a reckoning after years in which many stand accused of enabling Trump's mistreatment of protesters and allegations of election fraud. At least eight Trump admin officials have resigned amid the effects of the Capitol attack, including Education Secretary Betsy DeVos, Transportation Secretary Elaine Chao, and former WH chief of staff Mick Mulvaney. And Wednesday's chaos may have permanently alienated center-right voters.

The US. Earlier this week, the country reached a grim new milestone as it recorded over 4,000 deaths in 24 hours – reportedly the worst figure in the world. And US hospitalizations reached more than 132,000. Health officials say Arizona has become the global hotspot as the governor resists restrictions. In LA County, more than 20% of tests are coming back positive as some CA hospitals are already overwhelmed. Those two states and Rhode Island are estimated to have more cases per capita than any other country in the world. It comes as Americans are being asked to be patient with the country's vaccination efforts against a virus that's killed over 360,000 people in the US.

Brazil. Yesterday, researchers there said that a coronavirus vaccine made by China has shown to be 78% effective against the virus. Unlike Moderna's and Pfizer's vaccines that use mRNA, CoronaVac is more traditional and uses inactivated coronavirus to trigger the body to develop antibodies. While there are concerns about transparency in the vaccine trials, Brazil (along with Indonesia) could begin rolling it out later this month. And the vaccine could open the door for lower-income countries to get a vaccine option since wealthier countries have essentially cleared out the shelves.

Who's getting a welcome packet…

Rhode Island Gov. Gina Raimondo (D). President-elect Joe Biden tapped the governor and former venture capitalist for Commerce secretary. If confirmed, Raimondo will bring her pro-business experience (things like cutting taxes, eliminating regulations) to an agency that's been charged with keeping the US competitive with China.

Isabel Guzman. The president-elect has tapped the former Obama official to lead the Small Business Administration. If confirmed, Guzman would be the first Latina in Biden's cabinet. And would be responsible for overseeing the massive Paycheck Protection Program amid economic fallout from the pandemic.

What's got us doing a double take...

This new study. Yesterday, researchers said that identical twins, though they look alike, are not perfect clones. And that they actually have genetic differences. When you have to share everything else, it might be nice to know you don't share the same exact DNA.