The Big Tech companies: Their influence and controversy | theSkimm
Subscribe 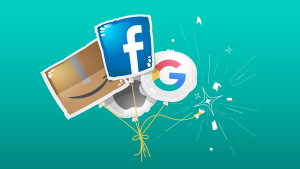 Regulating the tech industry is the talk of Capitol Hill. The question is how to do it.

Big Tech often refers to four tech companies that dominate our lives: Apple, Amazon, Google, and Facebook. Sometimes Microsoft is thrown in with the group. These tech companies are some of the most valuable companies in the US.

Fan base: According to the company, there are 1.4 billion active Apple devices out there in the world. Everything from iPhones to Apple Watches. Skimm Notes gives a deep dive on its CEO Tim Cook.

Fan base: Bezos holds Amazon stats close to the vest. But last year he said that there are more than 100 million Prime members in the US. Skimm Notes gives a deep dive on its CEO Jeff Bezos.

Skimm Notes did a deep dive on Facebook and its battle with Fake News.

Fan base: More than 2 billion people use the co’s Android operating system. Many of its other products have more than 1 billion users (Gmail, Google Maps, Chrome).

In the past few years, the feds, Congress, and state officials have become increasingly concerned that these companies hold too much power over things like prices, have been misusing users’ data, and have too much control over both their respective platforms and the services marketed on them.

Think about it this way: Apple created the App Store, and has control over which apps get featured on it, including its own. Google has its search engine, but it also has services and products that it promotes through that search engine, like Google Shopping. These fall under antitrust concerns. Here are the main issues people are raising with Big Tech:

Good question. California is set to enact a new consumer privacy law next year. But there are concerns about states individually taking on this issue, creating different laws across the country. Congress and the White House agree there needs to be a federal law regulating how companies gather and use data. But there’s been little progress on actually crafting that legislation. Although lawmakers have held multiple hearings on Capitol Hill where they’ve grilled big-name tech execs like Zuckerberg and generally made it clear that they’re not happy with Silicon Valley. In the meantime, here’s what you can do to protect yourself.

Team ‘I think we need to break up’ says it’s time to cut Big Tech up into pieces. That these companies have become monopolies, decreasing competition, giving consumers fewer choices, making it easier for the cos to get away with things like undermining user privacy, and even contributing to income inequality. One high profile member of this camp is Dem presidential candidate Sen. Elizabeth Warren (D-MA).

Team Leave Them Alone says that in fact, Big Tech has encouraged innovation. EG: Amazon has forced other retailers to do things like adopt two-day shipping and create self-checkout apps. This team acknowledges that there may be some concerns with the way these companies handle data security and free speech on the platforms. But those issues should be addressed individually. A government breakup will only end up hurting consumers.

Team By All Means, Regulate includes some tech execs who aren’t necessarily calling for a break up, but say the gov needs to give Big Tech some “guardrails.” They say that internet companies need to be held accountable for the content that gets published on their platforms. And that the future of strong democracies is at stake.

These companies are under a microscope. There are now around a dozen inquiries or investigations into these companies across the federal, state, local, and congressional levels. Plus a few resolved cases that ended in Google and Facebook paying hundreds of millions, and in some cases billions in fines.

They’re being asked to answer to the public. Executives have been grilled by lawmakers in public hearings on Capitol Hill, on everything from how they operate their marketplaces to whether they censor conservative voices. And there’s bipartisan support (shocking, we know) for keeping a leash on these companies by regulating.

They’re dealing with growing mistrust. Polls show that close to half of Americans think social media is hurting free speech and democracy, and about half support regulating tech companies. But 40 percent say ‘leave them be.’ So it’s pretty spilt. More recently, Twitter and Facebook have gotten caught up in a showdown over political ads. Facebook policy allows political ads even if they include false or misleading info. Zuckerberg has defended the policy by citing “free expression.” Twitter on the other hand announced plans to ban political ads. It’s just one example of the larger debate about whether and how these platforms should police content, and whether they can self-regulate.

Big Tech revolutionized 21st century life. The way we shop, the way we communicate, what we watch, what we listen to, what we read. Now it faces a reckoning over whether that revolution has harmed consumers. And what happens next could shift the balance of power for some of the most influential companies in the world.