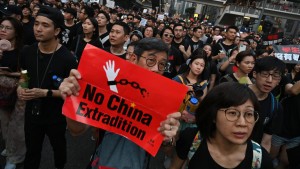 A proposed extradition law in Hong Kong has led to some of the largest protests in the territory’s history. And is raising fears about China’s growing influence there.

Influence. What kind of influence?

Let’s start with some background. Modern China has been ruled by a single party – the Chinese Communist Party – for decades. Disagreeing with or speaking out against the CCP is considered a major party foul. And the country is known for exercising a lot of control over citizens. Including using violence to crack down on protesters, plus using surveillance to monitor text messages, and even whether people are jaywalking. And killing any chance to go down a Google rabbit hole...by censoring websites and web searches.

Seriously. On top of all this, China has been practicing its power stance in the mirror. As in modernizing its economy by investing in technology, pouring money into its military, and rolling out initiatives like a massive infrastructure project to connect Asia, Africa and Europe. It’s the most populous country in the world and the second-largest economy. And President Xi Jinping has grand plans for total domination.

Well for starters, last year China’s legislature voted to get rid of presidential term limits in the country’s constitution. Meaning the road’s clear for Xi to rule for, umm, ever. Or at least indefinitely. His goal is to establish China as a global power to be reckoned with. Throughtrade, diplomatic ties, fighting gov corruption at home, and keeping a very close eye on China’s neighbors.

What do you mean by the neighbors part?

Hong Kong…a former British colony that was handed back to China in 1997. The deal was that Hong Kong got to continue mostly doing its own thing for 50 years. Think: its own laws, justice system, and economy. While China handles defense and foreign affairs. The jig is up in 2047. But under Xi’s leadership, China has shown signs of getting handsy ahead of schedule. Think: increased authority over Hong Kong’s elections. And an extradition bill that’s been making headlines recently.

Taiwan…a democratic island off the southeastern coast of China. In the ‘90s, the two agreed that there is only ‘one China’ and Taiwan is a part of it. But both sides are allowed to have different interpretations of what this means in practice. If you’re thinking ‘huh?’ you’re not alone. Taiwan’s feelings towards China have gone hot and cold over the years. Today, the two have close economic ties. But Taiwan’s ruling party wants China to back off. Meanwhile China very much wants to make Taiwan an official part of the fam and takes steps (like trying to prevent Taiwan from joining international orgs) to make sure the island doesn’t move towards independence.

What’s this about an extradition law?

We Skimm’d that here and here. We get into the latest, and the global impact of China’s controlling behavior in theSkimm app. Every week, the app goes deep on a different news topic to give you the context you need to understand what's going in the world. Download the app now, and you get the first week free.