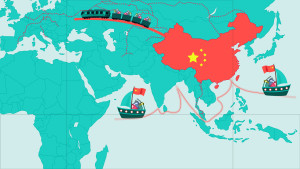 In 2013 Chinese President Xi Jinping announced a proposal for massive global investments in infrastructure and trade. The idea drew from the ancient Silk Road: a network of routes, spanning thousands of miles, that traders took to transport goods between the east and west for thousands of years. It basically made global commerce a thing. The new proposal would essentially be Silk Road 2.0 -- and would become known as the Belt and Road Initiative.

Give me the details…

The Belt and Road Initiative, or BRI, is about re-establishing trade routes from China to the rest of the world. President Xi said that proposed route would represent, “the biggest market in the world with unparalleled potential.” We’re talking new roads and railways, but also new ports and transportation hubs. And a lot of countries want to be on board: according to some reports, Belt and Road could link over 60 countries. A Chinese state-run news agency reports that China has signed cooperation documents with 125 countries. But even by conservative estimates, this huge network would connect China to about a third of the world’s nations.

That’s a big deal for China. And for the countries that are joining: they’re excited to sell their resources to global markets, including one of the biggest markets of them all: China.

Kinda. But it’s also incredibly expensive, and extremely risky. Especially if the countries don’t have the money to front the projects. They might borrow the money they need from China, then -- when they can’t pay their debt -- strike a deal with China to give them more control. That’s what happened in Sri Lanka. Critics are calling it “debt trap diplomacy” and are warning countries to be careful about the deals they make to get in on the BRI.

It doesn’t stop there. Military analysts are worried that letting China have control over ports, infrastructure projects or the land they’re built on might mean that these sites could be used for military purposes. That happened in Djibouti, which now holds China’s first overseas military base. Just miles from a U.S. military base. There are reports that a massive Chinese project in Cambodia is also being designed to possibly host military assets in the future. And the same goes for a major port under construction in Pakistan.

The Belt and Road initiative is China’s grand vision to establish a new Silk Road … a major trade network connecting Asia, Africa, and Europe. It’s the most ambitious infrastructure development effort ever, including new roads, rail lines, maritime ports, and more in the different countries that get on board. And they’re putting billions of dollars behind it.

But it’s been drawing a lot of criticism. Experts worried that China controlling a bunch of ports and transport hubs could put them in a position to control the trade routes and box out other countries, including the US. This could mean that Belt and Road may be setting China up not just to become an even stronger economic power - but also stronger military force. Around the world.