The future of football 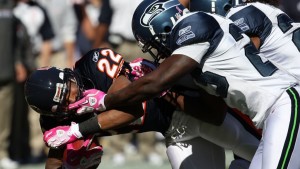 Football – that is, American football because this is not a guide about soccer – got its start in the late 19th century on college campuses. Back then it was a mashup of soccer and rugby. Until Walter Camp aka the “Father of American Football” showed up and made a few crucial changes. Camp played the game while he was a student at Yale and is credited with things like getting rid of the rugby-style “scrum,” coming up with the quarterback position, and making teams give up the ball if they don’t advance a certain number of yards within a certain number of tries (read: downs).

So it was a college game. How’d it go pro?

The first pro football player was a guy named William “Pudge” Heffelfinger. Say Pudge Heffelfinger five times fast. He was paid $500 to play a game in 1892. You could say the rest is history but we’re here precisely not to gloss over this stuff.

Oh thanks. Professional teams started forming over the years but it was a bit chaotic – players playing for multiple teams, college players taking on pseudonyms in order to make money in pro games. But in 1920, a group of team reps got together and established the American Professional Football Association, putting uniform rules in place. It was later renamed the National Football League. Nearly 100 years later, here we are.

How did the sport get so big though?

There are a range of thoughts about that. Here are a few:

Today, pro football is a $9 billion industry. And it has consistently ranked as Americans’ favorite sport to watch for decades. But there’s trouble in paradise and we don’t just mean with Blake and Hannah G.

What do you mean then?

A few years ago, viewership started to go down. The sport has dealt with its share of scandals – related to alleged violent behavior by players, alleged poor treatment of NFL cheerleaders, and the controversy surrounding players kneeling during the national anthem.

All of this could’ve factored in to popularity taking a hit. Although last season, viewership was on the up and up again. But every year, a larger issue grabs headlines, and could threaten the future of the sport. That brings us to...

Football is a contact sport. For years, that’s led to concerns about players’ safety, especially related to head injuries. And in the past few years, a growing body of research has linked football with CTE, or chronic traumatic encephalopathy.

Correct. CTE is a degenerative brain disease linked to repeated blows to the head. It can lead to symptoms as severe as parkinsonism (which affects your body’s motor skills similar to Parkinson’s disease) and dementia. A recent study of former NFL players’ brains found CTE in 99% of them. Yes, we said 99%.

I’m going to need a sec to process that.

Understandable. For years, the NFL pushed back against any evidence that football was linked to CTE. 2016 was the first time the league publicly acknowledged a connection between the two. That same year, the NFL reached a $1 billion settlement with thousands of former players who had sued, alleging the league covered up what it knew about links between concussions and CTE. The league didn’t admit wrongdoing.

To be sure, there’s still a lot we don’t know about the disease and how pervasive it may be. That’s because CTE is typically only diagnosed after death, and usually only when families agree to donate a loved one’s brain to research. It’s also important to note that not all hits to the head result in a concussion, and getting a concussion doesn’t mean you’ll get CTE.

But...probably still want to avoid those.

Yes. Concussions can lead to things like headaches, dizziness, or amnesia in the short term. In the long term, they can lead to depression or PTSD. Plus, if you’ve had one, you have a higher risk of getting another one – and that can make symptoms worse.

To let kids football or not, that is the question.

Team At Least There’s Progress includes parents who say they’re letting their kids play because of the changes being adopted by youth football leagues to make the game safer. And says that while football is singled out, other sports like gymnastics can also be dangerous.

Team Black Brains Matter says that there’s growing evidence linking football and the risk of CTE. And that since the majority of pro footballers are African American, these players will be disproportionately affected and should think twice about taking the field.

Team It’s Complicated points out that even though football is dangerous, some families don’t feel like they have the luxury of keeping their kids away from it. Particularly because the sport can give minority children from lower-income households an opportunity for upward mobility.

This is a hot topic and there are a range of other thoughts, from banning youth football altogether to at least banning tackling while kids are young and their brains are still developing.

On communities...since 2008, high school football participation has dipped more than 6%. Some teams are struggling to get enough players and are canceling their varsity programs. At the same time, there’s increased interest in other sports, like soccer. Meanwhile, the country’s largest youth league has been trying to address parents’ concerns by adopting new safety measures, like reducing the amount of time kids can participate in contact drills. Some parents are opting to keep their kids out of contact football altogether: flag football has become the fastest-growing team sport in recent years.

On politics...the topic of the future of football in the US has become polarizing, especially as lawmakers have intro’d bills at the local level aiming to regulate the sport. Some want to ban tackle football below a certain age, leading to debates about government overreach vs the government’s role in setting safety standards (some point to laws requiring car seats for kids).

On the NFL...it’s been banning older helmets that don’t meet new safety standards. Some players have started to wear new helmets designed to soften the blow of being hit in the head.  The NFL has also given grants to flag-football programs and funded the Heads Up Football initiative, which is what it sounds like: it teaches youth football players to keep their heads up when they tackle, leading with their shoulders instead. Although it hasn’t come without controversy.

So far, none of the current trends seem to be having a catastrophic impact on football overall. It’s still the most popular sport to watch in the US and has the highest participation rate among high school boys. But some still warn that the game’s downward trends will only continue. It’s too early to say exactly what that could mean for a multi-billion dollar industry.

Football is an American institution. But its role in society is being questioned. Now, every phase of the game – from youth leagues through the pros – has reached a turning point of either adopting more safety measures to help keep up interest, or risk diminishing the game’s influence on American culture.