Going for Gold – and Green: Equal Pay in Sports 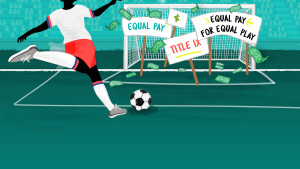 The FIFA Women’s World Cup has kicked off, and the US women's national soccer team is defending its championship title - while also defending a class action lawsuit for equal pay and working conditions.

Who do they think they are?

Really, really good soccer players. They’ve won three World Cup trophies and four Olympic gold medals. Their final match in the 2015 World Cup is the most-watched soccer game in US history. And they haven’t made as much as the guys on the US men’s national soccer team since day one, even though the men’s team isn’t as accomplished.

Depends how you look at it. Players on the women’s team get paid a base salary and benefits, with bonuses for winning a game. Players on the men’s team get paid for each game they play, along with victory bonuses. So it’s a little like comparing apples to oranges. But if you look at each team and each game, the women say they are playing more games and getting paid less per game.

It’s all about the Benjamins, baby.

So what are they doing about it?

Five players filed a complaint with the Equal Employment Opportunity Commission in 2016, but nothing happened for three years. So then all 28 members of the women’s national team filed a class action lawsuit on International Women’s Day this year. That lawsuit is still pending in the courts, but the team is taking their case to the court of public opinion. And they’ll be defending their soccer title at the FIFA Women’s World Cup in Paris this month.

Female athletes are still fighting for equal pay and opportunities in 2019. The US women’s national soccer team has been fighting for equal pay for years, and their recent lawsuit still hasn’t been addressed by the courts. And they’ve just gotten the ball rolling in a fight for pay equality; other female athletes are taking a page from their playbook, too. Women are going for the gold – and the green.