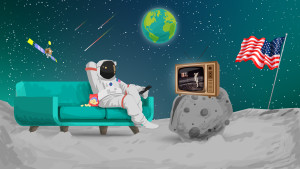 Fifty years ago this week, 600 million people watched as Neil Armstrong and Buzz Aldrin became the first two humans to walk on the moon. Mike Collins was in the Command Module, holding down the fort. It was a “small step for man, a giant leap for mankind” -- thanks to hundreds of thousands of engineers, scientists and technicians, billions of dollars, three brave astronauts and the largest rocket ever built.

It was. In 1961, JFK said it was time to put a man on the moon. NASA heeded the call -- but it took years and many trial runs -- some of which ended tragically. NASA not only had to build a machine that worked, they had to make it so astronauts could live and eat up in space. Some of the things NASA developed at the time -- like freeze dried food, microchips, and mylar blankets -- are still around today.

Yeah -- like we said, it was huge. And Apollo 11’s lift-off was just the first of many things that could have gone wrong -- but didn’t. There was also the 180-degree spin the astronauts had to perform in space to access the Lunar Module (aka the Eagle.) There was the time Neil Armstrong had to override the Eagle’s autopilot to properly land on the moon’s surface. And then there was the matter of getting off the moon -- which many were worried wouldn’t work. President Nixon even had an obituary prepared, just in case Armstrong and Aldrin they got stranded there.

For real. But in the end, it all worked out. Armstrong and Aldrin packed up the world’s first moon rocks and dust samples, and hauled them back to earth: landing with a crash-boom-bang into the Pacific Ocean on July 24th 1969. They emerged from the command module as American heroes -- but they never went back to space.

But others did, right?

Yep -- NASA sent astronauts to the moon five more times. But the moon trips stopped in in 1972. Interest was waning, and other things  -- like the Vietnam War -- were taking precedence.

Kinda, yeah. But now NASA is planning a comeback -- for good. They want to get to the moon by 2024. President Trump says it’s time we expand our reach within the solar system, and going back to the moon is step one. So NASA is teaming up with other countries and companies to make it happen.

Fifty years ago this week, Neil Armstrong and Buzz Aldrin became the first humans to set foot on the moon. It was the result of years of planning, billions of dollars, and thousands of people helping - an incredible feat that helped scientists learn more about how our solar system works. The trips stopped in the early ‘70s, but now President Trump says it’s time to go back: by the year 2024.