Breaking down all the different international terror groups | theSkimm
Subscribe

Breaking down all the different international terror groups 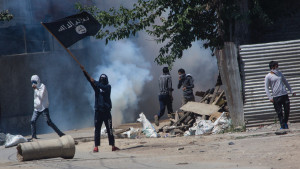 There are good guys, bad guys, and these guys. Welcome to International Terror 101.

al-Qaeda...The Godfather of terror groups. Founded by Osama bin Laden in the late ‘80s, and responsible for the 9/11 attacks. Its goals are to install Islamic governments, and get rid of any Western influence along the way. Post 9/11, the West fought back -- and since then, most of al-Qaeda’s leadership has been taken down, and the group has become less centralized. Now, it’s more focused on its “affiliates” around the world.

Taliban...Afghanistan has 99 problems and the Taliban is number one. This is the Islamist extremist group that basically ran Afghanistan in the 90s and that -- bonus! -- the CIA actually once backed. It also provided a safe-haven to al-Qaeda, which is why the US took the group down after the 9/11 attacks. Since then, the Taliban has re-grouped in rural Afghanistan and across the border in Pakistan, where it enforces lovely things like no school for women.

AQAP...al-Qaeda’s affiliates in Yemen and Saudi Arabia got married and called themselves al-Qaeda in the Arabian Peninsula -- or AQAP. They claimed responsibility for the 2015 terrorattack on Charlie Hebdo in Paris and are considered one of the biggest threats to the West. Plus they're taking advantage of Yemen’s civil war and seizing land in the middle of the chaos, so the group is on everyone’s radar.

al-Shabab...al-Qaeda’s Somali cousins. You know them as the ones responsible for several large attacks in the past few years. They orchestrated a mall attack in Kenya’s capital in 2013, and the 2015 attack that killed 148 people on a college campus there. In 2016, they stormed a Kenyan base in Somalia, reportedly killing 180. Al-Shabab’s MO? Enforcing Islam, while killing others along the way -- in the college attack, the gunmen targeted Christians.

al-Nusra Front...A Syrian rebel group that got together to fight President Bashar al-Assad. It’s also pledged allegiance to al-Qaeda. They’re in the awkward position of wanting to appeal to Syrians, while also staying loyal to a group that many Syrians hate. And speaking of…

ISIS...or ISIL or IS. It’s the P. Diddy of terror groups, always changing to a worse name. And they're responsible for many of the terrorist attacks against the West in recent years. Al-Qaeda decided in 2014 that it was too extreme to hang out with. So there’s that. The group spent a lot of time grabbing territory across the Mideast, terrorizing minorities, and beheading Westerners, all while attempting to build an Islamic State. This led the US and friends to move in with airstrikes. A few years later, the war isn't over yet, but ISIS is losing ground.

Boko Haram...Attention hogs based in Nigeria. The group killed more than 10,000 people there in 2015. It’s also infamous for kidnapping more than 200 Nigerian schoolgirls. And they've pledged allegiance to ISIS. The Nigerian gov has had trouble fighting the group. Like that time their air force accidentally targeted a camp for displaced people instead of Boko Haram operations.

Hamas...A Palestinian militant group that doubles as a political party. It controlled the Gaza Strip, a Palestinian territory, for years. The group’s platform? Destroy Israel, and establish a Palestinian state. No surprise, this hasn’t gone over well with Israel. The two have a long history of violence and war. Iran’s been Hamas's longtime sugar daddy, despite a falling outfor a few years.

Haqqani Network...They’re the Sopranos of terrorism -- a family-run insurgent group with ties to Afghanistan and Pakistan. They also own car dealerships and construction companies. Known for attacks on westerners in Afghanistan. Also has ties to the Taliban and al-Qaeda.

Khorasan Group...The al-Qaeda All Stars tour that operates out of Syria. It’s considered a big, scary deal because the group is focused on recruiting Westerners to carry out terror plots back home. They've been quiet for the last couple of years.

The West has spent trillions fighting terrorism abroad, and unfortunately, taking out a group’s leaders doesn’t take out a movement.