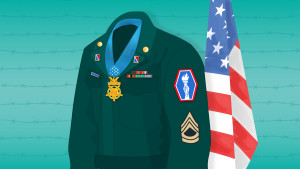 It’s known as a “date that lives in infamy”: The attack on the U.S. Naval Base Pearl Harbor by Japanese forces on December 7th, 1941. It launched the US into World War II. The conflict would go on overseas for years, with the US fighting alongside Allied forces Britain and France against the Axis powers of Germany, Japan, and Italy.

Back in the U.S., the attack on Pearl Harbor fueled anti-Japanese sentiment. President Roosevelt signed an executive order a few months later that resulted in the imprisonment of an estimated 120,000 people of Japanese descent in internment camps throughout the U.S.

A lot of the people interned were Japanese-Americans, or “Nisei”, who were born in the U.S.. They were American citizens by birth. Many didn’t speak Japanese and had never been to Japan, but a lot of Americans including government officials saw them as threats to national security.

But as the war went on and the US needed more men on the front lines, the Army started asking for volunteers from the internment camps. Thousands of Nisei men answered the call to risk their lives - even though their families were still being held in the camps. They wanted to prove they were loyal American citizens.

The men didn’t know it at the time, but they would become a part of one of the most legendary military units in American history: the 442nd Regimental Combat Team.

The 442nd Regimental Combat Team was a racially segregated military unit that fought some of the toughest battles in the most difficult conditions. Their unit motto was, “Go For Broke” and they’re most remembered for their heroic rescue of the Lost Battalion. An Army unit was trapped for six days in the mountains of France surrounded by German forces. After previous rescue attempts had failed, the 442nd came in to save the day, but suffered a lot of casualties in order to do so.

It wasn’t their only victory: The 442nd Regimental Combat Team - which includes a unit of Nisei soldiers who were recruited before the ban on Japanese-Americans serving took place - is one of the most decorated units in U.S. military history. Their combined awards include 7 Presidential Unit Citations, 4,000 Bronze Stars, over 9,000 Purple Hearts, and 21 Medals of Honor.

The way Japanese-Americans were treated in the U.S. during World War II is a dark chapter in American history. After Nisei soldiers returned home from war and internment camps were shut down, there was still a lot of racial prejudice. Since then, the US has worked to come to terms with this. There have been formal apologies from the government , reparations payments under the Civil Liberties Act, and thousands of military awards honoring their actions during the war.

Today the 442nd Regimental Combat Team and all the Japanese-Americans who fought during World War II are remembered for their legendary heroism and loyalty in the face of unimaginable circumstances. April 5th is now National “Go For Broke” Day honoring the motto of the men who wagered everything.