Labor Unions: How workers got their rights | theSkimm
Subscribe

Labor Unions: How workers got their rights 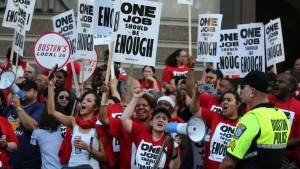 Labor unions have been around for decades, but they’re not getting as much love as they used to.

Labor unions are groups of workers that band together on work-related decisions (think: hours, wages) through collective bargaining. Members pay dues that go towards things like representation, political campaigns, and paying union leaders and staff. Union reps negotiate with employers on their members’ behalf.

Where did this idea come from?

The idea dates back as far as the 1700s, when printers in New York joined forces to ask for a wage increase. But unions didn’t really pick up steam until after the Civil War, when the US started to industrialize. Enter: the Industrial Revolution.

Right? The uptick in mass production meant more jobs. Plus an influx of immigrants coming to the US meant more people willing to take on those jobs. These circumstances created a power gap between employees and their bosses, who could get away with paying workers low wages and forcing them to work long hours.

I see where this is going.

Yep yep. Workers started to fight back through labor organizations. In 1935, President Roosevelt signed the National Labor Relations Act (aka the Wagner Act), establishing the right to join a union, go on strike, and collectively bargain (though it’s still illegal for federal workers to strike).

And, let me guess, the rest is history?

Sorta. Union membership hit its peak by 1954, when about one in three Americans were part of one. Though union membership has gone down in recent decades (stay tuned for more on that), there are still millions of people in the US who belong to unions. Here are some of the reasons you may have heard about them lately:

Unions are dealing with a crisis. After declining for decades, union membership is at a historic low. In 2018, only 10.5% of American workers were part of a union, compared to more than 20% in the early 1980s.

A few things. One of the biggest factors has been the fall in manufacturing jobs, an industry where union membership has historically been high. At the same time, some of the fastest-growing industries – like health care and hospitality – are ones that haven’t typically unionized. Government policies have also hurt union influence, like the time President Reagan fired more than 11,000 air traffic controllers for violating federal laws against striking. The move seemed to put a chill on work stoppages, which have dropped significantly since then. And there’s something else that threatens the future of unions.

Right-to-work laws. Let’s take a step back. In the past, some states required employees to pay union dues even if they weren’t part of the union. The idea being that they still benefited from the union’s work through things like better negotiated wages and benefits. But in 2018, the Supreme Court ruled that public-sector workers don’t have to pay fees for collective bargaining. It was a big W for so-called right-to-work states, where laws say that employees have the ‘right to work’ without paying union dues if they’re not part of the union.

And I’m guessing unions weren’t too pleased with this?

No. It’s been a little more than a year, so there’s not a ton of data that gives us a read on the fallout of the decision. But spoiler, many expect union membership and dues to suffer. And with less money to go around, unions may focus more spending on things like recruitment, and less on political mobilization. And that could impact the future of US politics. Which brings us to...

On politics…research shows that union members are more tuned in to politics than non-union members. Unions donate millions to Dem candidates and tend to have a lot of influence in local and federal elections. They helped President Obama win both in 2008 and 2012, but they also helped President Trump win in 2016 – hoping that his pro-business agenda would help out blue-collar workers. One study shows that in states with right-to-work laws, voter turnout goes down and Democratic candidates do worse. Experts say low union membership could affect the political landscape of the country.

On the economy…union members typically earn 27% more than their non-union counterparts, and unions have helped close the gender pay gap. Recent research also shows a couple things. One: the rise in income inequality over the past few decades may be linked to a decline in union membership. And two: stronger union membership could help increase wages for all workers (even those not in unions). We Skimm'd the gender pay gap for you here.

On you…reports show the labor movement has shaped how you’re treated as an employee, whether or not you belong to a union. Spend your weekends brunching instead of working? Get overtime pay if you work late? Get time off if you have a baby? Send your thank-you cards to the labor movement.

People have been arguing over the pros and cons of labor unions for a long time.

Team Unions are For (Union) Haters Too says that labor orgs benefit all workers, whether they’re in a union or not. That union efforts to raise pay, time-off standards, and work safety guidelines impact entire industries. And that it’s in Americans’ interest to support these groups.

Team This is Bad for Business argues that labor unions negatively impact the workplace. That they raise labor costs, since they’re able to collectively negotiate wages. That they hurt productivity when workers go on strike, and restrict an employer’s ability to control promotions and firing, since unions often negotiate rules that require firings and promotions to be based on seniority instead of merit.

The labor movement has helped give employees a voice, establish higher work standards, and provide economic mobility for the middle class. It’s also raised questions about whether it hurts business growth and makes companies less competitive. One survey found that more than half of Americans think the decline of unions is bad news for workers. The question is whether, and how, unions might try to gain some of their influence back.