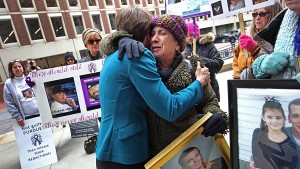 This week, the first major trial against an opioid maker kicked off in Oklahoma.

Nearly every state has brought a lawsuit against the pharma industry for its alleged role in the opioid epidemic.

We get into how the opioid crisis took off, what fentanyl is, and more, below.

What’s being done about it?

Correct. It’s also the largest drugmaker in the country. Oklahoma’s legal strategy will be trying to prove that J&J created a public nuisance by harming public health.

Who’s to blame for the opioid crisis? That’s the key question here.

Oklahoma...argues that J&J is one of the root causes of an epidemic that has killed thousands of people in the state. The state AG says that J&J used deceptive marketing that hyped the benefits of opioids to a mass market (think: people suffering from chronic pain) but downplayed the risks. And that J&J’s former subsidiaries produced a key material used in prescription opioids. It wants the company to cough up billions of dollars to help address the crisis.

Johnson & Johnson...says Oklahoma’s definition of a public nuisance is way off base. That the company produced legal, FDA-approved pain medications. And that the state – which was in part responsible for oversight – can’t tie the bulk of the crisis to J&J.

Wouldn’t everyone like to know. Earlier this year, a North Dakota judge tossed a similar lawsuit against Purdue Pharma, arguing that the state can’t blame a company for what happens to its product after it hits the market. So...we’ll have to wait and see. The trial is being televised. But there’s no jury or anything – just a judge.

Can a few pharma companies be held responsible for such a large problem?

This trial is expected to last months. And since it’s the first of its kind, the pharma industry, lawyers, and parties in similar lawsuits are watching to see what evidence Oklahoma lays out, and whether the state’s legal strategy works in court. The case could set a precedent for how other cases are resolved, including whether pharma companies decide to settle instead of going to court. More broadly, some people are watching for whether the evidence and testimony sheds light on how exactly this crisis started.

The US has been dealing with the opioid crisis for over two decades now.  And the series of lawsuits against pharma companies is giving people flashbacks to the more than $200 billion settlement tobacco companies made with states across the US in the ‘90s. Now, legal experts and health care professionals alike are keeping a close eye on whether the Oklahoma case leads to a similar widespread reckoning for the prescription drug industry.