Written in the Stars: The Story of Astrology | theSkimm
Subscribe

Written in the Stars: The Story of Astrology 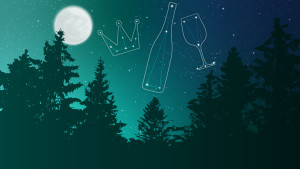 Astrology has been around for ages, and more than half of millennials think it has some sort of credibility.

But it’s as old as the stars

Not quite. Astrology is the study of the stars. Lots of ancient cultures have looked to the stars for good stories. And they tracked the movement of the stars to make plans for their futures. The ancient Babylonians created a calendar by distinguishing twelve constellations along the path of the sun in the sky. And they used that to map out when and where they should farm and move around. Those 12 constellations are known as the zodiac.

It was until a point. Astrologers started using that zodiac calendar - along with the location of the planets and the moon on the exact date, time and place a person is born - to create what’s called a natal chart. And they compared that chart to the stars, moon and planetary alignment on a given day to make predictions about what’s going to happen in the future. In the 17th century, scientists found complex mathematical calculations involved with space. They broke away from astrology and called themselves astronomers. And the astrologers got a different reputation.

Exactly. Astrology became a staple in newspapers in the mid-20th century as newspaper horoscopes took off. This British columnist decided to use the twelve constellations from the ancient Babylonian’s calendar to give readers advice based on their birthdays. Readers loved it, and a ton of newspapers started printing similar horoscope columns. They’re everywhere.

Real scientists started saying astrology and horoscopes were just pseudoscience. Neil deGrasse Tyson and Bill Nye pointed out a few logical inconsistencies, like there are factors other than the stars that could affect a person’s life, and that planets and stars have moved over the last couple of millennia.

So why are people into astrology then?

It might have something to do with their stress – at least for millennials. Millennials are the most stressed generation right now, and an old study found that people who were most stressed were most likely to be into astrology. The interest has helped astrology become part of more than a $2 billion market through apps and social media accounts.

Astrology started off as a study of the stars. Ancient cultures looked to the sky and used what they saw as a map and a calendar to predict what was to come. Then astronomy started using real mathematical calculations to understand space, and astrology was kicked out of the “science club”. But people still believed that the stars could predict your future - and tell you how to make the most of your present. Horoscope columns became popular in newspapers and “what’s your sign” became a standard pickup line. Today, even though scientists have tossed aside a lot of the ideas behind it, more than half of millennials still believe in astrology.