How Lab-created Diamonds Make the Cut 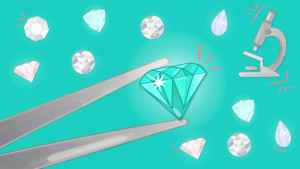 It’s the most wonderful time of the year...for people in committed relationships. Yep. Engagement season is upon us. 40% of all proposals happen between Thanksgiving and Christmas, and we found a smarter way to ring in the occasion. Meet, lab-created diamonds.

Lab-created diamonds are, you guessed it, made in a lab instead of being mined from the Earth. Scientists basically take baby diamond "seeds" (aka, a repeating bunch of carbon atoms) and carefully expose them to temperatures and pressures that mimic the way diamonds are formed in nature. Et voila. A star diamond is born.

So... they’re not just a girl’s best friend.

They’re also a geologist’s...and a jeweler’s...and a bank account’s. But despite having a close group of BFFs, there’s also a fair amount of people who say ‘no new friends’ to these kinds of sparklers. So we partnered with JamesAllen.com to debunk some of the common myths surrounding lab-created diamonds. Time to do a double-take...

Myth #1: They're not real diamonds.

Wrong. Lab-created diamonds are diamonds, full-stop. They have the same physical, chemical, and visual qualities as their Earth-created counterparts. The only difference? Where they come from.

Myth #2: They're the same as CZ and moissanite.

It’s a no from me, dawg. Cubic zirconia and moissanites’ chemical compositions are totally different than diamonds, so they really are ‘faux’. They’re worth way less than the real deal. (Around $20 per one carat versus $1,500 for a one carat diamond for CZ.)

Myth #4: It's easy to spot the difference between lab-created and mined diamonds.

Nope. Because lab-created diamonds are chemically the same as Earth-created diamonds, not even diamond pros using a loupe (a magnifying tool used to check out small details up close) can tell the difference.

But lab-created diamonds still let you maximize your budget. Hint: buying a ring at James Allen means you pay up to 50% less than you would at traditional jewelry stores. And you could get a ring that’s 30% bigger. The secret’s in the fact that it’s an online retailer. More frost for your buck.

Slow. Clap. Really, no one can say that Earth-created diamonds are “better” than lab-created diamonds—or vice versa. Because (and we can’t stress this enough) the only true difference is the origin.

Whether you’re wink-wink-nudge-nudging your significant other into putting a ring on it, or helping a friend design their own diamond and setting combination, lab-created diamonds should be on your list of dream engagement to-dos. Cause if you like it, then you should’ve...you know the rest.