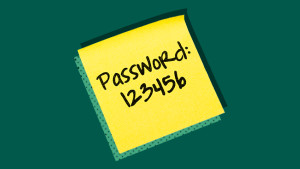 Hey. It’s been a tough couple of weeks. Our hearts are with all of you and those who have been personally affected by the tragic shootings in Atlanta and Boulder.

Know this: women are not the problem. Calling out inequality is the first step to changing it. But changing it isn’t about telling women to choose higher-paying fields. Or to stop prioritizing flexibility when they have kids. Or to take any other advice that makes women responsible for a fix. Employers and the gov need to step up to close the gap. So let them know it. Talk about work and money with your coworkers, friends and fam – anyone who will listen. Because to get a real Equal Pay Day worth celebrating one day, everyone needs to hear it.

If all your passwords are the same…

Mix it up. (Spoiler: "yourdogsname789" is as easy to hack as it is to remember.) Weak and outdated passwords are a common cause of identity fraud, which one study says cost Americans $56B in 2020. Pro tip: throw extra numbers, letters, and/or special characters into new passwords to make them stronger and harder to guess. A digital password manager can help keep them safe and not forgotten.

If you’re the fixer in your friend group…

Let these problem-solving products do some heavy lifting. From containers that keep your food fresh for longer to a fabric shaver that helps you revive your clothing and avoid having to replace certain pieces every season. Even better: everything's under $50. Thank us later.

NFT: Non-fungible token, or a unique digital asset as irreplaceable as Beyoncé. Think: Twitter CEO Jack Dorsey’s first-ever published tweet (which sold for $2.9M), a digital collage by artist Beeple (sold for a record $69.3M), and the world’s first digital NFT home (sold for more than $500K). When you buy an NFT, you get a token secured by blockchain technology. (Hint: blockchain is a decentralized database that tracks who owns what.)

Why is this a thing? NFTs can be a new source of revenue for Internet creators and their supporters. Plus, pandemic boredom and apps like Robinhood made it easier for people looking for new ways to invest, helping drive interest in NFTs, "meme stocks" (hey, GameStop), and other investment manias. Warning: they're not called manias for their safety and reliability. If you want to try investing in them or other extra-risky assets, resist the urge to follow the crowd and go all in. And instead limit it to a (very) small portion of your portfolio.