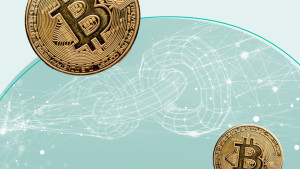 If you’ve got a friend who's obsessed with crypto, you’ve probably heard the term “blockchain.”

True. But what is it?

In short, a type of database. Bitcoin and other kinds of cryptocurrencies use blockchain as a digital ledger to publicly record and verify each transaction (read: every time it's bought, sold or spent).

And how does that work?

Like really high-tech Legos. Data is stored on a network of computers (aka nodes). To add a block to the chain, nodes must show that they have done “work” by solving some complicated math problems. That's called mining. And each block in the chain contains a unique set of data. When a new block is added, it's given a timestamp, creating a timeline of data locked in place. That makes it tough to hack or counterfeit.

Is it really secure, though?

In theory, yes. Each block contains its own hash code, which is a string of random numbers and letters assigned to each block. Plus the hash of the block before it. If that information is edited in any way, the hash changes, too. So it’s hard for anyone to go back and change info unless others on the chain say it’s okay. More on that later. FYI: that level of security is useful beyond the world of crypto.

So get used to blockchain?

Yep. The tech probably is here to stay. And some industries have already begun to adopt it. One example: food. Blockchain is used to record the route that certain food products take, making it easier to find the sources of E. coli or salmonella outbreaks and recall products. Other possible uses: to maintain medical and property records and facilitate a secure, transparent voting process.

But it does have some major cons. Like leaving a big carbon footprint: the energy used to mine Bitcoin and add to its blockchain is about the same amount consumed by a small country. There are also some issues with scalability. Because of the way blockchain builds on itself, the tech gets slower and more bloated as it grows. Plus, too many users on the network can cause congestion.

And remember when we said blockchain was hard to hack? It is...but it’s not impossible. Enter: the 51% attack. If a hacker gained control of even a slight majority of the network, they'd have the power to edit or delete blocks off the chain entirely. This kind of attack is unlikely. But in the case of crypto, it'd give the attackers a mining monopoly and virtual control over the currency's value – making the possibility a real concern for investors.

If you really want to understand crypto, get to know blockchain. It's the tech that makes Bitcoin – the OG crypto – possible. And has the power to change whole other industries, too.