theSkimm on the Gender Wealth Gap 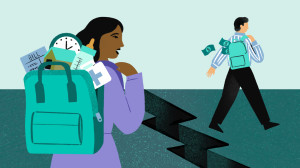 The gender gap is more than women earning 82 cents for every dollar paid to men. Introducing: the wealth gap.

Do I want to know more?

Knowledge is power. Beyond income inequality, the gender wealth gap shows how much money women vs. men are able to keep and grow. And spoiler: the financial facts are stacked against women, especially BIPOC women.

Yup. And the pandemic made it all worse: women (again, especially BIPOC women) are losing more jobs, getting hired less, and spending more time on caregiving. Decades of progress toward gender economic equality has been undone in months.

Now I'm depressed, thanks. Is there any good news?

You can fight back. Starting with getting your own finances in order.

If you have debt…

Prioritize paying it off. Because being in the hole makes it harder to reach your money goals, especially ones that could help you accumulate wealth. Like owning a home and investing for the future. Speaking of investing...

If you don't have money in the stock market...

Work on changing that ASAP. Because the sooner you start investing, the more time your money has to grow. And you don’t need a lot to invest regularly. Many investing platforms have no account minimum, and you can start buying with as little as $5. If you're already investing for retirement, try to increase your monthly contributions by at least 1% of your salary every six to 12 months. And whenever you get a raise.

If you deserve more money...

Ask for it. Talk to your boss about whether a raise or promotion can be in your near future. If you hear 'no,' get some feedback and revisit the convo in a few months. You can also consider earning extra money with a side hustle. No matter what, be your own advocate. Revamp your resume and LinkedIn profile, sharpen your skills, and lean on your network to find every opportunity you can.

*Taking notes.* What else can I do?

Vote. A lot of these problems are ingrained in the system and require major policy changes to fix. Back candidates who support making those changes (think: promoting pay transparency, adopting national paid family leave, and addressing caregiving needs) a priority.

Support other women, too. Invest in and shop at women-led businesses. Even when money's tight, you can lift them up by leaving positive reviews and tagging them on your social media. Also – and this is important – normalize talking about work and money with your friends. Celebrate their professional and financial accomplishments just as much as personal milestones.

Oh, and when you shatter that glass ceiling, help clear the way for the other women following you up. Elevate their voices and make room for them to contribute ideas and showcase their skills.

The gender wealth gap is a complicated problem we can't fix on our own. But you can make a difference for yourself by making your finances a priority. Lift up other women by being intentional about who you vote for, which businesses you support, and how open you are about money with your friends.